A lot of adventure games have done the player choice thing by now, but ever since Telltale’s The Walking Dead appeared as the dominant player in that field, most of them have chosen to tell the same story: what if every choice you made was actually the wrong one? Loads of imitators, and even some of Telltale’s later offerings, have felt the need to be so oppressively sad and “emotional” that they forget that there’s more than one emotion. Thank goodness, then, for King’s Quest – a game that many people seem to have forgotten thanks to its, ahem, “erratic” release schedule, but one which I will nonetheless remember as having the single best story in any videogame to come out this year.

In King’s Quest, the protagonist dies at the end. That might sound like a spoiler, but it’s actually something that’s established in the very first episode. King Graham is old, and he’s lived a full life, and the game therefore becomes not about trying to shock you with a surprising twist, but with celebrating a life well lived. When Graham does finally pass on in the game’s final episode, it feels like you’re losing an old friend or a treasured relative, and perfectly captures the feeling of understanding that it was their time while still fiercely missing them in a way no other game has ever even properly attempted. Not to say that it’s a depressing game – it’s actually one of the funniest I’ve played this year, packed with likeable characters, witty dialogue, and so, so many puns. King’s Quest is an impossible balancing act – something joyous yet sad, something that appeals to longtime fans of the series while also pulling in new players, something which pruned away the worst parts of the original games while keeping the heart and soul that made them beloved by so many. It’s a masterpiece of interactive storytelling, and if you’ve let it pass you by, you owe it to yourself to at least give it a look.

Oh, and the voice acting’s fantastic. In the not-altogether-unlikely event that this is Christopher Lloyd’s last role, at least he went out on an absolute triumph of a high note. A lot of games made it onto this list because they do something that’s not particularly brilliant or surprising, but they do it really, really well. That’s a fine thing, and worth celebrating, but I’m glad that we’re also taking this time to showcase a game like Pony Island – a truly unique, nearly impossible-to-describe experience that’s not like anything else on the market. When I reviewed it in January I called it “the best gaming experience you can have for $5”, and more than a year later I still stand by that assessment.

Pony Island begins in the guise of a fairly simple platformer, something you might well see on a mobile device. You play as a cute, pixelated pony, jumping over obstacles with the mouse. After a few levels, as these games are wont to do, Pony Island informs you that in order to proceed, you must make an in-app purchase. Specifically, in order to continue to the next level, you will have to sell your soul. From there the experience becomes increasingly surreal, as players split time between code-hacking puzzle sections, the increasingly demonic pony platformer, and minigames like “Settlers of Satan.” The game also features some awesome boss battles, including one that breaks the fourth wall in a way that makes even Undertale’s Sans or Metal Gear’s Psycho Mantis look like amateur hour stuff.

The premise — a cute, entertaining game that doubles as a Faustian pact — is interesting enough on its own that a lesser developer would have left it at that without expanding much on the concept. Instead, Daniel Mullins created a deft, fascinating plotline that sucks you in and keeps you guessing, never knowing quite what’s going to happen next. As the game goes on, it becomes less and less clear whether Satan is making Pony Island (the game-within-a-game) more fun in order to steal your soul, or because he genuinely cares about giving you a great gaming experience. Deals with the devil are often portrayed as attractive to the character making them, but never before have they been so attractive to the audience — in this case, the player.

So, yes – as ridiculous as it sounds, one of the smartest games of 2016 is a game called Pony Island. Ten out of ten, would kill Jesus again. Civilization 6 is one of those “givens”. The sixth installment doesn’t disappoint, and even though it’s very similar to its predecessor, that’s actually a good thing.

It’s a digital, turn-based boardgame where players choose a culture and move them from prehistory through towards the space age. The campaigns are set across a massive board that functions as the game’s world, which players must explore and exploit. Naturally, conflict arises when you meet other intrepid civilizations who see you as an obstacle in their quest for greatness. Players may choose to flex their military muscles, dominate the world’s culture, or achievement victory diplomatically.

Like the previous entry, gameplay takes place across a series of hexagonal tiles. The environmental is cleverly designed to look natural, and the eyecandy is even more gorgeous than before. Features like city unstacking and bonuses for optimal hex placement make the game more engaging than ever before, and the inclusion of Eureka Moments really help keep things fresh and dynamic. The AI has received a major upgrade too, with multiple “agendas” that roughly correspond to those of actual historical figures. It may not be quite as deep as previous entries, but it’s streamlined, smooth as silk, and it functions as the seminal example of electronic board gaming. If you’re any sort of fan of the genre, or a longtime Civilization aficionado, you owe it to yourself to play this. Dead Rising 4 doesn’t quite match up with its predecessors, but still offers a fun gaming experience. The large open world, made for exploration and filled with discoveries, combined with the massive undead hordes that the series is known for allow for hours of pure zombie killing fun. The fun is only amplified when you throw in the large variety of weapons, and a number of new and familiar combo weapons that let you get creative when taking on the walking dead – in a way only possible in Dead Rising. After all, where else can you wipe out hundreds of zombies using a crossbow that fires swordfish – while dressed in combat boots, a dress, and a mask in the likeness of a certain green street fighter?

Despite a lacking story filled with cheesy dialogue, and characters who left no real impression, I never found myself bored during my time with the game – always finding something to keep me interested, be it testing out a new weapon I found or searching for a new combo weapon to add to my arsenal. But as much as I enjoyed Dead Rising 4, I can’t help but think about the most memorable elements of the Dead Rising experience that got removed from the game, such as the time limit and the creative psychopath boss battles, which got reduced to forgettable conflicts against what is essentially a looter with a strong weapon. It might not have been the best Dead Rising game, but Dead Rising 4 managed to be fun, unique, and worthy of its place on this list. Back in early 2015, I made a bet with some friends that Digimon Story: Cyber Sleuth would be both a mediocre experience and never come to the US. However, I was proven extremely incorrect, as Bandai Namco graced us with a fantastic rpg that has a compelling story, over 200 digital monsters to tame and digivolve, and extremely solid turn-based gameplay.

Generally a franchise primarily geared towards children, Cyber Sleuth was made with the older fans in mind that can appreciate all the intricacies that this game offers. The game’s story is clearly based towards teenagers and adults that grew up with the original anime, as well as those who follow current trends in anime in general. When not finding out just why my body is now a computer program destined to eventually evaporate into ones and zeroes, I found myself spending way too much time just talking to all of the NPCs that are scattered across Japan, listening to the techno-based soundtrack and top-notch Japanese voice acting (There is no English dub in Cyber Sleuth, for those that care about that sort of thing). Cyber Sleuth also contains quite a few side missions to net you items, an exorbitant amount of medals to collect, and even references to other games in the long-running collection of games, all contained in a well paced 30-40 hour experience.

If you are a fan of role-playing games, modern anime aesthetic, and/or a lover of stories based in cybernetic worlds. this is a must have for anybody who has a Vita or PS4, and if you are a fan of cross play, Digimon Story: Cyber Sleuth has you covered.. The only downside is the fact that the translation is a bit spotty at times, due to it being a rushed translation, though that can be charming at points. It’s the best Digimon game that has been made, and I for one, am glad that I lost this bet horribly, and am now excited to see what the next Digimon game has in store for us. 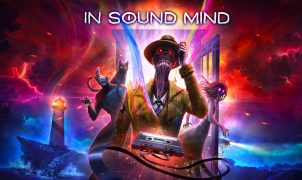 In Sound Mind Review: Neither Safe Nor Sound     Developed by indie studio We Create Stuff, In Sound Mind is a unique take on the first-person psychological horror…