The Top 25 Games of 2016 have been decided. Who will win the coveted crystal joystick? Celebrities all over the world are breathing a collective sigh of relief right now for having survived 2016 – the Saint Valentines’ Day Massacre of beloved famous people. However, though 2016 was a terrible year for the mortality rates of iconic athletes/actors/musicians, 2016 was a bumper year for gaming. Our staff got together and voted for the top titles. The results will definitely shock and surprise you! Hey, that’s democracy for you (and God knows democracy produced a lot of shocking results this year). Who will Brexit out of the pack and come out ahead? Which title will trump all others? (Ok, that’s the depressingly topical puns out of the way). Which game will hold the crystal joystick aloft over a bloodied pile of its vanquished foes? Join us as we count down the top 25 games of 2016! I was totally surprised by this one, I was. The description – an FPS where time only moves when you move – caused me to roll my eyes and dismiss it as another gimmicky indie title with style over substance. When I tried it out, I was very happy to be wrong.

Superhot makes you feel like Neo from The Matrix like no other game before it. You’ll be able to stand still and contemplate your moves while bullets hurtle towards you in microtime. Later on in the game, you gain the ability to jump between bodies. The enemies shatter like glass before they even know what hit them. When you’re out of bullets, your fists and the butt of your gun are equally deadly, as are various objects around the game world such as swords and even vases. All of these action movie tropes are complemented by a striking white aesthetic mixed in with hot red enemies, and it looks totally unique and gorgeous.

The game feeds off its own distinctiveness, delving deep into metareferrential territory as it plays out the scenario of a game within a game, boasting of its appeal and inviting players to do likewise. Amusingly, this isn’t hyperbole; it really is that good, and well worth checking out despite the short length. With a gaming community sceptical of the episodic release model and a franchise that was in serious danger of losing relevance after the poor Absolution, Hitman had quite a challenge in front of it. A rocky technical start was swiftly brushed aside by some of the best levels the franchise has produced to date. These levels all had fun ‘opportunity’ kills, like the kind you’d see in trailers. However, crucially, they were also built around a system designed for exploitation. The real joy of Hitman came in experimenting with AI behaviours and using objects in a way they weren’t strictly intended (I’m looking at you Fire Extinguisher Catapult).

The mechanics and level design also fed into one of the most engaging online components of 2016: ‘Elusive Contracts’. These nerve racking one-shots put everything the player had learned to the test and forced improvisation over save-scumming. It’s rare to play a game that evokes the feeling of tension and then satisfaction that comes from taking out a target, nabbing a disguise and walking off into the distance while all hell breaks loose behind you. As I start writing this, I keep finding myself so very amused that Klaus is on this list, and for two reasons. For one, it came out way back in January 2016, a time typically devoid of much in the way of new releases. For another, I typically have a strict personal policy against nominating a port to Game of the Year. Then along comes Klaus, hopping and running and jumping and occasionally hacking into my head and my heart, and becoming – specifically in its 2016 Playstation 4 release – one of my favorite games in its entire genre.

Klaus is a two-dimensional side-scrolling platformer developed by a small indie team known as La Cosa Entertainment. It starts out simply enough, with a character waking up in a basement and starting on a quest of running, jumping, and the usual, all against a fairly monochromatic sense of art design. Things get hectic, and kind of Super Meat Boy-esque, but then change. World 2 begins with an entire second controllable character, and the entire standard of how players are able to handle scenarios is turned on its head. The story, one narrated by its titular protagonist in words which splay out across the blank space in levels, does the same.

This is what Klaus does, and why it’s frankly kind of amazing. Each of the game’s worlds does something to turn player expectations on their heads. Each time, it’s monumental, and each time, it works. By god, it works! I still can’t even fully comprehend how La Cosa managed to smooth every inch of this game out so much. Its original release in 2015 was on iOS and Android, a poor place for a game in as dire need of controller support as this. Klaus’ adaptation to Playstation 4 gives it the tactility and exposure it needs, and makes it one of the most satisfying platformers of 2016. If you’re a fan of retro games then you owe it to yourself to play Slain: Back From Hell. Hopefully you, like myself, didn’t play Slain when it was first released back in March. Critics panned its unfair gameplay, shoddy controls, and weak attacks. Wolf Brew Games heard the critics loud and clear because 5 months later it rereleased Slain with the additional “Back From Hell” added to the title. This new version of the game is nothing short of a masterpiece!

One of the most beautiful 2D games I have ever laid eyes on, Slain: BFH is every horror video-game fan’s wet dream. Gothic architecture, blood splashed mountainsides, and majestic woods fill every inch of the TV screen. Each enemy is a blast to slaughter and boss fights never fail to impress. The game controls like a dream and at first you’ll probably find it a bit easy, but you better master those controls quickly because this game is anything but a cakewalk.

With great graphics comes great music! Former Celtic Frost bassist Curt Victor Bryan lends his talents and the end result is stellar. My head was banging to the music and my brain was telling me to keep pushing so I could be treated to a new metal tune on the next level. Retro fans should not let this game pass them by. What are you waiting for? Honour the Great Horned Metal God! The King of Fighters XIV may not have made the best impression on fans of the series when it was first revealed in late 2015, but SNK’s latest entry in the long-running fighting game series sure made its mark when it finally released last August. Coming out swinging with a burgeoning 50-character roster, The King of Fighters XIV proved to be one of the series’ most ambitious entries to date. From the opening round to the tournament’s conclusion, each bout simply gushed with that charm and personality SNK was known for in the glory days of the Neo Geo, proving that the one-time arcade juggernaut has what it takes to go blow for blow with the genre’s heavyweights. Hell, it even put Street Fighter V to shame. That’s no small achievement for a studio who for years has been perceived as a shadow of their former self. As if that’s not enough, Atlus and SNK are adding a pretty sizable visual overhaul to the title this month, which is sure to breathe new life into the game.

Here’s hoping that The King of Fighters XIV is just the start of good things to come from SNK and Atlus’ partnership. Just the thought of seeing The Last Blade or Garou: Mark of the Wolves revived with as much care as KoF is enough to excite even the most jaded SNK fans. 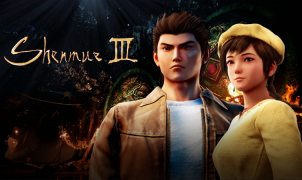 Welcome back to the world of Shenmue To the die-hard fans who’ve patiently waited these past 18 years, I won’t keep you waiting a moment longer — Shenmue III…