Halo Wars 2 Is Getting A Physical Release on PC

Upcoming RTS Halo Wars 2 will be getting a limited physical release on PC thanks to THQ Nordic. Who said physical media is dead? Certainly not the folks at THQ Nordic. Today the publisher confirmed they are partnering with Microsoft Studios and 343 Industries to bring Halo Wars 2 for Windows 10 to retail stores worldwide with a physical release. To further sweeten the pot, those who purchases of the retail release of Halo Wars 2 on Windows 10 will also receive digital access to the game on the Xbox One.

The game’s physical retail Ultimate Edition will include 4-day early access to the core game, a Season Pass and Halo Wars: Definitive Edition, an enhanced version of the original Halo Wars that is playable on both Windows 10 and Xbox One as an Xbox Play Anywhere title.

So, will you be picking up this retail release of Halo Wars 2? Let us know in the comments. 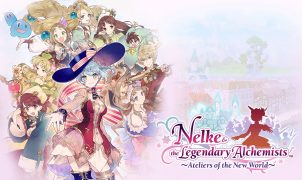 A Happy Anniversary Indeed     I’ve been saying for a while now (if only to myself) that the Atelier series needs to re-invent itself a bit. I’m not sure exactly…