The day the Dooming died After iD software released the source code to the original Doom at the end of 1997, many programmers took it upon themselves to have a stab at fixing the game and porting it to a plethora of different platforms. One of the earliest efforts was the simply-named ZDoom, itself based off earlier efforts named ATBDoom and NTDOOM.

Now, after nearly two decades of coding, the developer “randi” has hung up the towel. In a forum posting, he tersely announced that no further updates will appear, and urged users to follow alternative forks. The ZDoom site itself and its forums will continue to remain active, allowing users to continue posting new levels, tutorials, wiki entries, and even content on other source ports.

ZDoom is a very popular source port because it extends the Doom engine’s capabilities and allows for extensive scripting, producing new and varied gaming experiences. It’s also the base for many other source ports and projects, including the runaway success that is Brutal Doom and the popular multiplayer port Zandronum. For a while, it was the de facto standard in playing Doom on Windows, macOS and Linux, and is a considerably superior experience to playing the game on DOSBox. It also fully supports other official Doom engine games, such as Heretic, Hexen, Strife, as well as semi-official releases like Chex Quest and HacX, and even unofficial projects such as FreeDoom.

A couple of the recommended forks include GZDoom and QZDoom. If you’re any sort of retro and Doom fan, you owe it to yourself to check them out and have a stab at the extensive list of mods. 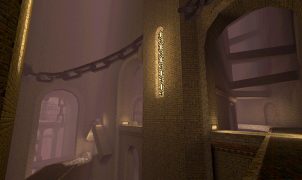