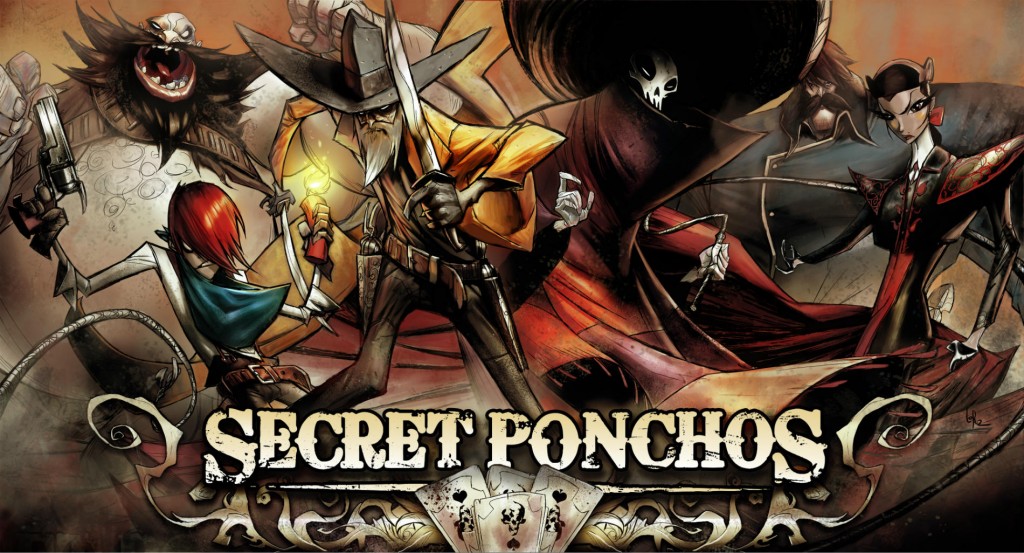 Most of the westerns on this list are lone rangers – games where you go it alone against the badasses and bandidos of the west. But Secret Panchos is quintessentially a team-based experience where working with your posse is essential. Featuring cartoonish characters and a MOBA-like system of skills and cooldowns, Secret Ponchos gives you a diverse range of playstyles to master.

Secret Ponchos is one of the most intricate, skill-focused MOBAs I’ve ever played. While many luminaries of the genre will let you auto-attack without too much precision required, Secret Ponchos requires you to aim every bullet very precisely. Skills need to be used just as judiciously, as many of them can backfire horribly. Portly Mini-gunner Gordo can toss a molotov cocktail, which is great for cutting off escape routs and controlling areas Kid Red can drop a stick of lit dynamite into someone’s pocket, making them a ticking timebomb, but if he doesn’t skedaddle away fast enough, the explosion can end up killing him as well. The Killer’s knife throw can stick in an opponent’s shoulder, making them waste precious seconds pulling it out, but it’s just as easy to accidentally knife a teammate in the back during a tense shootout.

Alas, it could be argued that the steep learning curve and unapologetically competitive focus can daunt newer players. This is why Secret Ponchos has now become something of a forgotten gem, with its servers sometimes feeling as desolate and devoid of people as Death Valley at the peak of summer. If you’ve got yer own gang of 4-6 outlaws to play it with though, Secret Ponchos is well worth picking up. 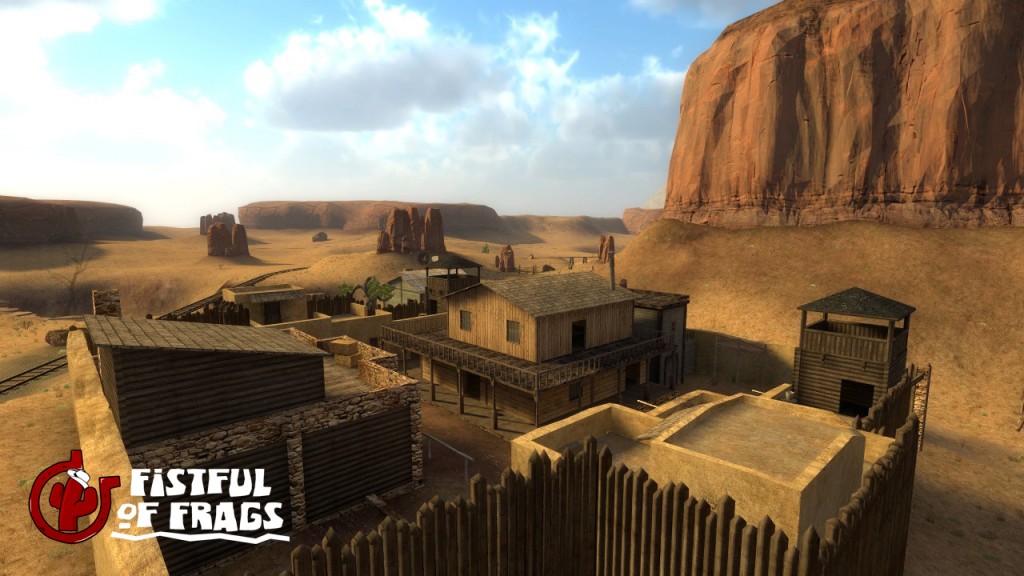 When you think of Half Life 2, you’ll immediately associate it with crowbar-wielding mute protagonists, not whiskey-drinking ornery cowpokes. Yet, Fistful of Frags is a Half-Life 2 mod that manages to be pretty much the most popular of the multiplayer westerns going today. Fistful of Frags distinguishes itself from other FPS titles by having a slower, more considered pace with a greater focus on precision than twitch reactions. With your old-fashioned six-shooters, your aiming reticule gets bigger than the side of a barn door when you’re moving around and shooting, meaning you’ll have to stay still for a moment to get an accurate shot. Every showdown with another player feels much more tense and drawn-out than in your standard FPS, and you’ll have to line up your shots carefully, especially with the realistic reload times where you’re slotting bullets individually into your six-shooter’s chambers.

Of course, accurate shootin’ is made even more tricky by the fact you can only heal damage by chugging whiskey – which makes your cognition as slippery as a greased-up snake. The sprawling stages are full of chaotic elements, featuring trains that trundle around the map (giving you a platform to shoot from or running you over), mine shaft elevators and treasure chests containing the post powerful guns. Every permutation of multiplayer mode is available. Free-for-alls, last man standing matches, team deathmatches with two to four teams – even a mode where you can earn dollars for a gunning down players on a killing streak, and buy yourself an iron for each hand.

Fistful of Frags is a wild, yet oddly realistic and effortlessly fun pick-up-and-play multiplayer shoote. Best of all, you can pick it up for free on Steam. Give it a go! 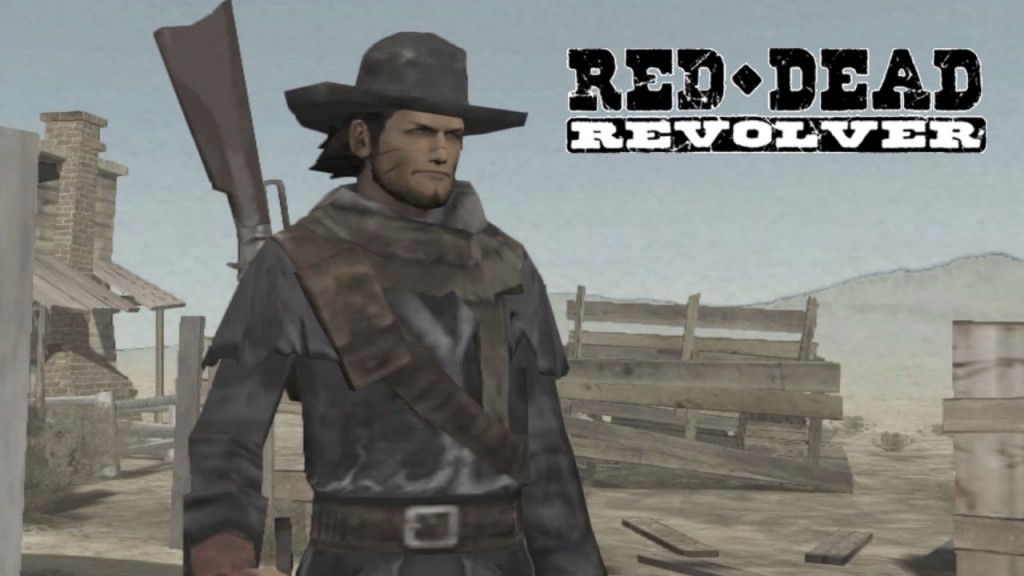 Before there was Red Dead Redemption, this rather exceptional series started off with Red Dead Revolver. In a shockingly original turn for a Western, it’s a revenge story! RDR’s titular hero, Red, is orphaned by a group of renegade soliders looking to rob his father of his share of a lucrative gold claim. The intro is particularly brilliant at setting up this story of slow-burning, long-awaited revenge, featuring a teenaged Red shooting the arm off of one of his parent’s killers with a burning gun that permanently burns an inscription into his palm. Many years later this inscription proves to be key in finding his father’s traitorous mining partner, who built a fortune on selling out Red’s father (which he’s used to hire a horde of goons for you to shoot through) and splitting his vast gold claim with an insane Mexican General.

You won’t just play as Red either. You’ll also take on a few levels as different characters like Annie Stoakes, a hard-living frontier woman fighting to save her family’s ranch (what is it with stubborn ranch-owners in westerns?). Red’s Native American cousin Shadow Wolf lets you try your hand at the bow and arrow, taking down opponents at a more methodical pace. Then there’s Jack Swift, the effortlessly charming English trick shot artist (who is somehow not the villian in spite of his nationality). Not only does the diverse cast give more gameplay variety and narrative flavour to the proceedings (which it needs since Red is a bit of a laconic sort of chap), their various story threads all twist into an incredibly satisfying tangle as Red’s epic revenge quest reaches its climax.

Red Dead Revolver went for a much more straightforward Spaghetti Western presentation than its sequel Redemption. With a flickering film-grain filter over the camera and a mix old Western themes in the score (including compositions from such greats as Ennio Morricone) Red Dead Revolver is much more self-consciously styled in the classic mold of Sergio Leonne’s Dollars Trilogy westerns than Redemption is. It’s also a completely linear set of missions, not givin’ a tinker’s damn for them open world shenanigans. It’s this less ambitious approach that might explain why Red Dead Revolver is well regarded, but not held in quite the same esteem as its sequel. 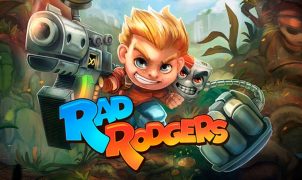