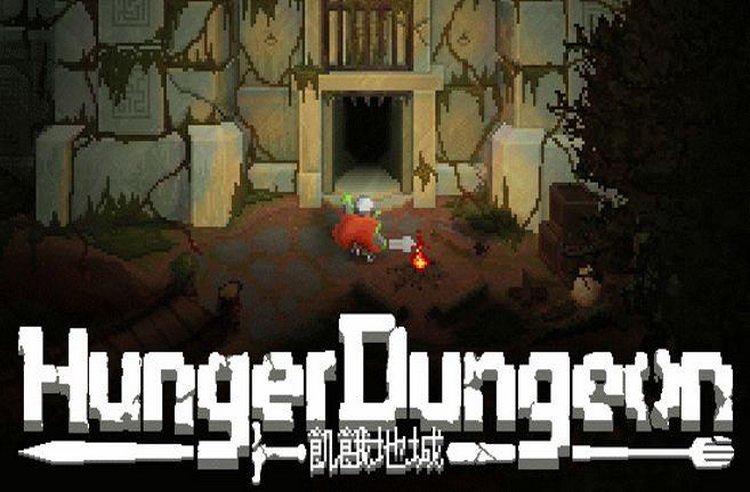 I’m usually not one for games that heavily emphasize online PvP. League of Legends, Starcraft, Call of Duty… those games are all great, and I totally respect people for getting as into them as they do, but I’ve always favored platformers and turn-based RPGs, or games that emphasizes cooperative play – but hey, I’m not completely immune to the charms of competition either. As much as I like getting alone with everyone, sometimes it’s fun to jump into a game for with a bunch of strangers (and/or friends!) for a while and beat the heck out of each other while frantically scrambling to claim first place. Seeing as how I have not the time, money, or patience to dedicate a large portion of my life to any of those big multiplayer contenders however, I stick to the smaller PvP games when I get that competitive urge – and it just so happened that Hunger Dungeon presented me with such an opportunity! Ready to see what Hunger Dungeon has on the menu? Yeah, of course you are!

Hunger Dungeon is what is known as a MOBA – short for Multiplayer Online Battle Arena – which basically means that all you’ll be doing during your time with the game is participating in in an endless loop of fighting other players, leveling up, and using your newly-acquired level-up bonuses to… wait for it… fight other players! Hunger Dungeon follows typical MOBA fashion in that it doesn’t really offer much in the way of lore – the story is basically “you’re trapped in a dungeon and only one person can escape, now fight each other!” – but that’s okay. People don’t generally pick up MOBAs with the same story expectations that they would have for an RPG, anyway. Hunger Dungeon knows why you’re really there – to fight, and become very hungry because of it! 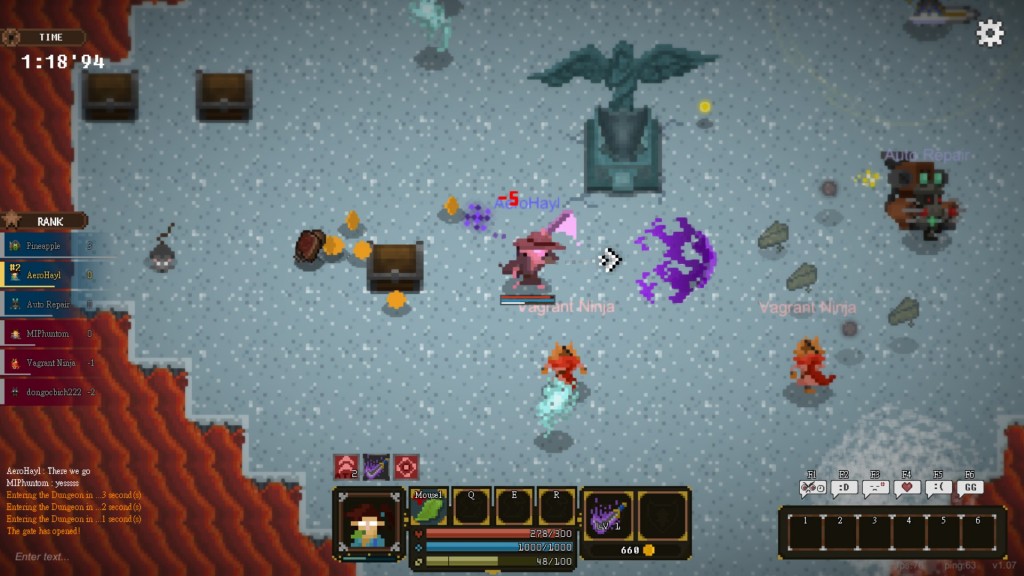 The beginning of each of Hunger Dungeon’s games starts with players picking their character from a pool of 12, each with their own distinct skillset (my favorite was the Samurai), and entering a small hub. From there, players can purchase items, equipment, and spells from the merchant residing there – with more items becoming available as the player levels up. After properly suiting up, it’s go-time!

The goal of each round is simple (and probably not that surprising) – kill other players, and avoid being killed. Hunger Dungeon is essentially a round-based PvP hack-and-slash, albeit a slightly more sophisticated one, with plyers able to utilize basic and character-specific special attacks via the mouse and spells with the keyboard. While the “mouse” attacks are inherent from the get-go, spells much be purchased before each round (players start out with a set amount of gold, and earn more based on their performance between rounds), and aren’t carried over from game to game. The total number of purchasable spells and items in the game pretty decent but unfortunately, due to the need to level up, your choices are going to be pretty limited until you finally start building up that sweet, sweet EXP. That’s always kind of been a thing with PvP games though, so you can’t really blame Hunger Dungeon for following the trend. At least, I can’t. 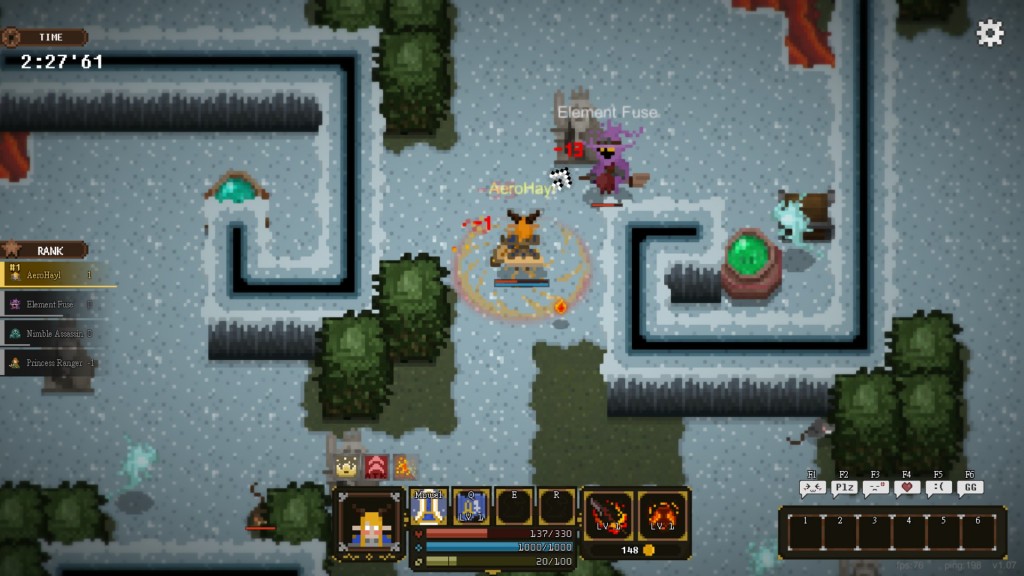 After you and your friends (or your group of strangers) have spent a few rounds killing one another, you’ll eventually enter the final round. Unlike the previous rounds, which used a point system based on each player’s kill/death ratio, the final round works a bit differently. Remember that whole “only one person can escape the dungeon” thing that I talked about? Yeah, that plays a part here. Essentially, all rounds before the final one are nothing more than ways of building up money in order to power up your character for the final showdown. During the final round, players will be able to collect shards to power up the massive rune circle in the middle of the arena. The more shards you have, the more smoothly the powering-up process will go. When the rune circle has been fully powered-up, you win! Simple! Of course, it’s a bit more difficult than it sounds. When attempting to activate the rune circle, your character must survive, and stay within the circle, throughout the process. Failure to do either will reset the meter back to 0. In order to prevent someone from tanking the process, characters are also marginally weaker – it sounds kind of hectic, and it is, but it actually works pretty well. This mode, known as Massacre Mode, also comes in free-for-all and team varieties. Both are fun (so long as you actually strategize with your teammates in the latter) and help to stop things from getting too stale, which is good because things do get a bit repetitive – even for a MOBA.

Additionally, Hunger Dungeon has a third mode – Dragon Mode. Dragon Mode ditchestraditional MOBA-ness and instead places players on a team against a CPU-controlled dragon boss monster. These dragons are incredibly tough and require a lot of teamwork and experience before they can actually be taken down, but I found myself becoming quite fond of Dragon Mode despite how hard of a time I ultimately had with it. It doesn’t necessarily have the same pull that the Massacre modes have, but Dragon Mode did a good job shaking things up nonetheless. 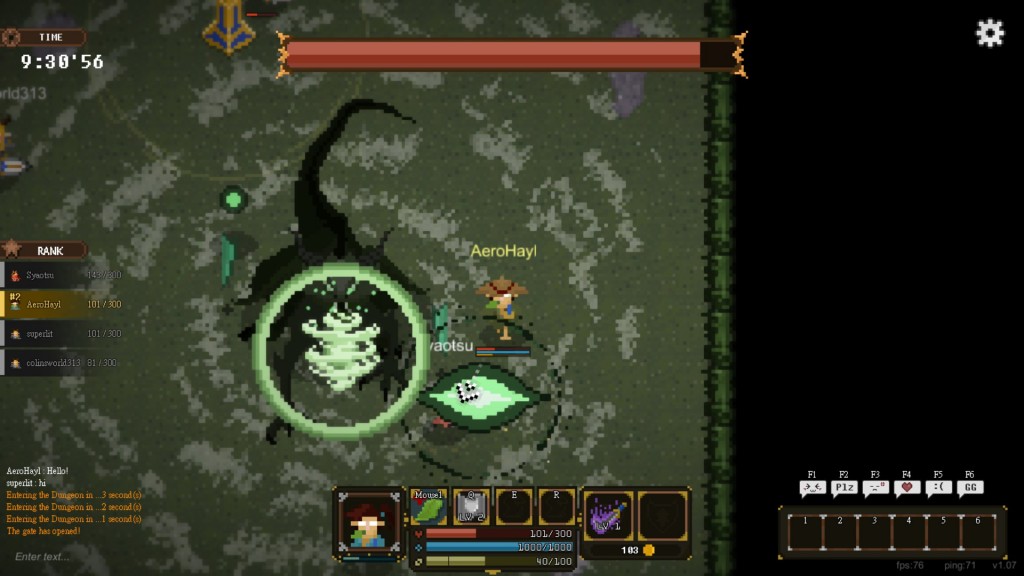 So that actually covers most of the gameplay, but I’m sure that plenty of you out there are asking yourselves “why the heck is this game called Hunger Dungeon?” Well, that’s because of the hunger mechanic. Duh. …Right! I should probably explain to you what that is. That’s kind of an important part. Okay, so. Along with HP and MP (or “Mana”, as it is called I this game) meter, there is a third meter – a hunger meter! Hunger begins at about half (it’s supposed to be 50 I think, but always seems to drop down to 49 before the game begins for some reason), and slowly decreases over time – I mean to be fair, I’d probably build up an appetite were I fighting for my life too. You can fill up your hunger meter by eating assorted meat, cheeses, and bread strewn about the dungeon. It’s totally safe, really.

The hungrier your character is, the weaker they become. Hungry characters end up suffering from lack of HP and Mana recovery, and can eventually even become worse at fighting. Alternatively, characters who are full will find themselves with boosted recovery rates, and are harder to knock around. At first glance it feels like the whole hunger meter thing is just a mechanic that was shoehorned in just to make Hunger Dungeon stand out from the crowd, and honestly it might be, but it’s one that works well more often than not. The fact that you need to find food mid-battle creates an extra element of strategy that, while annoying at times, isn’t really too bad overall. 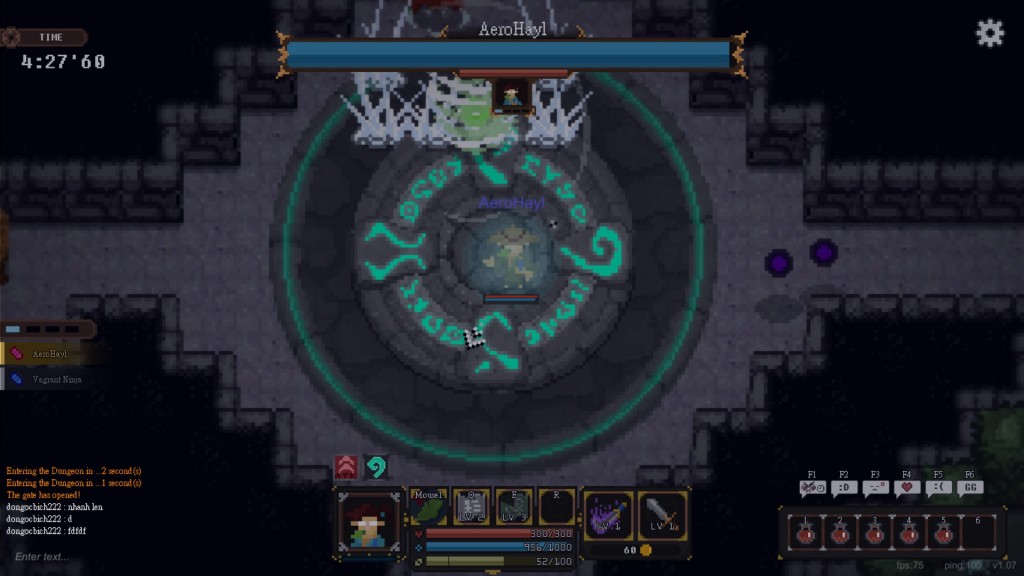 There’s something else about Hunger Dungeon that I feel is worth mentioning; the fact that it is a Freemium game. Freemium games, for those who do no not know, Freemium games are games that are initially free to download and/or play, but cost real-life money in order to unlock additional content. The Freemium model isn’t my favorite but I don’t particularly have anything against it, especially if it’s pulled off well – and really, Hunger Dungeon doesn’t do a bad job. The “Free” version of the game allows players to choose from 3 randomly-chosen heroes out of the pool of 12 to play as, and switches things up every few days. Additional characters can be purchased with a special in-game currency earned through Ranked Matches and Dragon Mode. Funny enough that store isn’t actually open yet, but Hunger Dungeon is still in its infancy stage – you can’t get mad at them for that right now.

Alternatively, players can upgrade to the Premium version of the game – called the “Deluxe Edition” for a one-time payment of $11.99 (USD). The Deluxe Edition permanently unlocks all 12 characters, gives them each an additional costume (most of which are actually quite nice), and even throws in the soundtrack. The fact Hunger Dungeon adheres to the “try before you buy” method is something that I can applaud them for – it’s always nice to know what you’re getting into before you spend any money. 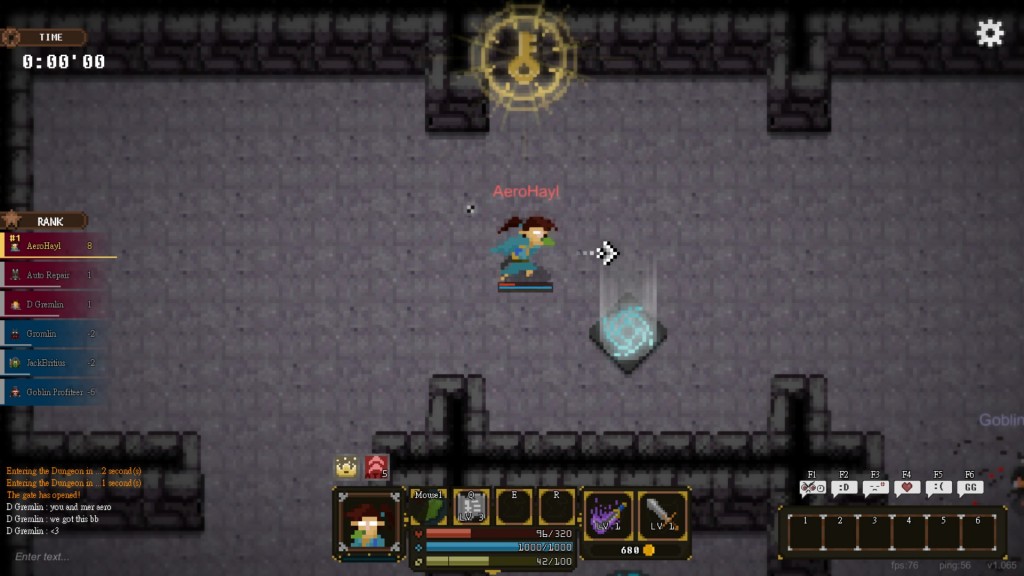 Hunger Dungeon’s visuals are your standard, retro-inspired pixelated graphics. Objectively speaking they’re pretty good, and I especially like the character’s nice range of movements. Still, there isn’t anything spectacular going on. It’s all good. A solid “good” – nothing more, nothing less.

Things are pretty much the same in Hunger Dungeon’s audio department, too. While nothing was offensive or bad in the slightest, the sound effects and OST left me thinking that more could have perhaps done just a little bit more. I did like the theme that played during the last round, though; that one’s definitely worth a listen to.

Full Disclosure: This review was based on a PC copy of  Hunger Dungeon provided to HeyPoorPlayer by the developer.