By now many of us have heard of the update, ironically named the “Foundation Update”, for No Man’s Sky. To the credit of studio developer “Hello Games” it certainly does help alter the face of the historic flub the game turned out to be, but it seems there’s a major question that isn’t being asked here: are any of these things changes that we, the players, wanted? I’m advocating that they are not, and throughout this growing word count I’m going to tell you why I feel that these updates are an even broader slap in the face than the original launch of the game.

Let’s think back for a moment to day one of No Man’s Sky. On day one we each woke up on our respective planets, figured out the inventory system in spite of Hello Games deliberate intent that myself and countless others wouldn’t, and within an hour (more or less) began flying around the solar system. Now, if you’re like me, those first few days, maybe even the first week, were amazing. As someone who is a space geek I thrilled at the idea of being an intergalactic David Attenborough, exploring planets’ flora and fauna and knowing that I was the first to have done as much. However, as the weeks turned into the first month of gameplay I began to realize something: this game wasn’t changing. I hadn’t found an Atlas Pass yet, I was “discovering” the same creatures on different planets, and I was coming to realize that the planets themselves didn’t vary that much over the course of time either. Each day I started the game I left it feeling bitter, disheartened, and cheated. Eventually I found myself skipping full star systems without even batting an eye. Come a full month of trudging through the wastes of a galaxy whose name I never cared to discover or create, I sold my copy of No Man’s Sky for one-third of the price I initially bought it for and never looked back. This update piqued my interest, and for a second I hoped to actually regret my decision of selling No Man’s Sky, but quickly I realized that I had made no mistake at all. Why, you ask?

For starters, these new game modes that are introduced in this new Foundation Update aren’t even necessary. Creative mode is great for games like Minecraft and titles that are similar in heart to No Man’s Sky but smaller in execution, such as Subnautica. However, in a game where there is literally a universe to explore, I find it hard to rationalize why a Creative Mode is really needed. According to the update notes, Creative Mode simply allows for players to build bases and forego the dangers of the game. Now, I never actually played Minecraft, but in Subnautica, Creative Mode lent itself as a way by which you didn’t have to worry about starvation, dehydration, asphyxiation/drowning, or being ripped apart by any beasties that may be lurking in the dark ocean depths of your alien world. Note that I said/wrote “world” there, and not worlds. Base-building is a great feature for a game in which you are more or less restricted to one locale for the duration of a game, but No Man’s Sky doesn’t do that. Let’s be honest, exploration is one of the few attributes of the game that we did get upon launch, and now one of these latest additions offers to minimize the attraction of that as well? This is a step backwards in every way and I am somewhat astounded that this passed with the Hello Games staff.

As for Survival Mode, I suppose there’s something to be said about catering toward the crowd of masochistic gamers that were awakened during the renaissance of titles such as Dark Souls. This game mode being incorporated doesn’t bother me, but it seems like this should have been low priority given the amount of actual issues present in the game.

Freighters is another portion of this update that I feel, once again, spits in the face of players. When Sean Murray was telling one of his multiple stories of what No Man’s Sky was going to feature, at one point shipbuilding was one of them (not base-building). Instead of incorporating this into the game, we got the freighters addon, which seems to add only a fraction of what a custom ship might offer. I rant further on this and how it may or may not apply to space combat within the game on episode 77 of the Hey, Poor Podcast which you can catch here. I’ll summarize my point only by stating that with combat already being as broken as it was with a single, semi maneuverable ship, how might one get away from raiders and sentries while driving a freighter? No doubt a player may have already cracked this code by now, but nevertheless it seems that this addon wouldn’t have been necessary if we’d just gotten what we were originally promised with the custom ship building!

That’s not to say of course that all of these updates are bad or unwanted. I’m a big fan of the camp making add on, though I feel something the likes of a message system might be unnecessary given how unlikely you are to run into anyone. For what it’s worth, the average member of the gaming community is more likely to troll another player than warn or help them, and since I’m already not likely playing No Man’s Sky for the multiplayer elements (because we don’t have any!) I don’t see why that in particular was a choice the team went for in this update.

The way point add on that is included in the camp update is also a phenomenal touch. I hated that so many times I would have to leave a pool of valuable resources behind to sell them only to forget where they were right after and render myself unable to go back for more. Hopefully there’s a reasonable limit as to how many you can drop on a planet at any given time.

In the end though, liking two or so attributes to a hundred plus new addons in this update isn’t saying much. What I would have preferred was a longer wait on this update and for Hello Games to take a more in depth look at their procedural generation issues. As stated above, my first week or so of playing No Man’s Sky was amazing, but eventually it came down to encountering the same 15-20 animals over the course of 40 or so painfully similar planets. On that note, I also would have loved the planet variations that they promised. Where was my Dune planet? My Pandora planet from Avatar? I want the features I was promised, not fatty spam.

Until that update comes, Hello Games, you will not win me back.

The ultimate question here is what is the future of both No Man’s Sky and Hello Games? Whether they can save their major title release or not, will that save their future and their ability to make more games? Right now if Hello Games announced another title, I’d stake a year’s salary on the likelihood that almost no one would be eager to purchase it – at least not as a day one release. Even if they can fix No Man’s Sky, which they don’t seem certain on how to do at the moment, their reputation might be limping as a side effect of the bullet they shot in their foot back in August.

For more information as to what the Foundation Update included, go here. The update is available on both PlayStation 4 and PC. 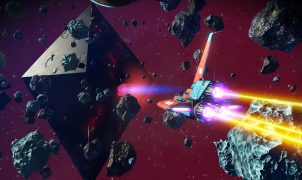