May Odin give you knowledge on your path! As many people know, my first ever computer was that quintessentially British masterpiece the Sinclair ZX Spectrum, a quirky 8-bit machine that anyone outside of Europe just doesn’t understand. But what a lot of people don’t know are the reasons why I went with the Spectrum (my dad wanted to buy an Atari XE) and Viking Raiders is probably the biggest of them all. I first played this game round a friend’s house and it had me enthralled from the first moment. At this point I was still pretty new to video games anyway, so the basic graphics and sound did nothing to put me off. One of the key elements was that it was multiplayer, meaning a group of us could all play at the same time, solving arguments over who got the next go in our limited time after school. Viking Raiders allowed up to four people to take the role of a Norse warlord in an effort to defeat your enemies and plunder all their resources. So turn-based strategy it is then! Viking Raiders isn’t exactly what you would call advanced. Everything is played on a single screen and all instructions are entered via a few basic key presses. You start with an allotted sum of money, which can be topped up by collecting treasure littered around the landscape, and the ability to build three types of weapon. At your disposal are troops (cheapest at 1 coin), catapults (4 coins) and boats (8 coins). The latter of which can only be built if you are next to water and serve no other purpose other than being used to transport troops. All of these can be moved up to nine spaces at a time (you get to choose) in the same direction. If something gets in their way then they will just stop. When it’s your turn you get to move every single one of your assets or skip it if you’re already happy with the positioning. With catapults you get the chance to both move them and fire them. Again, this is also set by you entering a number from one to nine. Catapults can destroy other Viking raiders, boats and enemy catapults too. If one of your warriors encounters another from a rival clan they will do battle to the death. This probably sounds more exciting than it actually is as it’s purely random who wins! All pretty standard so far I guess, but this is where some of the unique quirks in Viking Raiders come in. Firstly there are the boats, now as I already said these can be used to transport your troops along the fjords (up to three at a time) but if you are clever they can also be used as bridges! All you have to do is line them up in a row across the channels and walk along them – a neat trick if there ever was one. The best and funniest part of the game though, comes in the form of the flagons of ale that litter your surroundings. These are randomly placed at the start of each level, and if one of your Viking raiders runs into them, he becomes drunk! Once under the influence you totally lose control of the sozzled Norseman. His actions become totally random as he staggers round the battlefield and fights anyone who gets in his way! While annoying, this is pretty hilarious. Providing he doesn’t get killed, he comes back under your control when the inebriation wears off. Winning in Viking Raiders is pretty simple; you either defeat all the opposition troops or capture their castle and be the last warrior remaining! In a multiplayer game this can actually take hours when things get really tactical. As I already outlined, Viking Raiders is certainly nothing special at all when it comes to graphics and sound. Both are simple at best, but do the job well enough to convey the Nordic chaos going on. The controls aren’t the best either, with all of the players hunched around the same keyboard. But Viking Raiders is just amazingly addictive and strangely compulsive, even when playing on your own. Little touches like the randomly generated landscapes and ability to rename the players also helps, and adds a nice little bit of personalisation. While we had the multiplayer madness of Worms in the nineties, back in the eighties we had Viking Raiders. One of the best reasons to own a ZX Spectrum and one of my greatest childhood memories too. It’s also worth noting that an excellent Android remake is available in the Google Play store under the title Viking Invaders, so you no longer need a Speccy to enjoy the delights of drunken, dark age combat! 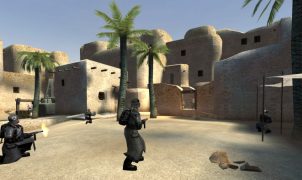