Play a song for me.

I’ve always wanted to play the piano. It’s been a passion of mine since as far as I could remember. Unfortunately, I never owned one, attended lessons, or otherwise tried to learn how. That didn’t stop me from getting excited when I saw the building manager at the office installing one in the lobby. Hell, that means I got even more excited. This was finally the chance I’ve been looking for. I still wouldn’t be taking lessons or even attempting to learn the first thing about playing, but I figured one out of three was enough to get started.

I figured the best way to get started was to pay a visit after business hours. That way, I could play to my heart’s content without being told to leave. Also, I wouldn’t be seen when I loaded the piano onto the roof of my ’98 hatchback. I typically operate best under the cover of darkness. Unfortunately, pianos are very heavy, motion detectors absolutely work at night, and the police are very persuasive. So no, I don’t own a piano (anymore). But to make up for it, I did play a demo for an upcoming game called “The Piano.” So at least that.

“The Piano” is a greenlit upcoming indie mystery game by Mistaken Vision. Players take on the role of the failed pianist, John Barnerway, as he wanders the streets of 1940’s Paris. The story begins with the deaths of John’s more successful and famous brothers. This has seemingly thrown the protagonist into a mental breakdown as he does his best to discern what really happenes as well as what’s actually real.

The core gameplay for “The Piano” is best described as story-based adventure. Players take to the streets of Paris in search of items, memories, and diary pages. Each one helps unlock the mystery behind the game in its own way. Memories and diary pages give insight into John’s past as well as the pasts of those close to him. The diary pages are mere pieces of paper littering the ground. The memories, though, come in the form of floating typewriters. Upon activating them, a voiceover of the relevant memory streams through John’s head. My memories also take the form of floating type writers.

On the other hands, items work together in order to move John forward in the present, such as using a ticket to gain entrance to the music hall. Most items need to be combined together before they’re used. The demo only gives players a handful of items to use, but the mechanic is extremely simple. You have an inventory. You can click on the different items. If they can be combined, then they probably should be. There’s nothing else to it. Is my ticket larger than a vase?

The real power behind the game, though, is the atmosphere. The Parisian streets form a dark labyrinth that make it easy to get lost. The walls are covered in grafiti that spells out phrases like, “Your Brothers Are Dead.” The atmosphere benefits from the fact that John spends the entirety of the demo completely isolated from any real person. The closest thing he gets to human contact is ghostly shapes of people who may or may not actually be there.

John may not be entirely alone, though. “The Piano” also features the demons in John’s mind that seem to wander the streets with him. In my experiences with the preview, I encountered two different kinds. One was a mass of red mist that hung over different areas. They didn’t move or anything, but when you first see them, the game tells you to move slowly. Fast movements seem to “scare them away.” The other was a creepy ghost who kept trying to grab John. To fight against it, players have to complete a few different quick-time events. If done successfully, the creature fades to nothing. If not, then John passes out.

If John passes out, then you lose. Different events and figures in the game cause John to get mentally stressed out. The more he gets stressed, the closer he is to passing out. To prevent that, “The Piano” gives players syringes of medicine to calm him down. Oddly enough, the streets of Paris are absolutely littered with the things. While that’s probably not the best choice for a public street, it was nice to stock up. However, by the end, I probably had enough leftover to fill a bathtub with it. Then again, it is still in beta.

I like beta releases, because it gives players a chance to comment on a game before it’s finished. Based on my experiences, I have a several thoughts on where “The Piano” can go from here. First, the game is often far too dark. The noir-style, dark streets of Paris does work nicely, but there were several times I simply couldn’t see what was going on or where I was going. For example, take a look at the first screenshot I took of the core game. I intended for it to be a character shot, and this was the brightest I could get it in the game. Raise your hand if you can see him.

It’s not a huge issue, but it did bother me throughout my playthrough. Aside from that, most of the design is polished and solid. The United engine works well in “The Piano.” John is fully responsive. Picking up items and memories is seamless. The winding streets are confusing, but that choice works for the mental journey the game represents. I found the voice acting lacking, but that’s understandable for an indie title. Voice work is expensive as hell.

I did find a few glitches that were large enough to break the flow of the game. The first and smallest was that there was a memory the game confused with a save spot. Instead of activating the memory, I was instead asked if I wanted to save my game. Aside from that, I found a peculiar spot that was far too easly to clip past. It was so easy, that I first thought I was supposed to go that way. It wasn’t until I clipped through the buildings around me that I realized I had screwed up. I am one with Paris now.

The last time was when I got stuck on the scenery. I was between a rock and a slight step up, and John just couldn’t bring himself to hop up a bit. I struggled just enough to realize I wasn’t getting out of it before resetting the whole thing. The good news was that I wasn’t far from a save point before that happened. However, the next player might not be so lucky. Regardless, this is what beta releases are for, so hopefully this kind of thing won’t be so common in the final version. My final complaint with the game involves a mostly unused and pointless mechanic. At the intro sequence of the game, players are allowed to pick dialog options. Being a huge fan of Telltale’s episodic games, I was excited to see them. Unfortunately, they only make a brief appearance and vanish for the rest of the game. Also, it’s clear from the start that the different dialog choices change nothing about the game at all. I don’t even think there are different responses for each choice. I’m not saying the “The Piano” should redesign the entire game around dialog choices. To be honest, it would probably just be better off without them at all. They don’t add anything of substance to the game, and they only had me expecting to use them later in the game. Typical dialog would work just fine. I liked my experience with “The Piano” by Mistaken Vision. The atmosphere works wonders on the mysterious and emotional story. I was intrigued enough in what happened to explore the streets over and over again in case I missed any diary pages or memories. I feel the developer did a great job giving players just enough information to string them along.

Of course, there are issues with the game as it is now, but that’s to be expected. There wouldn’t be beta versions of games if they came out perfect from the start. Considering typical fixes and changes to the game mechanics, I think it’s safe to say that “The Piano” can be a solid game for mystery fans. If you’re interested in all in this title, be sure to check it out on Steam Greenlight. 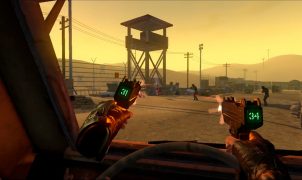