6 Gamecube Games We Want To See On The Nintendo Switch

GameCube games could well be coming to the Switch via Virtual Console, here are six that we think deserve a second chance. Earlier this week it was revealed that the Nintendo’s upcoming handheld-hybrid console Switch may be getting Gamecube Virtual Console support. Obviously, this pretty big news for fans of Nintendo’s quirky purple platform. Seeing as we’re pretty partial to the GameCube ourselves, we’ve taken it upon ourselves to put together this list of six titles we think would be must-buys if the Switch does indeed resurrect Nintendo’s beloved lunchbox-shaped console on the VC.

Please bear in mind that this list is discounting a number of first-party games that we’d consider shoe-ins, such as Smash Bros. Melee, Mario Kart: Double Dash,and your usual stable of Mario and Zelda titles. It’s not that we don’t love them, but they’re pretty much a given. We’d rather focus – at least for the most part – on titles that may or may not make it to the GameCube Virtual Console.

While many would argue that Silicon Knights’ Metal Gear Solid reboot paled in comparison to the PSOne original, I have to admit I have a soft sport for the game in all of its over-the-top, missile-punching spectacle.

Besides, it’s not often we see Kojima himself outgunned when it comes to weirdness, and The Twin Snakes’ penchant for nearly slapstick stealth espionage action is a sight to behold. Thankfully, that’s not all the game has for it, as Silicon Knights did implement a lot of the features found in Metal Gear Solid 2: Sons of LIberty to make it a more streamlined and playable experience, such as the ability to aim in the first-person, along with improved enemy for the Genome Soldiers who occupy the besieged Shadow Moses facility. Considering just how clunky the original game feels nearly two decades since its release, I’d say that’s a good thing.

Metal Gear Solid: The Twin Snakes may be little more than an oddity in the long-running series, but it’s one that absolutely deserves to be enjoyed by a wider audience. That said, the Switch would be a great place for armchair commandos who missed this off-kilter sneaking mission to start. Before Metroid Prime released in 2002 I, like many fans of the series, purchased the title with no small degree of trepidation. After all, developer Retro Studios was formed in partnership with Acclaim’s Iguana Entertainment Jeff Spangenberg, a studio whose releases were wildly inconsistent in terms of quality. That fact, along with the new first-person perspective, made me more than a little wary of what I was getting myself into.

Thankfully, Retro defied all of my expectations, delivering a masterful blend of first-person exploration and time-tested Metroid mechanics that went together like peanut butter and bacon (trust me, you’ll like it). Tallon IV’s aline setting was nothing short of mesmerizing, and the new perspective pulled players into the role of bounty hunter Samus Aran like never before. The first time you take control of the morph ball in Metroid Prime is an unforgettable experience, and battles with signature enemies, like the fearsome space pirate Ridley, hold up even to this day as some of the most spectacular the series has ever seen.

While Metroid Prime saw a re-release as part of the Metroid Prime Trilogy on the Wii, the game has ballooned in value, becoming one of the harder to find titles for Nintendo’s waggle-tastic console. That said, seeing the game roll out onto the GameCube Virtual Console would be a great chance for players to enjoy this timeless classic on the cheap. Over a decade before the Year of Luigi was a twinkle in our sidelined Mario Bro’s mustache-framed eyes, Luigi’s Mansion was scaring the daylights out of millions of GameCube early adopters. The game deviated about as far as you can from the vibrant platforming romp the Super Mario Bros. franchise was known for, delivering an eerie tour through a haunted house just teeming with spirits in need of a good vacuuming.

Despite the comical aesthetic, Luigi’s Mansion surprisingly packed some quality scares beneath its whimsical veneer. This was largely due to the game’s unpredictable jump scares and superb sound and visual effects that brought the eerie mansion to life.

While Luigi’s Mansion: Dark Moon spit-shined and refined the mechanics of the original game to near perfection, I still feel that the numerous locations that made up the experience diluted the formula a bit by making you care less about each locale than you did the original’s sprawling estate.

That said, it’s hard to imagine Nintendo wouldn’t bring Luigi’s Mansion to the GameCube virtual console. Then again, the Kyoto-based company is an unpredictable one, so you never know what they’ll do. In any case, bustin’ makes us feel good. And we’d jump at another opportunity to exercise our inner ghost hunters again with this timeless classic. 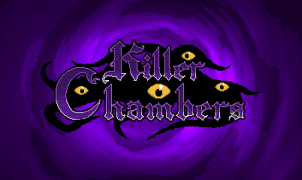