Double Dragon on the Master System is lumpier than Abobo, but still a rib-smashing good time. In 1987, Technos Japan’s Double Dragon ruled the arcades, single-handedly kicking off the beat ‘em up craze that led to such beloved titles as Final Fight, Streets of Rage, Golden Axe, and countless other brawlers that dominated the arcades in the late ‘80s and early ‘90s. Considering the game’s massive success, it’s not surprising the quarter muncher found its way to a number of home consoles in the years following its coin-op debut, with the most popular ports being the NES version, which released in 1987, and the Game Boy Advance reboot, which found its way to Nintendo’s mighty handheld nearly two decades later. However, while it doesn’t get much as much recognition as its brethren, Sega’s 8-bit powerhouse got its own port of this iconic brawler, and it wasn’t half bad.

Double Dragon on the Sega Master System essentially mirrors the NES version of the game, as brothers Billy and Jimmy Lee take on the nefarious Black Warriors gang to rescue Billy’s kidnapped girlfriend, Marion from their clutches. Their fight takes the Brothers Lee through seedy alleyways, industrial factories, a deadly forest, and a trap-filled temple as they crack the skulls of a variety of thugs with their martial arts prowess. It’s a trope-laden story, and one that’s been done time and time since in the advent of the beat ‘em up genre, but it gets the job done. After all, you won’t care what your motivations are when you’re tossing gaming’s favorite Herculean hoodlum, Abobo to his death into a rushing waterfall. Sega has never been above cheeky product placement.

Then again, you’ll likely be taking that plunge quite a bit yourself sadly, as the Master System version of Double Dragon features some of the squishiest controls around. During my time with the game, I fell victim to far too many deaths due to the unresponsive circular d-pad causing me to waltz off of a bridge to the waters below or stumble into a pit of spikes, turning my player into a succulent Lee kebab. Beat ‘em ups demand precision, and this general unresponsiveness can really throw a wet towel on what would otherwise be an entertaining slug-fest.

While the unresponsive controls are certainly a headache that will take some getting used to for those who cut their teeth on the arcade or NES versions of Double Dragon, that’s not the only thing that’s been changed in this port. Enemy damage ratios have been cranked up significantly, and a single jump kick from your standard hoodlum will cost you a whole fifth of your health bar. This, combined with enemies who barely recoil from your hits and counter your punches instantly, really makes the game feel unbalanced when compared to its contemporaries.

Still, Double Dragon on the Master System does get some things right. The lack of a 2-player cooperative mode was a big letdown for anyone who purchased the game on the NES. Thankfully, the Master System port features full support for co-op fisticuffs, and the game is much more playable with a friend, as your comrade can help thin out the heard, making the melees much more manageable. In addition to the inclusion of the arcade’s 2-player mode, the Master System version of Double Dragon also features some improved visuals over its NES counterpart. Technos did a great job of giving the sprites some improved depth through the use of shading, and they look much more authentic when compared to the arcade game, though they’re still a far cry in terms of quality from the coin-op original. Still, Double Dragon looks damn good in 8-bits on Sega’s trusty console, egregious sprite flicker aside. While not arcade perfect, Double Dragon on the Master System sports some fairly detailed sprites with plenty of shading.

When it comes to arcade games, few titles have as memorable of a soundtrack as Double Dragon. Unfortunately, Sega’s Master System wasn’t the most formidable when it came to the audio department. While many of the memorable tracks from the arcade game have returned, they really pale in comparison to the NES version’s arrangements. The sound effects also suffer in this regard, with hits coming across as tinny and lacking a satisfying impact.

Double Dragon on the Master System isn’t perfect. In fact, the game features more lumps than Abobo’s misshapen noggin after taking a 50 gallon drum to the kisser. Still, despite its imperfections, this iteration of Technos’ iconic brawler is still scratches that street fighting itch. Squishy controls and a wealth of balancing issues be damned, Double Dragon on the Master System remains a solid co-op beat ‘em up that’s worth seeing through to the end despite its many imperfections. 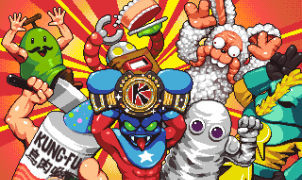