This is your last chance, free us or die! 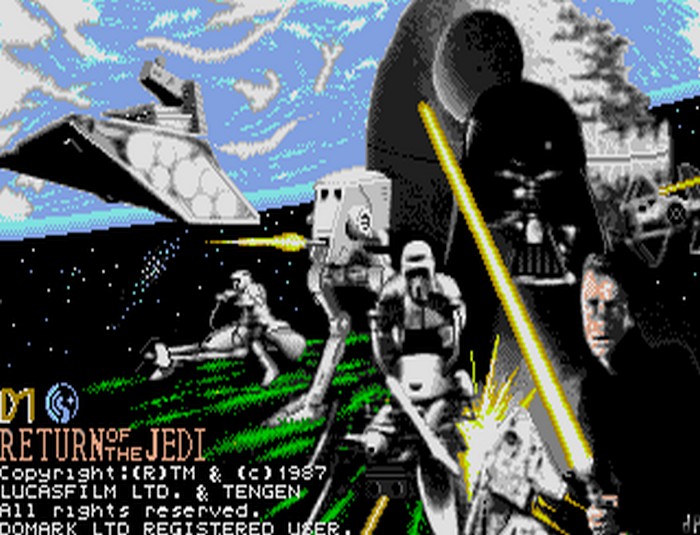 Although Return Of The Jedi was the third Star Wars movie, from the original trilogy that is, it was actually the second arcade game based on the films. Developed in-house at Atari Games and officially approved by Lucasfilm themselves, it uses the same System II hardware as titles such as Paperboy, Super Sprint and A.P.B. It also shares a similar handlebar style controller to Paperboy too, this time it’s made to look more like the controls of a snow speeder though. This is not where the similarity ends though, as Return of the Jedi features an isometric viewpoint and is also fits into the driving game genre better than any other. Unlike Paperboy, and much more like the first Star Wars game, Return of the Jedi was available in both stand-up and sit-down versions. The latter is much more sought after and features even more gorgeous artwork too. Of course this Atari ST port by Domark can’t begin to replicate the custom controls or the cabinet but it does a pretty good job of everything else. 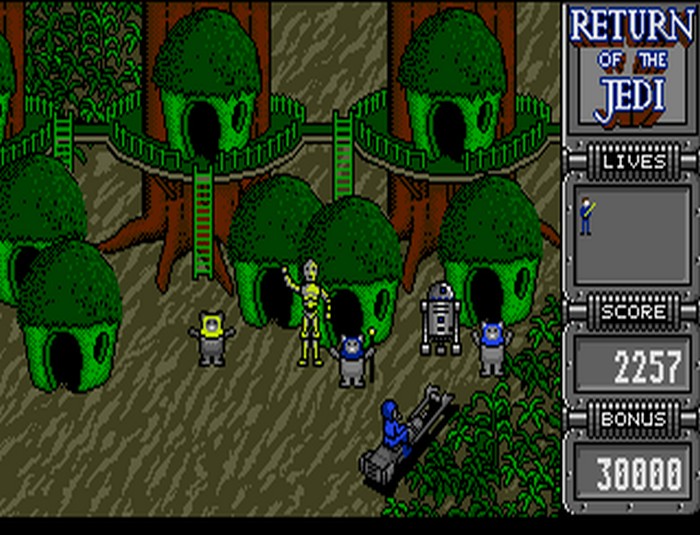 Another feature that Return of the Jedi has in common with the original Star Wars title is that it has three very distinct stages, all based on famous scenes from the movie, and three difficulty levels too. In the first of these you take the role of Princess Leia as you race through the forests of Endor on a speeder bike trying avoid the trees and reach the Ewok village. You are being chased all the way by enemy Storm Troopers who can be either shot down or lured into Ewok traps. Be careful though as you can fall fate of these traps too. The second phase gets even more hairy (excuse the pun!) when you become Chewbacca. He has captured an Imperial AT-ST Walker and must shoot at the enemy while avoiding the trees and traps. In the last part of Return of the Jedi you get to pilot the Millennium Falcon as you enter the Death Star on a course to destroy the reactor within. Here you must battle Tie Fighters and watch out for laser turrets. Once the reactor is hit you must escape before the explosion engulfs you. After this the game repeats with a higher difficulty, again this is much like the original game. 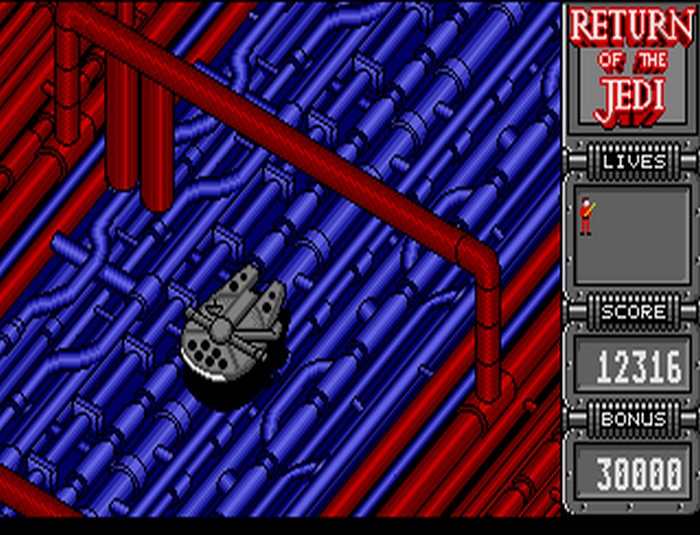 When it comes to the ST version of Return of the Jedi there are very little differences. The graphics look remarkably close to the arcade original. The only real change is the addition of a status panel on the right hand side, this simply means that the ST version retains the original screen ratio. The audio in this version is a bit of mixed bag though; while the odd bits of music and digitised speech are really nice the sound effects are extremely weedy indeed. The gameplay has been adapted perfectly to work with a joystick and so there are no real complaints in the control department. The biggest problem with Return of the Jedi remains that that game itself is just not that great. I will never forget how disappointed I was with this back in the day after playing Atari’s original Star Wars game, which is rightly remembered as an all-time classic. While there is nothing inherently bad about Return of the Jedi, it’s just not that exciting and just feels pretty weak when put next to its vector-based counterparts.