The Amazing Spider-Man Vs. The Kingpin Although the title has been expanded, this game is actually a CD update of the cartridge game known simply as Spider-Man. You might think “aww what a con, I thought this was a different game” but put that disappointment on hold because Spidey Vs. Kingpin is a significant improvement on the cart version.

For those who might not have played the original this is side-scrolling fighting game with platform and adventure elements where the player controls Spidey in his battle against his mortal foes. These super villains include Doctor Octopus, Sandman, The Lizard, Hobgoblin, Vulture, Mysterio, Electro and Venom. The primary object of the game though is to obtain the keys needed to disarm a nuclear bomb that the Kingpin has not only framed Spider-Man for stealing but plans to detonate within 24 hours. Just to add insult injury, as you are playing through the game Mary Jane Watson is also kidnapped by Venom!

With the extra levels, new music, voice acting and numerous secrets Mega CD Spider-Man shows exactly how a CD update should be done. The added features vastly increase the enjoyability of what was already an excellent game and make this a must have title for Sega’s much maligned add-on. Originally released for the PlayStation 2 with PSP, Wii, Windows and Nintendo DS versions following, Sega’s game was the first one to be based upon the Ironman movie franchise. Starring Robert Downey Jr. as Tony Stark himself, the first movie came to our screens in 2008.

This game is particularly interesting in that despite being based on the first Ironman movie it only loosely follows the story. With this title Sega tried to please movie goers and comic book fans alike as they combined elements from both to create an interesting 3D action game with emphasis heavily on fighting. You must guide Ironman through 12 different missions, each with their own boss, and this includes villains that do not appear on the movie such as Whiplash and Titanium Man. Cut scenes tell the story between missions with the real voices of Ironman actors including both Robert Downey Jr. and Terrence Howard being used. The upgradable weapons on offer include missiles, micro-grenades, repulsive shots, EMP blasts, a flame thrower and the all-powerful Unibeam too.

Ironman was criticised for being a little clunky and awkward on release with poor camera angles and repetitive gameplay not helping matters. Sega did release an updated version of the game 2 years later for the Xbox 360 and PS3 that fixed some of these issues. Another game based on Marvel’s movie universe, Super Solider actually follows the original film Captain America: The First Avenger, despite the change in title. It was published for the Nintendo Wii, Xbox 360 and PS3 in 2011.

The whole game is based around infiltrating the top-secret HYDRA base inside Red Skull’s castle. Cap himself parachutes down from a plane and must avoid the enemy fire and then try to find a way in. Once inside the fortress you need to not only hunt down Red Skull, Arnim Zola and their HYDRA henchman but also detonate a series of bombs in order to destroy the base once and for all. While emphasis is heavily on the fighting there are also elements of puzzle solving, platforming and adventuring that will often have you going round in circles trying to find out where you have to go next. Despite some minor frustrations such as this the fighting mechanics work really well and it represents the source material really well.

Captain America has starred in more than a few video games over the years but Super Soldier is definitely one of the best ones. I personally enjoyed the unique controls and more faithful comic book stylings of the Wii version. 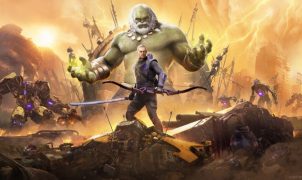 Everybody Was Kung-Fu Fighting   While hugely popular in the 1990s with classics like Streets of Rage, Final Fight, and Double Dragon dominating the home console and arcade scenes,…