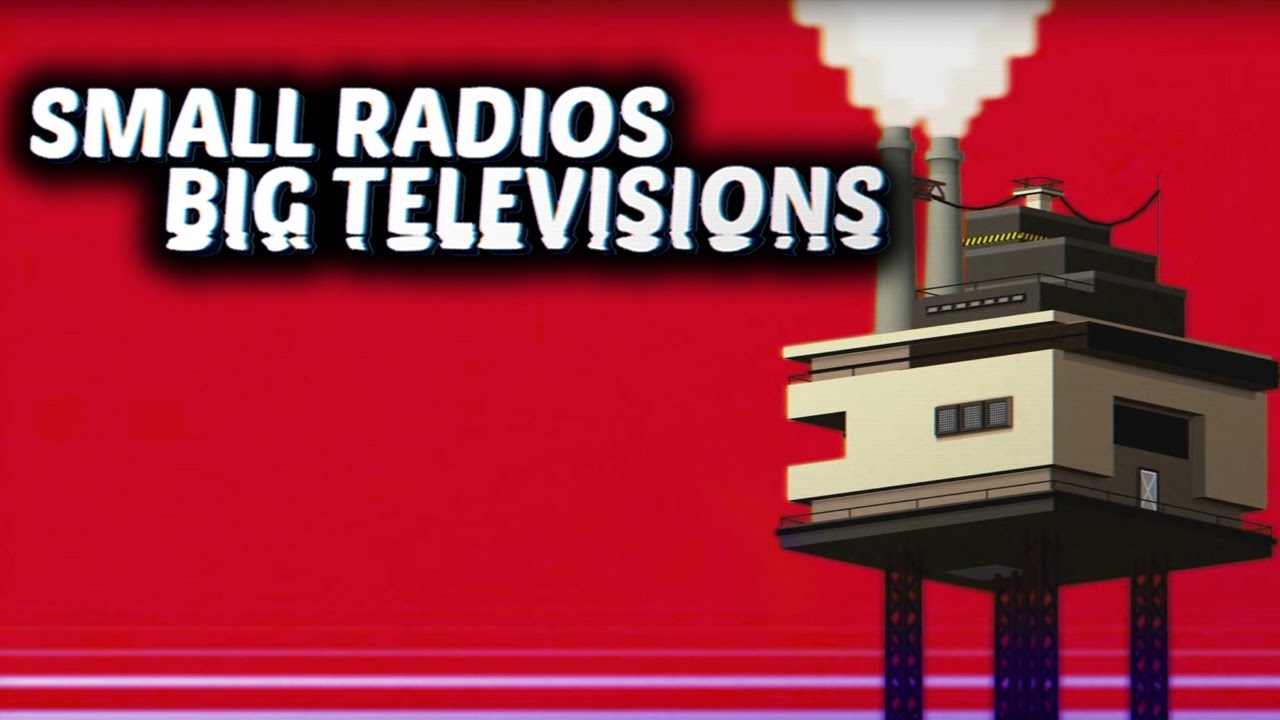 I’ve played an awful lot of unique video games over the years, but Small Radios Big Televisions may be the most surreal one to date. Imagine, if you will, a game that tosses players into a visual depiction of Aphex Twin’s ambient works as you explore pulsing virtual soundscapes and lifeless factories. Developer Fire Face and publisher Adult Swim Games have crafted a bizarre and undeniably fascinating pilgrimage of sight and sound here, but the lack of a real hook keeps the final product from coalescing into the transcendental journey it could have been.

Each of Small Radios Big Televisions’ five stages has you controlling a cursor as you explore a different factory. While most corridors allow you to progress virtually unhindered, occasionally you’ll have to solve logic puzzles to progress. These challenges range from shining light on weeds that are blocking doors to destroy them, inserting cogs into machinery to power doors and other gadgets, and manipulating valves in certain patterns to redirect the flow of water and clear a path. None of these puzzles will leave you stumped for long, Instead, they serve to keep you further immersed in the nearly hypnotic music and appealing, intentionally lo-fi visuals. 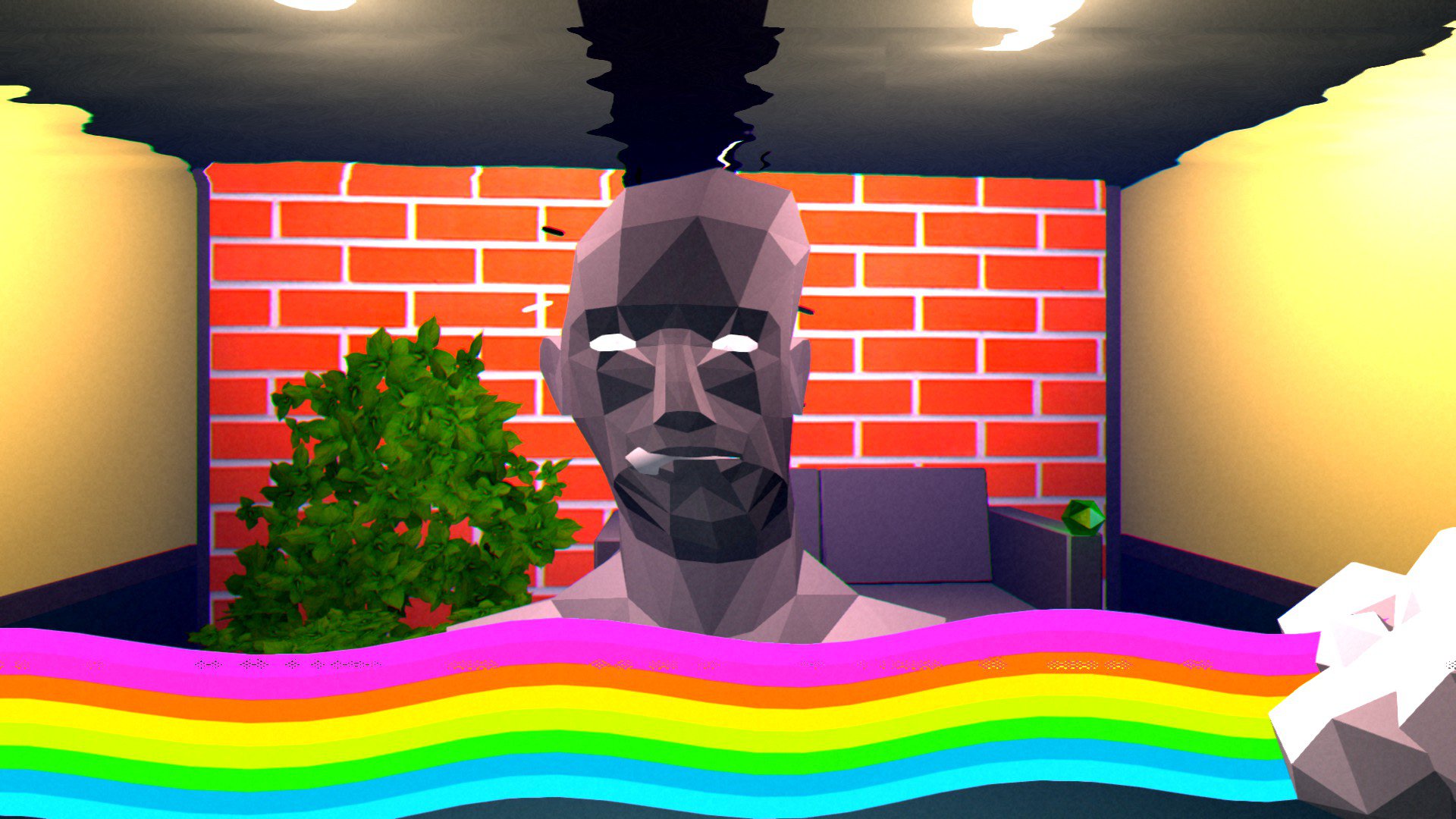 The cassette worlds could have been Small Radios Big Televisions’ most interesting feature. Unfortunately, they’re too shallow to impact the experience in a compelling way.

Things get interesting when you come across cassette tapes, though. These tapes are scattered across each stage, and unlocking their secrets is the key to completing each factory. After slapping a cassette into your trusty TD-525 tape deck, you’ll be instantly transported into another world – usually a scenic outdoor setting that stands in stark contrast to the sterile factories you’ll explore. It’s here that you’ll uncover emeralds which are used to open locked doors in the real world. Sadly, this is where what could have been Small Radios Big Televisions’ most interesting mechanic falls completely flat. While lovely to look at and accompanied by even more deliciously ambient compositions, these psychedelic soundscapes are almost entirely superficial. Rather than giving you a meaningful new area to explore, the emeralds you seek are sitting in plain sight. Occasionally you’ll need to make use of magnets in the real world to distort the tape and find these precious gems, but that’s really the full extent of things, making what could have been the game’s biggest hook feel like the equivalent of a fancy Windows screensaver.

In between stages you’ll be presented with tidbits of story told through white noise and subtitles. What’s here is lean, but I have to admit I was intrigued by the premise of a story being told without the help of any organic life to move the narrative along. The plot offers a window into a ruined world where escapism through analog media is the future of mankind. It’s novel and foreboding, but I wish we were given more to go off of. The fact that the ending does very little to underscore whether or not our player has made the right choice only serves to muddy the waters rather than provide any real answers as to what happened to the rest of the world. 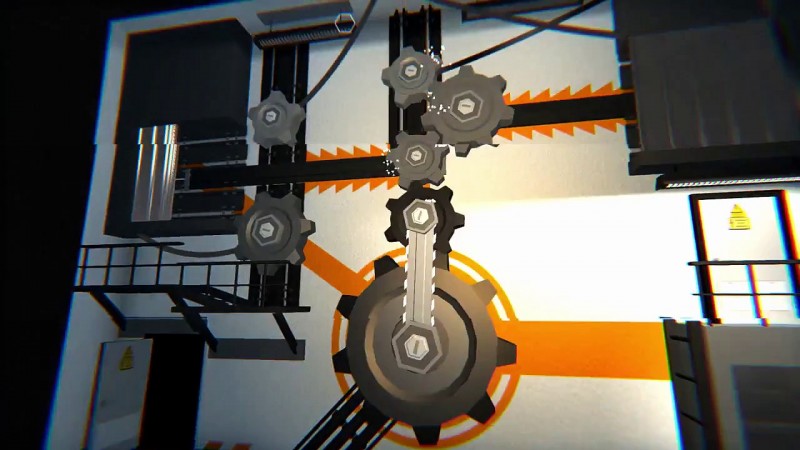 When not venturing into the game’s surreal soundscapes, you’ll find yourself kicking things into high gear with logic puzzles.

It’s a shame too, because the strange world of existential emptiness and analog media that Fire Face weaves really appeals to me. In terms of presentation, the retro futurist trappings are both breathtaking and simplistic. Panning around the facade of each factory offers striking imagery that could be considered modern art. And the harsh, polygonal dream worlds the cassettes transport you to are both haunting and lovely. As for the soundtrack, each of the 23 tunes that accompany the on-screen exploration will leave anyone with an appreciation for the likes of chillwave artists like Com Truise and Tycho quite pleased with its selection of haunting, minimalist sounds.

The controls in Small Radios Big Televisions are a bit of a mixed bag as well. While essentially a point-and-click title, the cursor you control constantly drifts to the center of the screen. This can occasionally cause issues when you’re attempting to manage your inventory at the bottom of the screen, as there were numerous instances where I went to use an emerald only to have the cursor drift to a door or switch that was near what I wanted to interact with. This senseless drifting also makes manipulating machinery in the environment needlessly cumbersome as your cursor gravitates away from what you’re trying to interact with. It’d be easier to forgive this nuisance if it served any discernible purpose, but it doesn’t. It simply makes tasks that should be a breeze become tedious wrestling matches with your controller. Looking back, I can’t help but  feel that the game would have been better suited as a PlayStation VR title, as looking around and interacting with the objects in the environment could have been so much more immersive and manageable using Sony’s headset instead of the finicky analog controls. That said, here’s hoping the game gets patched with PSVR support in the future, as I’d gladly dive back in to experience the title in what would seem to be its ideal medium.

Small Radios Big Televisions isn’t without its share of flaws. However, I can’t deny that I found myself enamored with the two-hour title’s fantastic atmosphere and top notch soundtrack. If you’re a sucker for the retro-inspired visuals and 80’s-steeped aesthetics of Hotline Miami or similarly nostalgic titles, you’ll likely at least enjoy the game on the surface level. Of course, excellent presentation alone doesn’t make a great game, and without a real hook to pull players into the experience, Small Radios Big Televisions feels like a teaser for something that could have been much more than the sum of its parts. Still, at just $12, it’s hard to argue with what you’re getting here. If you’re looking for a sedate puzzler with a style all its own, you may like what the game has to offer.

Full Disclosure: This review was based on a PlayStation 4 review copy of  Small Radios Big Televisions provided by the publisher.

Burn, Baby, Burn Do you hate spiders? Not like dislike spiders, but loathe them with the white [...]