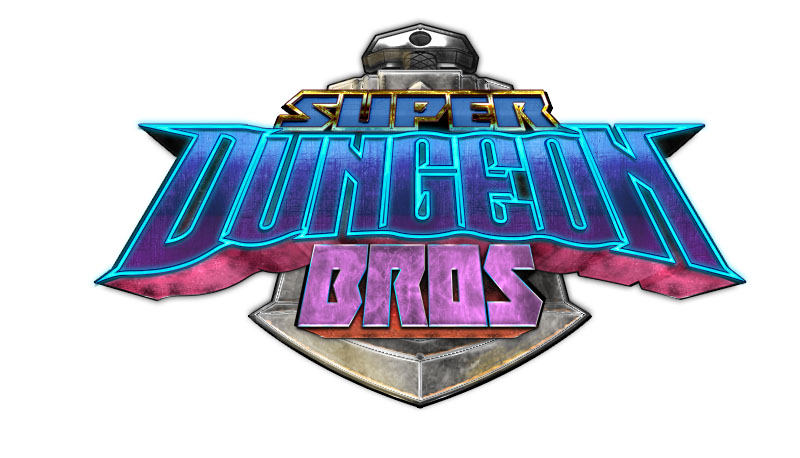 Four bros, multiple dungeons, online co-op, and countless hours of play time. Sounds appealing, right? This is what Super Dungeon Bros promises: procedurally generated dungeons with fast paced gameplay and rock and roll themes to get your heart pumping as you play! Did it deliver, however? Not in the least. This top down dungeon crawler looks colorful and fun, but that’s where the impression stops. Even the toted “rock” theme for its musicality performs under par, leading to a great deal of disappointment.

Here’s the thing, with four characters there should be a variety of gameplay methods, but there isn’t. The four characters: Lars, Axl, Ozzie, and Freddie vary in colors, but that’s about it. Their weapon load outs, their attacks, nothing about them is different at the beginning of the game. Their voices hardly seem to vary whenever they speak in-game. Truthfully, that’s not too big of a deal by itself, but where the game really starts to fall apart is level progression. Super Dungeon Bros promised over 32 million different dungeon combinations, and while I did see variations within each dungeon there were some pretty centralized similarities between the majority of them. (I’m beginning to become wary of any game that promises procedural generation anymore, it’s starting to become the elusive white stag of video games.) I also only ever played Cryptheim as it was the only dungeon available. 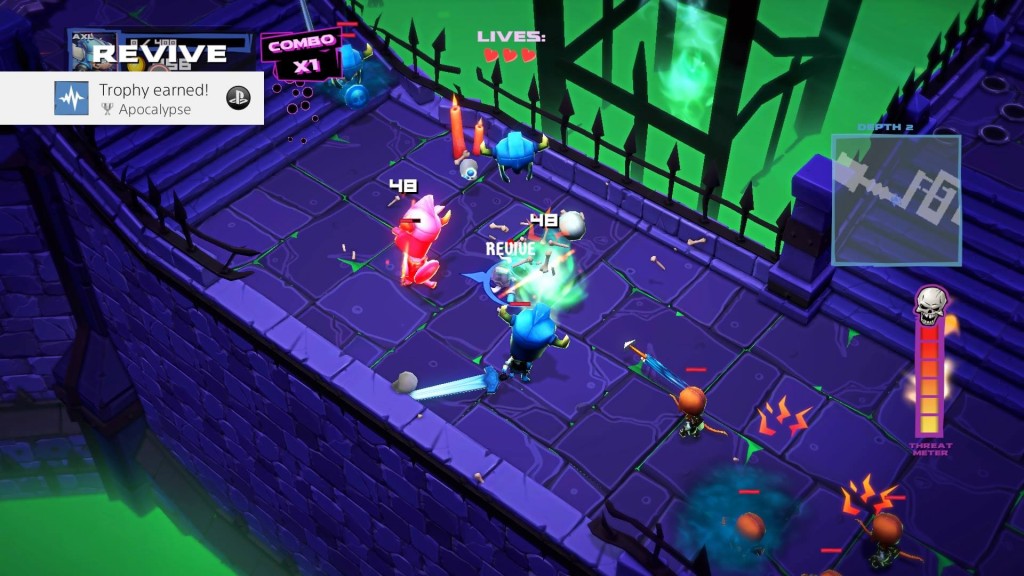 My journey with Super Dungeon Bros began with the tutorial, and unfortunately due to having to walk away for a few hours mid play through I had to close it out. This eradicated any opportunity for me to come back and access the tutorial later, essentially rendering me unable to learn how to play the game outside of hitting the ground running. Consequentially, that’s what I ended up doing and as a result this flavored a lot of my opinion of the game early on. Now for what it’s worth, there’s not a lot to learn with this game. The player has three main attacks: heavy, light, and ultimate. How you use them is up to you, but be careful. Once you use your ultimate attacks (you have two), you don’t get it back unless you happen to run into a charging station where you can purchase it back for about 75 gold (you can also regain health and replenish lives for a larger sum). Gold is obtained by killing enemies and damaging portions of the environment. Enemies increase in difficulty throughout the dungeons, and increase in quantity per dungeon “depth”. That’s about the extent of it.

You can probably guess where I’m going with this: Super Dungeon Bros is repetitive. The best it seems to offer by way of varied gameplay is to simply throw more enemies at you, inundating your screen and making it utterly impossible to keep track of everything happening around you. The baddies you fight telegraph their intent to hit, but the response time between their signal and your ability to move (providing you’re not blocked in by a horde of enemies) is almost impossible to time, and the more enemies on screen, the more convoluted the telegraphs get. There were more than plenty of times where I was so overwhelmed that I spent the entirety of a level segment jumping around and letting the enemies all just kill each other, which sounds nice, but it takes a long time to pull off, and you’re still not guaranteed a victory at the end of it as the next platform will more or less throw the same technique at you. 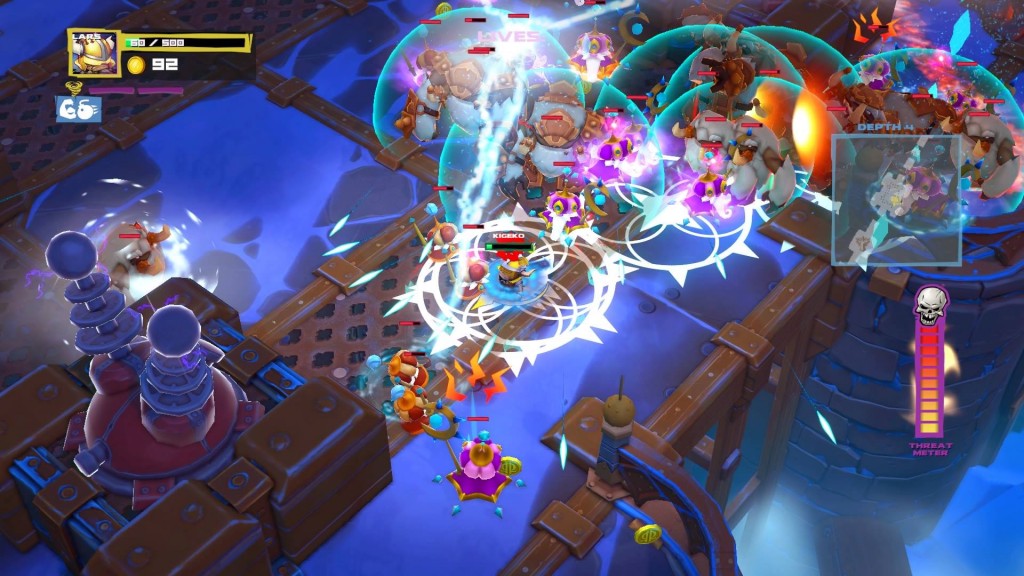 Weapons can be upgraded and new ones purchased, but the starting sword seems to be the best and most effective in terms of speed and area of effect. The crossbow in the game is a joke, and the hammer, while powerful, is predictably slow. A wand is also unlocked after collecting the appropriate amount of gems, but I didn’t bother. Over time I got the impression that constant repetitive play was necessary in order to unlock better weapons and maybe then progress would be possible. This, in my opinion, is not very good game design. It’s made worse that I was mostly only playing single player. The co-op in this game is better, but not by much, and that’s if you can even find enough players to connect. I had only one successful time in the lobby and that game didn’t last very long. The perk of co-op however is that different portions of maps are made accessible, much like Little Big Planet’s co-op, via a mechanic called the “Bro Throw” where you can pick up your teammates, aim, and throw them to reach otherwise unreachable areas.

For what it’s worth, Super Dungeon Bros is kind of fun, if only for a little while. The experience would probably increase slightly if you had four friends to play with instead of strangers. I could totally see this being the type of game you play with a few friends while downing a beer or two because it’s not very intense, not story driven, and it isn’t a time investment either. A player can easily knock out a few dungeon levels in under twenty minutes.

One of the nicer things about Super Dungeon Bros is that you can also tweak your difficulty settings by going up to each of the four giant braziers and setting one (or all) of them as functioning if you like. There will be a certain amount of points docked from your overall score if you do this (it will tell you in the text prior to making your selection) but if you find that you are more likely to run this game solo than with a team, this might make Super Dungeon Bros more endurable. The nerf wasn’t very balanced however. I can say that I noticed a change almost right away, and the game became almost boring immediately. 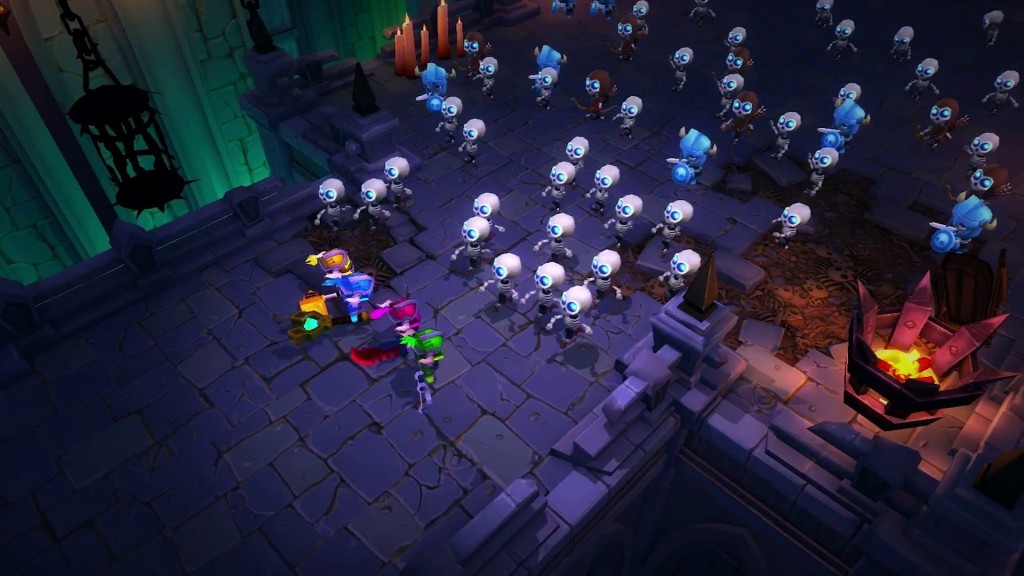 Overall, this was a really good try and an almost success at a casual dungeon crawl. With the tweaking for solo campaigns and the massive enemy onslaughts already administered for the four party member games, Super Dungeon Bros works on paper. Weapon and armor upgrades as well as DLC music packs help to add some flavor, but it’s so difficult to get the former and you have to pay for the latter. Not to mention that, as mentioned before, a game that claims it is “rock and roll” oriented really should have a better soundtrack without requiring you pay extra. I never really noticed the background music of Super Dungeon Bros; my dog however barked incessantly whenever it played, so that might tell you something.

I cannot in good conscience recommend SDB, especially not for the price tag of $19.99 for both console and PC version. If you’re a dungeon crawler connoisseur and have three friends that are too, this game might be worth it, but you’re better off playing a game that already has the formula down.

Full disclosure: This review is based on a PlayStation 4 review copy of Super Dungeon Bros given to HeyPoorPlayer by the publisher. 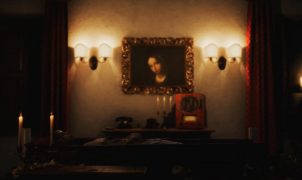 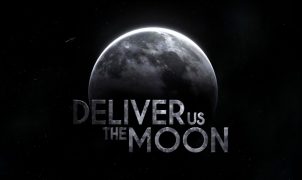