Time to join the jet set! One of the chief criticisms people level at Sega when they talk about the Mega CD is why they never released any of their classic Super Scaler coin-ops for the add-on. With its hardware scaling chip, the Mega CD seemed like it was designed for games like Outrun, After Burner, Space Harrier and Galaxy Force. But while it didn’t get any of those big hitters, it did get one of the later games to utilise this iconic arcade hardware: After Burner III. Confusingly, this game is actually the sequel to G-LOC and was also known as Strike Fighter in the arcades, so isn’t really an After Burner game at all! I can only guess that when it came to the Mega CD release, Sega felt that the After Burner name was far more likely to gain traction than G-LOC. As G-LOC was often lauded as follow up to After Burner by Sega anyway it’s probably of little consequence. The core gameplay is pretty similar to both the previous games: After Burner and G-LOC. It basically involves flying around in US Air Force fighter jet shooting at stuff. The missions involve destroying both ground-based and flying enemies, usually revolving between the two. They also see you switching between both a cockpit and third person view, each with their own advantages. In cockpit mode it’s actually easier to shoot down enemies thanks to the crosshair but you can’t see enemies sneaking up behind you. In the traditional third person view you can see more of the screen around you, but aiming is not as precise, so each viewpoint has its own advantage. When in third person view you do have a small scanner in the bottom right corner that is supposed to help you with avoiding enemies, but it isn’t really that much help. You also have the use of the trademark after burners, which you can use to speed away from enemy ambushes. This is only available when the meter is fully charged though and it takes some time to replenish after use – so use it wisely! The machine gun should be used to take down as many enemies as you possibly can because your homing missiles are limited and will only work when you have a “lock-on”. The last feature of your aircraft in After Burner III is the ability to perform barrel rolls, these are particularly useful for avoiding enemy fire and can be used as many times as you like. Afterburner III makes good use of the Mega CD hardware with its fast, smooth and well-drawn graphics. The way the camera zooms in and out of the first and third person viewpoints is a particularly impressive feature. As it’s on CD, there is also your usual FMV intro sequence. More than a special mention must go to the utterly brilliant soundtrack though. Combining both original tunes and remixes of classic After Burner tracks, it’s worth listening to on its own and easily pushes the score of the game up an extra notch. It seems that this game has been given a lot of stick over the years and it received some very low scores in the magazines of the day. But I can’t really understand why personally, as in my opinion this was just the sort of game the Mega CD needed more of. Ok, it can get a bit monotonous at times as the gameplay is pretty samey, but After Burner III sure is a lot of fun in short blasts. Oh, and did I mention how amazing the soundtrack is? 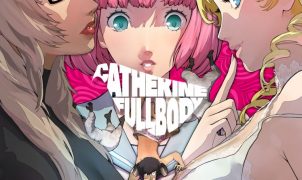 Well-rounded Flavor     If you have any interest in Catherine: Full Body, then you most likely fall into two distinct categories. You’re either a fan of the original…