Shenron, I wish for a worthy sequel! Every year since 2002 (with a slight exception for 2013), there has been a new video game in the long-running and much-beloved Dragonball Z franchise. While there have been quite a few mediocre and terrible entries over the decade, a few have stood out, especially in the case of last year’s Dragonball Xenoverse, which made it to my personal Top Ten Games List of 2015. Now that Xenoverse has sold incredibly well and the reaction to the game was strong, Bandai Namco heard the fans and created a sequel just over a year later.

Let’s be clear on one thing: Xenoverse 2 makes the original game pointless to play now that it has been released. Almost everything that was in the original game is also included in the sequel, while also having quite a few gameplay tweaks along the way. Story battles still take place in the Time Vault and have the same base ways to complete them, though they feel more dynamic, with characters from the massive franchise coming in and out to assist or hinder you. Combat has also been vastly improved, with combos actually needing some thought to fully complete, and a number of the Special Attacks that Dragonball is known for now have the added benefit of you being able to control them after they have unlocked. For example, the Bending Kamehameha maneuver can be bent at will so that if the opponent dodges they may be still hit with proper controls. The Stamina meter from the first Xenoverse also gets a base improvement by allowing you to spend a bar to continuously fly by an opponent and attack them after a successful launch.

The character creator is back in the second game, with some slight adjustments. While sadly not adding any additional races to play as each race now gets a unique transformation that powers them up. The Namekian race can grow giant, only taking damage to their Stamina bar instead of their health, while the Earthlings can unlock the Flying Nimbus and bring the smackdown to the enemy with the classic Power Pole from way back in the Dragonball franchise. All of these are nice touches and – alongside each race having additional small stat boosts – they make playing different custom characters worthwhile. As a bonus, you have a wide array of character slots to use instead of having to unlock them in the first Xenoverse.

The world has also improved from the small city that was in the first game. The whole place now feels like a bustling town, complete with a shopping center, a number of famous places brought from the whole of Dragonball, and additional places for each race to fully explore. While certainly more impressive than the first game, and with many more side quests and Masters to learn moves from, a major downside is the load times. Every time you finish up a battle and go back to the homeworld, the loading hellscape begins. I was able to use the restroom, wash my hands and briefly look at Twitter before the game fully loaded. After every battle, waiting for two to three minutes is a drag and made me wish for at least a minigame to play during them.

Not all is stuck in the loading destruction, however, as once everything is loaded up the fun can begin. A number of the major characters from every part of Dragonball can be found as Masters for you to train and learn moves from. While these learned senseis were in the original Xenoverse, they have received a massive improvement in how each special training session is unlocked. Instead of having to grind over and over again to get points to impress your Master, now you unlock them via special Advancement classes, which are a lot less time-consuming. It used to take upwards of an hour to unlock a move or two, but these can now be done all at once. After you take an advancement exam and go further in the story, the next level of Masters come into the fray. An additional bonus is that instead of your Masters being randomly placed in the town like the first Xenoverse, they now have set locations and will always be ready to get you to the next level. Even after completing the decently sized story, which covers all of the Dragonball Z series, there is still quite a bit to do. There are a number of side missions, which can be completed at any time (including basically everyone from Xenoverse). There are also special training missions, which grant bonuses depending on what race you are. If you are an Earthling, the Hercule missions will grant you bonus money compared to the others. A strange example is with the Majin clan, in that, if you give Buu enough food, he will then convert that food into children giving you bonus items and attacks (Yes that is how he breeds, apparently.) It’s a nice touch that provides even greater incentive to at least try out more than just one class. Heck, even after everything is all said and done, Xenoverse offers a good battle system for you and your friends to duke it out with a wide array of people in Dragonball Xenoverse. Every one of the characters has different stats and moves from one another, so even if you get tired of the character you make, there is still plenty more to battle it out with.

There are some minor things I disliked about Dragonball Xenoverse. I mentioned the awful loading times, and this just magnifies the tedium of having to grind out levels before being strong enough to wipe out the foes standing in your path. While it is certainly better than the first game, those that want a straight Dragonball fighting game may want to be aware. The story is also lacking in originality – you’ve already seen everything here in previous Dragonball games. While they add some of the movie exclusive characters into the fray, it isn’t enough to deviate away from the boredom that any longtime fan will feel after beating up Nappa in the same way again and again. Should a Dragonball Xenoverse 3 be made, they need to find a way to not tell the story again for the umpteenth time, as it was already stale eight games ago, and only gets worse as the years pass. The Online function is also only available for three hours at a time, which is a strange limit for a game that thrives on people beating up each other online.

Overall, Dragonball Xenoverse 2 is a fantastic ARPG, and it managed to genuinely surprise me at how different it is from the original. It’s the game that fans of the series have been wanting for a long time, and it will keep people playing after the story is all said and done. There is enough of the game to even entice players who don’t know much about the franchise to try it out as well. The release of this amazing game – coupled with Dragonball Super being streamed worldwide – really makes this an exciting time to be a fan of the Dragonball franchise!

“Full disclosure: This review is based on a review copy of Dragonball Xenoverse 2 given to HeyPoorPlayer by the publisher.” 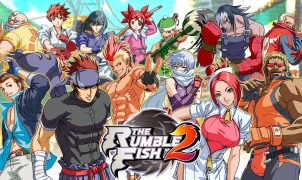