One of the most exciting things about virtual reality finally making making its way to our living rooms is the way it opens the door to new types of experiences which, until now, would seem downright ridiculous. Take Job Simulator for example, which was released alongside the PSVR. If someone told me last year that one of my favorite games of 2016 would have me brewing coffee, washing dishes, and fixing elaborate sandwiches in a virtual realm, I probably would have checked myself into a place full of crisp white suits and ample medication. However, that’s absolutely been the case thanks to the wondrous sense of immersion that the medium provides. That said, when it was announced that Sega’s azure-haired Vocaloid was getting a game that puts players in the front row of a virtual concert, I was more than happy to strap on my headset to face the music.

As a game, Hatsune Miku: VR Future Live is one in the loosest sense of the word. Think of it more as a concert experience that allows you to witness gaming’s favorite holographic starlet in a way never before possible. Gone are the complicated timed button presses and blister-inducing action of the previous games in the Project Diva series. Instead, you’ll enjoy this show among a throng of silhouetted fans as Miku performs a short concert, only occasionally waving your Move control to the rhythm or singing along with a song, which in turn can affect the on-stage action. In addition to impacting the performance itself, you’ll also unlock modules that replace your Move controller with various props, like fairy wands, glow sticks, lightsabers, and more. Performing well during these rhythm game segments will also unlock a total of 8 costume cards in 1st Stage, and each of these various outfits looks great and features plenty of character. Again, doing so isn’t especially taxing,

As the concert goes on,  prompts will appear when it’s time to match your hand movements with those of the crowd around you, with each gesture lasting just 30-seconds or so. In my experience, the game isn’t especially picky about how you actually move the controller though, so long as you’re waving and moving to the music it’s pretty forgiving. If you stay engaged over the course of the show and chant hard enough, Miku will provide you with your own private encore performance – which isn’t nearly as creepy as it sounds, thankfully. Sure, it sounds silly.  But trust me when I say the illusion of being being a fan in a packed arena full of adoring fans is surprisingly convincing. While you can’t freely roam around the stage during the performance, you can gesture towards different areas of the stage to get a better view of the show. Additionally, tapping the triangle button will put you in a balcony seat so that you can get a birds-eye view of Miku as she works the stage. Further selling the experience is the way the acoustics are actually affected depending on where you are standing. With that in mind, you’ll definitely get the most enjoyment out of Hatsune Miku: VR Future Live when playing with a quality surround sound system or a decent pair of headphones.

While the sense of immersion that Hatsune Miku: VR Future Live provides is impressive, it’s a bit disappointing that the game largely does away with the over-the-top performances their signature songstress is known for. In fact, save for occasionally vanishing to appear on a Jumbotron-sized screen at the back of the stage, you’d likely think she was just your typical pop idol. Given her nature as hologram, Sega could have taken advantage of the premise to create some really elaborate sets and dance routines that take advantage of the theme like those found in Hatsune Miku: Project Mirai DX and the previous Project Diva games. Instead we’re treated to some dance numbers that are, while incredibly convincing and well choreographed, still a big step down from what we’ve come to expect from the series. This is especially disappointing given just how much exciting the addition of VR could have made things.

1st Stage features seven songs, and you’re able to choose from two different songs after each performance following the show’s opening track. This adds some welcome replay value to the package, as it’s impossible to hear every song the game offers in a single performance. And there are some really great tunes to enjoy in this debut offering, with Weekender Girl by kz & Hachioji P, 39 by DECO*27 & sasakure.UK, and the infectiously energetic Love Song by Lamaze-P being some of the highlights. But honestly, there’s scarcely a bad song of the bunch. And if future concert packs come with similarly standout selections of music, then it’s a safe bet to say Miku fans will be in for a real treat.

Those going in expecting a frantic rhythm game like the previous entries in the Miku series will probably be disappointed with what this virtual concert has to offer. And it’s not hard to imagine some will be put off by what is essentially a $15 bundle of songs with very limited functionality as a game. However, when all is said and done, Sega has succeeded in achieving what they’ve set out to do: deliver a high-energy virtual concert that allows fans of their long-running Project Diva series to see their favorite starlet perform from the comfort of their own homes. It may not be the most compelling game out there, but it’s an entertaining experience that hardcore Hatsune Miku die-hards will likely adore. However, those who aren’t fans of singing along with virtual idols may want to check out the exceptional REZ Infinite or Thumper instead to get their rhythm game fix on the PSVR. Personally, I’m looking forward to the next collection of songs. I just hope that Sega does something a bit more exciting with the choreography to fully take advantage of Sony’s headset the next time around. 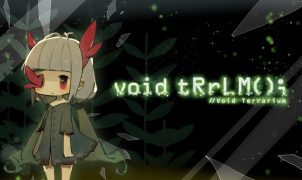 Life Finds a Way     As far as the annual NIS creepy-cute games go, void tRrLM(); //Void Terrarium sure stands out as being one of the most unique. From its…