Born in the Bayou!

Mafia III is something of a misnomer as a title, since it’s not really about the workings of the shadowy Cosa Nostra. It’s about the trials and travails of Lincoln Clay – a Vietnam veteran coming home to New Bordeaux (a fictionalized facsimile of New Orleans in the late sixties). Of course, Lincoln’s trying to put his violent past behind him, but he just can’t help doing a few illegal favours to help out his adoptive family in their hour of need. Just as you’d expect, the course of criminality doth seldom run smooth – with him and his friends being betrayed by Mafiosi kingpin: Joseph Marconi. After being shot in the skull and left for dead, Lincoln is set on the well-worn path to revenge. Now Lincoln wants to take over Marconi’s empire piece by piece. Helping Lincoln in this task can be entertaining, but just as Lincoln risks losing his soul in an all-consuming quest for vengeance, you might risk losing your interest by just how relentlessly violent his quest is.

Mafia III’s meat and potatoes is in the combat. The weapons you’ll wield pack a satisfying punch, which you’ll notice the first time you nail a wince-inducingly splatterific headshot down the wobbly sight of a bolt-action rifle. Cover-shooting is particularly exciting because your health regeneration is limited to only the health bar you’re currently on – and once one bar gets whittled down, you’ll need to find a medicine cabinet with an adrenaline shot to fully heal. Some more expansive missions will require you to choose your cover carefully – maybe even spending some of your ill-gotten gains on restocking your guns, explosives and body armour (courtesy of an arms dealer who you can summon in his orange camper van). You’ll want to call for your consiglierre often so you can stash your cash. When you die, you’ll lose half of the money in your wallet – so when the bullets start flying and Lincoln is hurting, the possibility of losing progress and unstashed cash makes a gunfight nail-bitingly tense. What’s even better, is that virtually every mission allows you to mix and match stealth and gunplay. Taking a cue from Assassin’s Creed, Lincoln can whistle to attract enemies to where he’s hiding. He can then shank them savagely with his combat knife and pull their bodies behind cover, leaving nearby patrols none-the-wiser. The problem with stealth is that is that the difficulty doesn’t scale so well as the all-guns-blazing approach. Unlike the Batman: Arkham series, where even the lowliest goons will continue to devise new ways to thwart your espionage attempts – the henchmen in Mafia III are persistently dumb. Even in the late game – when your murderous exploits have supposedly become legendary – baddies continue to subscribe to the: “Gee, I’d better go investigate that whistling noise, on my own, ambling over casually, leaving myself open for being knifed” school of thought. There is still a measure of fun to be had with stealth, but it diminishes with the challenge.

The plot serves as a contrived vehicle for Mafia III’s basic gameplay loop: you murder your way through a stronghold, killing a supposedly important, faceless goon – so you can go on to murder a more prominent faceless goon, taking over their criminal operation for extra stat/weapon/item unlocks and passive income. It’s a predictable, and almost soullessly routine experience – but it is compelling. It’s also tempting to jimmy open the various junction boxes throughout the city to bug communications. This will highlight various collectibles on the map – such as lovingly restored sixties Playboy magazines featuring gorgeous nudie ladies, and even in-depth interviews with important period figures like Stanley Kubrick! (See, I really do read Playboy for the articles!) Thank God people in New Bordeaux like to mention their full address and where they’ve stashed their Playboys while talking on the phone! To further build the income your underbosses provide, you can do side missions for them. These extra tasks underline how little Mafia III has to offer outside of the all the mass-murder. Don’t expect to be playing golf, skydiving, flying planes, manning turrets in daring getaways or anything like that. Your side missions usually just put subtle twists on the “kill everyone here” template – like transporting illicit goods back to one of your rackets. Once you’ve slashed and shot your way through yet another stronghold, it’ll be a case of driving contraband back to the nearest friendly depot. Mafia III has a nicely nuanced car-to-car combat system, where you can target enemy tires and fuel tanks while driving parallel with them. However, most of the time you won’t even face any resistance while ferrying goods – and you’ll be playing New Orleans Truck Simulator for 5-10 minutes as you drive to the depot, tapping your foot to the groovy beats on the radio.

Right out the gate – in a disclaimer displayed right after the first loading screen – Mafia III lets you know it’s going for a frank portrayal of the fractious race relations of the American south during the sixties. You’ll hear the “n word” yelled at you a great number of times in beautifully voice acted, thick-as-crocodile-steak cajun accents. However, racism is just like all the other topical issues of the day Mafia III presents: you’ll hear it mentioned by bystanders or on the radio, but it’s just flavour, and it’s not integral to Lincoln’s straightforward revenge story. I recall it being advertised that Lincoln would get pulled over by bigoted police just for being a black man driving a nice car. However, this never once happened to me in my many hours of play. Why? Probably because it would be an annoying mechanic. That’s the central problem with Mafia III trying to tackle racism: it’s too attached to the established conventions of power-fantasy sandbox shooters to adequately portray the disempowered reality of being a victim of racism. Racism is mainly a prop to make the villians more cartoonishly evil – like the confederate-flag-festooned “Dixie Mafia” who use about ten different racial slurs just discussing the weather – so you feel no remorse in blasting and garroting them in their hundreds. This unsubtle, gimmicky treatment of racism is just a part of the wider narrative problems with Mafia III.

The Mafia series of games always distinguished themselves by placing a heavy premium on immersion – often going long stretches without violence, just to give you a taste of the day-to-day life of its characters. This is why I had high expectations Mafia III would be able to create a world for me that was so real and complete, I’d be able to smell the cornbread and gumbo in the thick, humid air. The classic Cadillacs and Chevrolets were there; the authentic-sounding cajun dialogue was there (sir-ah, say sir!); the greatest hits of the sixties from the Stones to the Supremes were blaring on every car radio. All the right set-pieces were there, and rendered beautifully, but I never felt like I was there. There’s no tossing beads at beautiful girls in packed bars during the mardi-gras season; there’s no choosing whether to give in and use the “coloured” bathrooms, or sit at the back of a bus to avoid being arrested; there’s no buying sugar-covered, deep-fried foods while basking in the glow of parade floats. Mafia III never tries to absorb you in this world through its interactive component. Frankly, for a game that touts immersion in its unique setting as a strong point – that’s a damn shame.

Mafia III lacks the depth and gameplay variety of the Grand Theft Auto series. It’s a repetitive murder simulator with a light garnish of vehicular mayhem and open-world scavenger hunting. The potentially engrossing setting of New Orleans in the turbulent late sixties ends up feeling like an interchangeable backdrop for a rote, predictable procession of factory-line killing.

So if y’all will permit me to summarize this here video-ma-game: Mafia III is a basic, but fundamentally sound experience about shooting and stealthily stabbing people – with a healthy, but superficial, sprinkling of southern-fried flavour. It ain’t great, but if you’ve a hankering for the next GTA, and are reckonin’ on something to tide you over, this might just wet yer whistle – boy-ah, I’ll tell ya’ huh-what!

Full disclosure: This review is based on a retail Playstation 4 copy purchased by the reviewer. 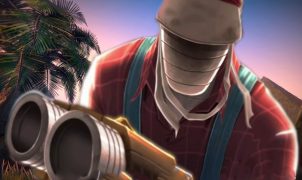 In Immortal Redneck you soon realize you aren’t in Kansas anymore… Whew boy! Ay howdy, have I got a game for you guys to sink your teeth into! YEEHAW!…