You have to give it to Cave, they’re a studio with some strong convictions. Despite the death of the arcade scene, the Shinjuku, Tokyo-based developer has been diligently cranking out bullet hell shooters since 1994 to appease their vocal niche. And over the course of their two-decade history, few series in their catalog are as highly regarded as DoDonPachi. Now, PC-bound flyboys are in luck, as one of the finest entries in the series has soared onto Steam, allowing a new breed of gamers to experience its exhilarating blend of manic, bullet-dodging action.

Originally released in Japanese arcades as DoDonPachi DaiFukkatsu (which literally translates to Angry Leader Bee Great Resurrection), and later on the Xbox 360, DoDonPachi Resurrection delivers a well of frantic action to satisfy the needs of even the most discerning fan of the shmup genre. The game includes both the 1.5 and 1.51 revision of the original game, along with DoDonPachi DaiFukkatsu Black Label and several different Arrange Modes for each title, each offering their own features and tweaks to the original formula. As you probably already guessed, the story of DoDonPachi Resurrection is largely an unintelligible ball of anime tropes that simply serves as a backdrop to the airborne action. To sum things up, disruptions have been occurring in the space-time fabric. As it turns out, humanity is on the brink of destruction at the hands of the Elemental Dolls who once protected mankind in the previous game, who’re none too happy about the way they were treated by their human creators. Now, players once again hop into the cockpits of one of the three DonPachi Corps ships to save the day.

Of course, in true space shooter fashion, saving the day will require soaring through a variety of futuristic cities, neon-lit factories, and underground bases as you dodge billions of brightly colored bullets and battle hundreds of enemy ships, tanks, and towering metal monstrosities. DoDonPachi Resurrection isn’t a shooter for the faint of heart. It’s a lightning-fast game that revels in inundating players with staggering waves of devastating fire that erupt like dazzling pyrotechnic displays on-screen. However, with practice and perseverance, you’ll eventually be able to recognize the plentiful bullet patterns that fill the screen, and that’s when the real fun begins as you eventually learn to navigate the massive waves of enemy fire, chaining together thousands of hit combos to send your score multiplier into the stratosphere. It’s here in this intoxicating bullet ballet that DoDonPachi Resurrection really shines, as Cave has masterfully crafted a shooter that delivers an almost hypnotic fusion of shooting and dodging that becomes nigh impossible to put down once you come to grips with the fundamentals. One of the most impressive things about DoDonPachi Resurrection is just how much freedom it affords the player. You have three ships you can select from (not including a handful of bonus craft including the Tigerschwert from KETSUI). Type A is a speedy ship that fires a tight and focused shot pattern, Type B is a bit slower, but can douse the screen in waves of fire with its satellite craft, and Type C, which is the slowest but is able to punish enemy craft and bosses with a wide payload. Additionally, you can choose a variety of styles to cater to your skillset. For example, Bomb Style is ideal for casual players, will allow you to unleash an auto-bomb just before your ship is shot down, which effectively allows you to use your bombs as additional lives. Meanwhile, Strong Style, removes bombs from the equation, instead of allowing you to focus on standard and power attacks at your will, changing the focus of your shot patterns. Lastly, Power Style is a hybrid of the aforementioned modes.

In addition to the various craft and modes,  DoDonPachi Resurrection also introduces a few other interesting mechanics to spice things up. The Counter Laser System allows you to cancel out purple laser-based attacks with your own laser, adding a fresh layer of strategy to the title. Additionally, destroying enemies fills your Hyper Gauge, which, when filled, allows you to execute a Hyper Attack, which unleashes a huge volley of fire while allowing you to temporarily cancel out oncoming bullets. Used together, these two mechanics feel more than a little similar to switching polarities in Ikaruga. If you think that sounds awesome, that’s because it is. Simply put, there’s a whole lot of meat to this game’s package, and devoted players will find a virtual smorgasbord ways to experiment with the game’s numerous systems to perfect their play-style. In addition to DoDonPachi Resurrection’s impressive selection of different game modes, the game also features the bells and whistles you’ve probably come to expect from the genre. There’s a training mode, the ability to save your replays, score attack mode, and perhaps most importantly, online leaderboards for players to climb. The game also has a wide array of display options available, allowing you to toggle between 4:3 and 16:9 aspect ratios as well as the ever-important “tate” mode to deliver that authentic vertical shooter experience.

In terms of presentation, Resurrection is a 2D masterpiece. Each of the game’s stages is varied and filled with tiny details. From ships that sink when riddled with gunfire to the giant mechanical tanks that shift and convert into even more menacing forms, Cave’s omnipresent charm and attention to detail really shine throughout the entire production. And to top it off, the game runs like greased lightning, never missing a beat – even when hundreds upon hundreds of bullets and lasers are filling the entire screen. The soundtrack is equally impressive. Composer Manabu Namiki’s compositions are pulse-pounding soundscapes that fit the action like a glove and keep you immersed in the over-the-top chaos unfolding on-screen. Cave are no slouches when it comes to creating a shooter that assaults the senses, and in this regard Resurrection really is a best in class experience.

When all is said and done, Cave has done a masterful job bringing DoDonPachi Resurrection to Steam. With its challenging gameplay (so long as you’re not a quarter-feeding chump), massive bosses, and incredibly deep mechanics, it certainly ranks as one of the finest shooters to grace the platform. The selection of different modes to master is robust, and players looking for a great score chaser will certainly find what they’re looking for here. Simply put, if you’re a fan of the space shooter genre, you owe it to yourself to add this game to your Steam library. Now if you’ll excuse me, I have a world to save.

Full disclosure: This review is based on a review copy provided to hey Poor Player by the publisher 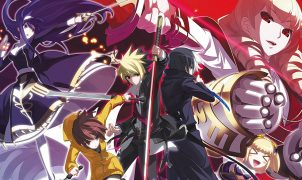 Under Pressure   With the recent releases of Street Fighter V: Arcade Edition and Dragon Ball FighterZ, it’s been a great time to be a fighting game fan. Thankfully,…