Dancing For My Life

I didn’t expect much from The Metronomicon, perhaps because it arrived on my desk right after the spectacularly disappointing Office Freakout. But when I finally sat down to playing it, it was three hours before I looked up, bleary-eyed, to see what time it was, and while my first thought was “Holy crap, I can’t believe it’s been that long”, my second thought was “maybe just a few more songs”.

Yep. It’s one of those games. If you don’t like rhythm games, I can’t see Metronomicon doing much to attract you to the genre, but if you’re a fan like me, you’ll find it a quirky, addictive, and thoroughly enjoyable addition to the scene. 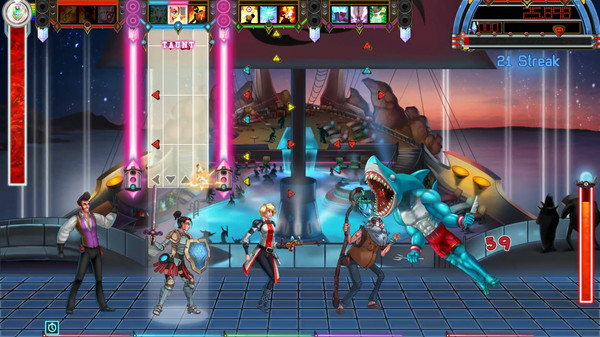 The game styles itself as a hybrid of RPGs and music games, but it’s definitely more the latter than the former – those expecting a mixture as inventive as Crypt of the Necrodancer may find themselves disappointed. The Metronomicon is a straight-up rhythm game – arrows fall from the top of the screen and you tap buttons to the beat to match them. Successfully hitting several cues in a row performs an ability in the standard RPG style (attacks, heals, buffs, debuffs, etc.), and switching between different party members allows you to perform different abilities, with combat happening in real-time. Each hero has three tiers of abilities, with each new ability unlocked requiring you to perform a longer sequence of dance moves. For some heroes, like the sorceress Violet, all three of these abilities have different uses, and you’ll need to decide when to continue to the tier three ability or stop early. For others, mostly damage-based heroes like Rolf, the stronger ability is always better. You aren’t penalized for shifting between heroes, only for missing beats, which costs you health.

Levels in the story mode are a single song each, and each song is completed by getting a certain number of points, rather than killing a set number of enemies. So, yeah, it’s basically Rock Band. But personally, I don’t mind the game’s dumbed-down approach to RPG mechanics. If I wanted to focus on the intricacies of different party builds, deep turn-based strategy, or optimizing complex gear loadouts (rather than the simple, two-items-per-hero system Metronomicon uses) there’s plenty of other games to scratch that itch. What Metronomicon offers is simple, fun, fast combat, with the RPG elements adding just enough extra depth and strategy considerations to keep the classic rhythm gameplay feeling fresh. Streamlining everything makes it that much more addictive, that much faster to jump from one toe-tapping combat to the next. 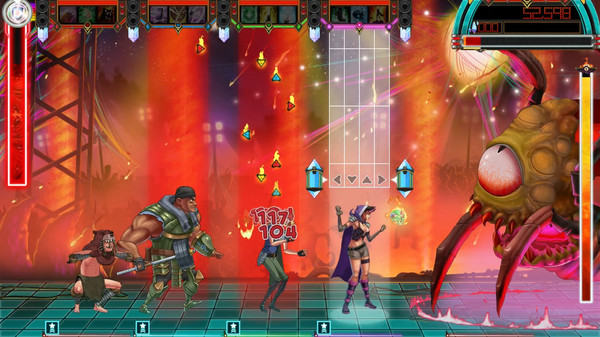 Of course, a game like this is only as good as its soundtrack, and Metronomicon delivers on that front and then some. I don’t even like electronic music typically (I’m more of a classic rock and metal kinda guy), but I still sound myself humming and tapping my feet to the soundtrack’s catchy beats. The soundtrack offers exclusive tracks from Jimmy Urine and Shiny Toy Guns, if that tickles your fancy, though I personally have absolutely no idea who either of those people are. If you do choose to buy the game, I highly recommend picking up the soundtrack bundle for an extra $6.

The story, on the other hand, is utterly forgettable. It’s a fun idea: about 40 years ago, massive dance parties filled with began crashing into the world. A nightclub smashes into a mountain, a rave crushes a forest, etc, each time bringing with it terrifying dance-crazy monsters. In opposition, a wizard discovers how to harness the power of dance for magical combat and founds a school called The Neon Shield dedicated to defeating these monsters and finding the source of the parties. Some of the characters are charming enough (though others, like Clark, are just annoying), but none of them have any real personality or interesting motivations. I guess it’s a nice touch that Puubo went to the trouble of fully voice acting the game, but for the most part characters might as well be cardboard cutouts with ability slots, and skipping cutscenes is a good way to warm up your fingers before jumping back into the fray. 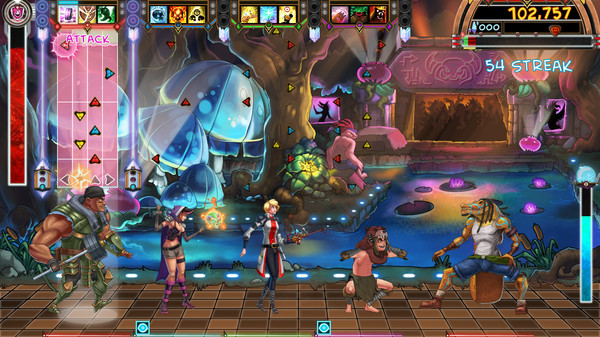 One major issue with the game’s design is that it’s impossible to pay attention to everything going on at once. Look at the above image. You need to keep track of not one, but four rows of notes, make sure the health bar on the left doesn’t drop too low, pay attention to the circle above the health bar in case it fills up and you need to activate a group attack (functionally the same as Guitar Hero or Rock Band‘s “Star Power”), note the enemy’s health and elemental type on the right, and watch the timer and score in the top right corner to see how close you are to completing the level. The result of this is that the beautiful, intricately designed backgrounds and animations get completely ignored, especially the enemy designs. A couple screenshots up I saw a dope-looking shark that I don’t remember at all being in the game, and I played through that whole section.

All this makes the game a lot more challenging than traditional rhythm games, and personally I couldn’t handle any difficulty harder than “easy” (though of course difficulty tolerance varies greatly from person to person.) If you like dance games but felt they didn’t provide enough of a masochistic level of challenge, Metronomicon might be the game for you. 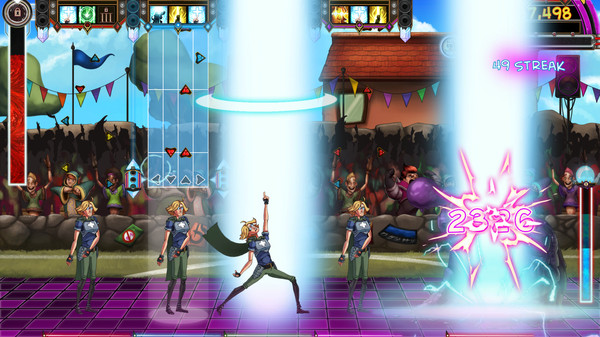 The biggest problem with the game, though, is that it’s just a bit too long. I know for a lot of gamers time spent is the greatest determinant of how good a game is, and as a broke college student myself I certainly understand wanting to get value for your money. Hell, most of the Hey Poor Player staff is broke college students – hence the name. But after the first few areas, The Metronomicon gets repetitive, eventually resorting to keeping things fresh by ramping up the challenge to a ridiculous degree. Party members and gear are discovered too infrequently, and don’t do enough to drastically change the gameplay. No matter what collection of heroes you settle on, you’re basically gonna want the standard adventuring party setup of tank, glass cannon, healer, and “other”.

Traditional music games (and I know I keep bringing them up but they really are the best frame of reference for this game) combat their samey gameplay by being party games. Sure, playing through the story mode of Beatles Rock Band might have had even less variety than Metronomicon, but I never cared because I was playing it with my brother and we were having a great time shittily singing along with “I Am The Walrus”. That said, the developers have said they may add multiplayer post-launch, and if that’s the case I can see Metronomicon becoming one of my favorite rhythm games of all time. 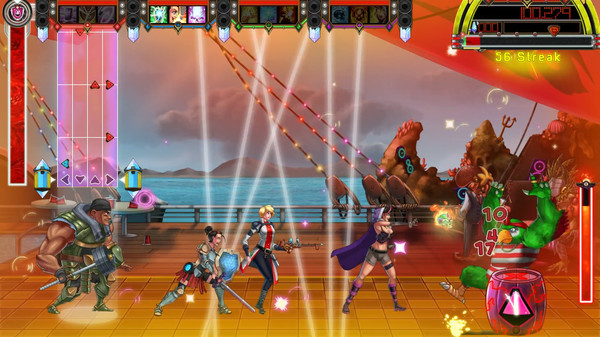 But in the meantime, it’s like I said up front: if you’re looking for a deep RPG experience, look elsewhere. But if you want one of the finest singeplayer rhythm games available on the Steam storefront, a game that will have you thinking, dancing, and always looking for “one more level”, then I can confidently recommend The Metronomicon.

Full disclosure: This review is based on a review copy of The Metronomicon given to HeyPoorPlayer by the publisher.

Samurai Shodown’s Jump To Epic Games Store Is A Fun, But Not Quite Flawless, “Victoly”     Watch our original Samurai Shodown review above or read our review of…