Let’s just start by saying if you haven’t seen Daredevil or Jessica Jones on Netflix yet, get yourself there right now and binge like you’ve never binged on anything in your life! Marvel has changed the game with their Netflix exclusive lineups, and they’ve assured us that they’re just getting started. Luke Cage now joins the ranks, having already proven himself a worthy character with his cameo on Jessica Jones, and we are still promised Iron Fist and The Defenders in 2017.  The Punisher, who blew us all away (and a few others if I might say so) in season two of Daredevil, will also be making the Netflix rounds in 2017, but he will more than likely remain a standalone character in the Marvel streaming lineup.

Luke Cage is not the Marvel series we’ve been used to up to this point. Daredevil, while not always, could dial it up pretty high when it came to over-the-top violence. Jessica Jones got a little NSFWy with some of the sexual content, and it feels as though Luke Cage is going to amp the adult content up even more with a new, grittier take on both. But I’m not complaining! It’s nice to see the comic book characters of my, and so many other’s youth, being taken seriously and seen in a more grown up light. Our childhood heroes are growing up with us, and there’s something awe-inspiring about that! Like it’s predecessors, the first episode of Luke Cage starts with a series of incredibly vital character introductions. We of course already know Luke Cage, but there’s a medley of other characters that are owed their due and we mustn’t forget them. First on that list is Cottonmouth. Cornell Cottonmouth is a pretty big figure in the Luke Cage story line (not to be confused with Burchell Clemens of the Serpent Society) and we can be certain that there’s going to be a lot of him in the episodes to come, and I’m not saying that just because of that epic beat down at the end of the first episode!

We also have Misty Knight starting out in episode one. While her own story is pretty ensconced in the overarching Marvel universe, where we’ll see her end up is anyone’s best guess, though it will more than likely serve as a good tie in for Iron Fist. Let’s not forget Alfre Woodard as Mariah Dillard. While episode one does not let on too much about where she stands in all of this, her connection with Cottonmouth and undeniably convenient position of power within the community might pit her as a threat we won’t be aware of until it’s too late.

Luke Cage’s first episode begins and ends with a very different feel to it than Daredevil and Jessica Jones, and that’s a good thing. Different flavors across story lines are what helps keep these characters alive, and Harlem is just another one of those characters: a roiling community underneath the skin, waiting to burst in the wave of everything that’s going on. To be honest, that’s a feeling that Hell’s Kitchen just didn’t convey in Daredevil or Jessica Jones (was Jessica Jones in Hell’s Kitchen? They mentioned it like every three scenes in Daredevil but not once it seemed in Jones) and as they tie the events of the show in with a lot of the heat of the Black Lives Matters movement and corrupted politics, Luke Cage feels like it might hit closer to home than its older brother and sister did. There seems to be a lot of self-reflection within this community both on a group and individual level, and the plot is going to delve very deep before the first season of Luke Cage is done.

I want to mention one more thing that Luke Cage is bringing to the table that we haven’t seen yet: music. Because of where Luke Cage is coming from (both the show and the character) Hip-Hop is a must for this series, and so far the show has been delivering even before the series aired by way of its numerous trailers. If you haven’t heard it yet, check out “Bulletproof Love” by Younge, Muhammad, and Method Man here. There’s more where that comes from, and I can’t wait! This may be the first Marvel soundtrack that I’m actually excited for as it’s been confirmed that further inspiration has been taken from the Wu-Tang clan, Mahalia Jackson, Nina Simone, and even Ennio Morricone.

Overall, the first episode of Luke Cage is not what you would call “action packed”, but the beauty in that is that it doesn’t have to be. Marvel has already set the bar for what we can expect, and we know they’ll only ever go higher and higher from that initial setup. That being said, the fact that Luke Cage is its own character and environment away from the denizens and problems of Hell’s Kitchen gives us a fresh perspective on the scope that upcoming series Iron Fist and Defenders will provide for us.

I don’t know about the rest of you, but Luke Cage may prove to be my favorite addition to the Marvel cinematic universe yet.

Check out the trailer below!

All episodes are now available to stream on Netflix. 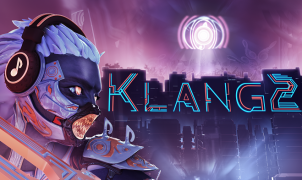 Klang 2 Review: Music to My Ears     Rhythm-based combat has always been such a fickle mechanic. A tantalizing fruit for many that only some have nibbled on,…