MAGES.INC’s visual novel Steins;Gate has been through space and time, or at least from console to console, since 2009, bringing to players a unique story involving time travel and the consequences of attempting to control what we cannot understand. Now, in 2016, Steins;Gate has arrived on PC through Steam. Does the popular sci-fi story still hold its entertainment value all these years later, or has it finally started to become outdated? There’s only one way to find out! (Warning: Light Spoilers Ahead!)

Steins;Gate is a quirky nonlinear visual novel revolving around the concept of time travel that follows the antics of 18-year-old Rinatoru Okabe. Although only a college student in actuality, Okabe has already earned himself the title of “Evil Mad Scientist”, and prefers to go by the name “Kyouma Hououin”. Okabe has even set up his own personal laboratory, dubbed the “Future Gadget Laboratory”. It is the goal of both Hououin and the other members of the Future Gadget Laboratory  to create 108 high-tech devices in order to help thwart a collective evil dubbed “The Organization” that is constantly on his tail and, in the end, free the world by plunging it into the depths of chaos. Sounds pretty action-packed, huh? I hope you aren’t too attached to that storyline though, because none of it is actually true.

In reality Okabae what is known in Japanese culture as a “chuunibyou”. Chuunibyou, which translates into “second-year middle school sickness”, is essentially a term used for someone who hasn’t entirely grown out of wanting, or in some cases (such as Okabe’s) pretending, to be a character straight out of an anime or video game. Although the term itself may be foreign to most of you (I know that it was to me), I’m almost entirely certain that you’ve seen someone who fits the bill. Think back to high school or college… Do you remember someone who proclaimed to have “Dark Powers” or wore a replica Naruto headband because they thought that it was cool? Yeah, that’s a chuunibyou; it’s also your Steins;Gate protagonist!

There’s no denying that Okabe is a huge dork and quite disillusioned, he isn’t all talk. Hie seems to be quite knowledgeable when it comes to various sciences and, when he isn’t pretending that his demon arm is trying to overpower him, can (mostly) hold his own during scientific discussions. His goal to create 108 unique and useful gadgets (to plunge the world into chaos, or whatever) is also not a lie. Through the combined efforts of Okabe and his otaku friend Daru, the Future Gadget Laboratory has even managed to create a few gadgets! Unfortunately, though intriguing, none of his inventions are actually useful… that is, until Okabe discovers that his latest Future Gadget, the PhoneWave (name subject to change), is a time machine; a time machine that will send him on an exciting journey through space and time, forever changing his perception of reality. Naturally, things only get more hectic from that point on. Since the story of Steins;Gate involves time travel, you might immediately dismiss the game as something that’s merely re-hashing a topic that’s been covered by oh-so-may other games, books, movies, and shows, and in a sense you would be right I suppose. Time travel has been done quite a bit. That’s really where the differences end, however. Amazingly, Steins;Gate manages to take a common sci-fi trope such as time travel and make it into something that stands out and it does so simply through virtue of excellent narration. I want to spoil as little as I can (after all, there wouldn’t be a point in playing the game otherwise!), so I won’t get into specific storyline details. Rather, what I can comment on is the fact that the storyline manages to somehow weave a rather morbid blend of things such as real-life science and history, ethics, and questions of human nature and existence together with a large amount of humor, otaku culture, and even references to 4chan. While the expected result from attempting to blend so many different, and in many cases contradicting, elements together would be something chaotic, Steins;Gate somehow manages to make a cohesive story with a myriad of delicately-placed highs and lows laced throughout the story (depending upon how you play).

You can’t deliver a good story, no matter how appealing, without good characters, right? Right! Good thing Steins;Gate didn’t stumble on that front, either! The cast itself is yet another example of Steins;Gate making something ordinary into something extraordinary. Like with nearly everything else out there, this game’s characters can neatly fit into tropes. We have the chuunibyou, the otaku, the tsundere, the ditz… the list goes on. Why, then, are they so endearing? It’s actually kind of a tough question, and I can’t really give a definite answer. After all, this is merely one writer’s opinion. If you ask me however, I think that it all breaks down to good character development and a decent level of relatability. Although many of the characters start out by fitting into stereotypes, many of them grow and develop throughout the course of the story. Even when characters don’t necessarily stray far from their original tropes, there always seems to be some way for the player, in one aspect or another, to relate to each and every character. There’s also the very-important cellphone. What does a cell phone have to do with a visual novel, you may ask? Well, in Steins;Gate, quite a bit actually. Although a visual novel, there are quite a few points within Steins;Gate that allow for player interactivity; many of these are through the use of Okabe’s cellphone. Much like we get texts from our friends in real life (if you don’t, just pretend that you do) Okabe will get texts from his friends throughout the game, many of which he can respond to. A lot of the time there is not merely one, but several responses that the player can choose from. Of course not every choice is of dire consequence, but the fact that you can have optional conversations with your friends is

Although the “novel” part of of a visual novel is probably the most important part the “visual” portion still has a lot of pull too, and Steins;Gate definitely delivered on that front. From adorable maid/cat hybrid Faris, to super hacka and otaku extraordinaire Daru, to our often disheveled and always outspoken Protagonist Kyouma Hououin, each character within Steins;Gate has been visually detailed to the point of nearly coming alive in a style which manages to be quite detailed without ever going over-the-top (most of the time, anyway). Now I know that this might make some people upset, but I’m going to say it anyway; I generally prefer to avoid subs. I’m a very auditory person and, outside of music, it generally bothers me when I can’t understand what is being said to me. If Japanese voiceovers accompany English text, I generally don’t wait for the spoken dialogue to end before proceeding because, well, I can’t understand it.  With that being said however, I found myself stopping to listen to the voice acting on quite a few occasions during my time with Steins;Gate, most notably during Okabe’s monologues. Even though I couldn’t understand what was being said, I often felt compelled to listen to the characters speak solely based on the fact that the voice acting itself sounded so good. It’s easy to get engaged in a language that you don’t understand when things sound exciting, such as during an action sequence in a subbed anime, but stopping to listen to what sounds like casual banter (and Okabe’s wonderfully ridiculous make-believe conversations) in a game, despite not understanding it, is something else entirely and I wholeheartedly applaud Steins;Gate for being able to do that.

The Steins;Gate soundtrack also plays a very nice role in adding to the overall quality of the game. Adopting a stance that I would label as “less is more” the Steins;Gate OST features a collection of songs that, although small in number, effectively convey the moment-at-hand while never attempting to overthrow the more important presences of both the writing and visuals. It also does a great job with never distracting from the player’s ability to read, with even the more serious songs only being heavy enough just to help convey the tone and nothing more. Not surprisingly, this shining example of a visual novel manages to set the bar for others in its genre even after all of these years. With an enthralling storyline, diverse cast of characters, and the ability to actively shape the story’s outcome, Steins;Gate continues to come out on top.

“Full disclosure: This review is based on a review copy of Steins;Gate given to HeyPoorPlayer by the publisher.” 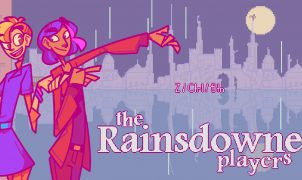