When NASCAR Heat Evolution arrived in the Hey Poor Player office, we knew this was one to draw short straws on. When a developer brings out a new game following some heavy advertising into a genre which saw domination from EA for a considerable length of time but then a hiatus from pretty much 2009 to today, we anticipated a new breath of fresh air to resurrect our old memories of NASCAR games from back in the day. Many hours of my youth were spent playing NASCAR games, and I was looking forward to some action-packed gameplay. Dusenberry Martin Racing and Monster Games produced the original NASCAR Heat back in the heyday of the original PlayStation, and for a totally new game to be the first to be released on the latest-gen consoles is truly a step in a new direction.

At first glance, things look promising. All 23 licensed tracks and all the current drivers and sponsors are in there, too. The game is split into Race, Challenges, Championship, Career and Multiplayer. With an options menu added to the list, the initial preface to the game looks comprehensive. The race section of NASCAR Heat Evolution is where most players would look at starting their game… gloves on, helmet on, let’s choose our favorite track and get straight behind the wheel! Unfortunately, that’s not so. While the game features all 23 tracks from the sprint car series, it only allows players to choose from a handful of the tracks from the start. Only by gaining points or achieving speed ratings will you then again access to all of the tracks the game has to offer. I was looking forward to picking out Watkins Glen for some tight turns and close up action, a track I raced on myself about 15 years ago. The unlocking of tracks format is not so typical for NASCAR games. And while my initial 8000 points allowed me to add a few more tracks, but I needed to spend another few hours whipping around my available tracks to unlock Watkins Glen like I so wanted.

The challenges by its very definition are pretty much a series of randomly gifted mini games; a throw down of the glove from another driver to see if you can achieve a certain position within a certain number of laps, each one delivered with a reference to a real life event or statistic from the driver making the challenge. The reality of NASCAR and its “fraction of a second shaving” nature make these levels somewhat unrealistic – Typically these challenges are  to start at the back of the pack and get to pole position in five laps. Although these levels do make for a fun thrash around. The Championship option lets you run a season as your favorite driver, starting out with a smaller six course tournament you can eventually build up to a full Sprint Cup season as you progress through the game

The Career option starts you off from the very beginning of it all. You have a car (albeit a substantially slower one without sponsorship) but this gives you the chance to enter qualifying, make your first dollar and start your very own NASCAR rags-to-riches story. Its a tough one to get off the ground, your generic race car makes qualification hard against the other established racers, but with time and perseverance you can start your journey. This part of the game is where I enjoyed the most.

The multiplayer option supports up to 40 racers at one time although each time I jumped into the online play there were just a few racers burning rubber across the game’s online racetracks.. The dynamic of the online game sees many of the online racers treating the race as a crash fest, although the non-bumping option does eliminate this somewhat.

The down side to this game is its simplistic bare bones nature. It is lacking many of the features that we would expect from such a technically complicated motorsport. For instance, there is no map in the corner to see the positioning of other cars on the track, the cars handling options are also pretty limited. By tweaking the handling menus there are definite improvements to be made but the overall dynamics of the car still feel like an arcade racer. There is no realistic damage to the cars, even after the damage control adjustment, allowing you to bounce and bumble through races.

Compared to Forza Motorsport 6′s twenty dollar NASCAR expansion this game looks somewhat unfinished and that it maybe would have been an amicable purchase if it were six years ago, but given what we are used to in terms of finely polished PS4 offerings this game does fall short. Perhaps in future updates we will see this smaller developer take this game to what fans are looking for but for right now it seems a way away from a victory lane offering.

“Full disclosure: This review is based on a review copy of NASCAR Heat Evolution given to HeyPoorPlayer by the publisher.” 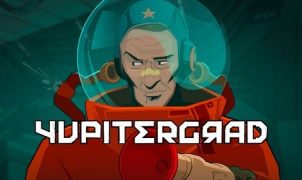