Jumping to the melody Video games these days can be exhausting. From the swarm of bloody shooters, to the colossal amount of role playing games that unleash at the end of the summer, sometimes all one wants to do is relax and listen to some tunes in a soothing environment. Sometimes its not about claiming glory in combat, but rather a gentle jaunt through the forest, playing as a tiny critter. Enter Tadpole Treble, a rhythm-centric game from the mind of the webcomic Brawl in the Family‘s creator, Matthew Taranto.  What started out as a Kickstarter in 2013 and originally set to release late 2014, the game hit a few delays, and finally came out this month. Was the wait worth the extra two years of development? While Tadpole Treble is out for the Wii U, this review focuses on the Steam version, though they play the same way.

Tadpole Treble delivers the most fun that I have had in a rhythm game in recent memory. You control a tadpole who has recently hatched and went too far away from his family, collecting food bites and dodging rocks and hungry fish while you try and find your brood. The stage layouts are all from left to right, but a fun twist on the general layout is that everything is on a musical score that plays out the stage’s music. Every time you dodge a rock formation or eat, the music plays along, and if you get good at the levels, songs play perfectly. When you get enough power from devouring enough edibles, you can even smash your way through the pesky objects in your way.  The levels are usually at the right length at the time, enough to challenge you without lasting long enough for you to become exhausted at the process.

Controlling your tadpole friend is used with the arrow or WASD keys to swim up and down the music sheet that is the level and the space bar is used to swipe your way through obstacles. Sometimes in order to get the most points you must hit particular beats in a song at the right time to get through properly or to avoid taking damage. Tadpole Treble, while not extremely challenging, is hard enough to keep your eye on the ball to avoid the bad guys and to collect the items you need to power your way up the food chain. The soundtrack to Tadpole Treble is downright sweet. The songs for every level is satisfying and are varied from each other. You may go from a chiptune jaunt to an absolutely lovely vocal beat about first love, and they all blend together to create one of the most memorable soundtracks for original songs that I have played in years. The entire time I played Tadpole Treble, I did not find a single song that I didn’t fall in love with, even when I had to replay the same parts of a level multiple times do to failing a level. Heck, even if the game’s children’s storybook graphics and fun playstyle grab you, the soundtrack will bring out such a sense of pure nostalgia throughout that I would be shocked if it didn’t bring a smile to your face.

Tadpole Treble is not the longest game in the world, with only so many levels. However, its still great to play through each stage multiple times to try and unlock all of the bonuses that Tadpole Treble has to offer. After a little bit, you meat a giant bullfrog that will offer you bonuses based on how many bubbles that you bring him. Some of these are basic bestiaries that will show you the various enemies in the way, while another is the Music Player, which lets you listen to each of the melodious tones throughout the game. Its a neat, though slightly uneventful way to keep players playing, even after they make their way back home. There’s also medals to unlock as you get better, as well as special flies that are hidden carefully, only unlocked after you play the game a certain way, such as hitting all the bamboo shoots in a particular level.

And for those that like to create music, or would like to try their hand at creating their own masterpiece, you are most certainly in luck. In Tadpole Treble, there is a comprehensive song and level creator that allows you to make whatever songs that you would like. Its hearkens back to what was offered in Mario Paint way back in the day, so anyone who remembers that gem fondly will fall right at home in Tadpole Treble’s level creator. You can also share the levels that you create, so that there can be more of the fun.

My complaints for Tadpole Treble are minor, but have to be stated. Occasionally the game feels a bit cheap where they lay bubbles, forcing you to take a hit in order to get it in your system. This, however, does not happen too often, and doesn’t take much away unless you want to complete the game in its entirety. The only other issue that I had with Tadpole Treble is that the game can be a bit too bright at points. Some levels,(the second one for example) the main background is white, making it a bit hard to see where everything is if there is any glare on the screen. Once you figure out a way to block any additional light, the game runs smoothly,  even at the highest graphical setting and is fine from that point on.

Tadpole Treble was clearly created with love and attention, and anyone who even remotely likes musical games or graphics that look both cartoony and nostalgic need to spend the ten dollars this game is set at. It set out to be a fun game that makes you feel young again, and I hope that it succeeds everywhere it can.

Full disclosure: This review is based on a review copy of Tadpole Treble given to HeyPoorPlayer by the publisher 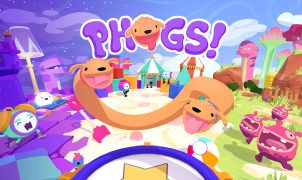