Class is Back in Session Way back in December of last year I wrote my review on the first chapter of Falcom’s Legend of Heroes: Trails of Cold Steel.  It was a title that I felt was a great step forward in the studio’s already impressive portfolio of works, and I ended up investing a significant amount of time into it.  While during my review I had admittedly only scratched the surface of the game, throughout the next few months I ended up logging close to 120 hours with it before finally reaching the long awaited ending, and I was beyond ready for more.  Today, XSEED has released The Legend of Heroes: Trails of Cold Steel Part II, and I am happy to say that it is every bit the sequel that I was hoping it would be, and then some.  Do take note that this review will make mention of story elements from the first part of the game to provide context.  If you have not played it I strongly suggest you give it a go before you delve into this next chapter of the story.  While there is a backstory option to help catch players up on what happened during the events of part I, it is a far more satisfying experience to go through the game personally.  I’ll touch more on that later.

At the end of Legend of Heroes: Trails of Cold Steel Part I, The Erebonian Empire was on the brink of war.  After months of mounting political tensions, the state of Crossbell, located in the Erebonian Empire, declared its independence and made a show of force by using an unknown weapon of mass destruction to take out the Empire’s massive Garellia Fortress.  Chancellor Gilliath Osborne, the Prime Minister of the Empire, was assassinated directly after making a declaration of war in response.  On top of all this, the noble faction revealed the fruit of their machinations in the form of a giant airship carrying giant humanoid mecha called Panzer Soldats and proceeded to invade Heimdallr, the Empire’s capital, as well as Trista and Thors Military Academy. Rean awakened his powers and gained the ability to summon and control a mecha of his own, the Divine Knight Valimar the Ashen.  “C” of the Imperial Liberation front had one of his own Divine Knights, however, and made short work of Rean despite his best efforts.  With Valimar making the cold, but necessary call to take Rean and fly far away to safety, leaving all his friends behind, the game picks right up where that cliffhanger of an ending left us off. Rean awakens what seems like a short while later on top of a depressingly barren mountain range.  You have no idea where you are, what happened, or even how much time has passed since the end of Part I.  All you have to go on is Valimar quietly slumbering behind you, and a certain peculiar feline watching over you.  After venturing down the mountain trail and getting your bearings, you run into a familiar town with some familiar faces.  After getting into a seemingly unwinnable boss fight with a huge monster, that is.  It’s here that the story really begins, and Rean has to come to terms with just what has transpired during his absence and gather the strength to venture out and find his missing and scattered comrades.  Based on the series of events that follow shortly after arriving home, it’s going to be anything but simple and easy.  To put things into perspective, I spent 4 hours on the prologue alone.

It’s clear right from the start that the game is already a big improvement over the original.  There were some tiled textures scattered throughout the environment that hindered the overall appearance of the environments in Part I, but that isn’t the case here.  The scenery in this game is gorgeous.  The rocky textures of the mountains with the rolling clouds in the background look natural and picturesque, and the environment noticeably changes as you descend down the mountain trail, with more grass and foliage appearing as you get closer to your initial destination.  This is also only the first area of the game.  Upon reaching Rean’s hometown you’re treated to a quiet, snow covered mountain village, with lots of little attractions and details that really give it a “lived-in” sort of feel.  Not only do the visual textures look better, many of the “clunky” animations from the first game that looked stiff and out of place look far better now.  Most notably Rean’s run cycle.  It’s not quite on-par with something like motion capture, and there are still some unfortunate issues with hair clipping through some characters’ bodies, but little touches like these that had some attention turned their way and were fixed really go a long way in showing the amount of care that went into making this sequel. Gameplay remains largely unchanged, aside from some minor user interface changes to menus, as well as some new twists to combat to freshen up battles.  Exploration still has you going from area to area based on what chapter of the story you’re in, at least initially.  New modes of travel also open up to you as progress theough the game.  Combat is still turn based, and you use the Trails series staple “Quartz” system to use magic and power up your characters.  Perhaps the biggest change to this game with the gameplay is what was found at the very end of the first.  “Divine Knight” battles are now a staple from early on in the game.  In these, you pilot your Gundam/Xenogears/Evangelion hybrid mecha and duke it out with other giant monsters/mecha.  These battles are pretty high stakes, in that much of the battle is initially a guessing game in trying to find your opponent’s weak spots and exploit them before they find yours and deal heavy damage to you.  They can at first be a little frustrating, but when you get the hang of them they’re a lot of fun to play, and provide a nice twist to the standard turn based combat that the rest of the game utilizes.

While some familiar tunes return (for instance, the mini-boss theme that plays upon opening a red spiky chest), much of the music here is fresh and new.  In classic Falcom style, they deliver every musical note in the best way they can.  The overall feeling of the game presents a sense of uneasiness, loneliness, and is very somber.  Far different from the carefree tone most of the first game carried.  Even the battle theme has a sense of sadness to it.  The tone of the game carries over into this entry’s voice work.  Many of the same voice actors reprise their roles here, and they’re very much on their A-game, just as they were the first time around. The script and story, just as in other Trails games, is again the best feature in this story.  Falcom has some master-class writers behind this series, and XSeed’s localization work really makes the series shine.  Characters really feel alive and diverse in their personalities, and that shines through in their interactions with one another.  The overlying theme of this game is that there’s a full-scale war tearing the Empire apart, and everyone is on edge or torn between their allegiances and personal beliefs.  The original story was endearing and fascinating to behold, with the main class developing their bonds with one another and even the minor characters managing to hold my interest.  Even more interesting was the constant stream of twists and turns where characters who you thought wouldn’t play a big role ended up being far more than what appearances suggest.  That carries over here, especially with the new members added to the cast.  Overall, the characters and the story are what make this series what it is.  It absolutely has to be experienced firsthand rather than reading up a plot summary.

Though it still has some minor quirks, The Legend of Heroes: Trails of Cold Steel II is a big step up from the previous chapter in the large political drama surrounding the land of Erebonia. What I have experienced is nothing short of amazing work on both Falcom’s and XSEED’s part. Whether you own a PlayStation 3, a Vita, or both (this game also supports Cross Saves), you owe it to yourself to give this series a look.  As mentioned earlier, do check out the first part of the story before diving into this one.  It will give you a far greater appreciation for the story if you do.

“Full disclosure: This review is based on a review copy of  The Legend of Heroes: Trails of Cold Steel II for PS3 given to HeyPoorPlayer by XSEED Games.” 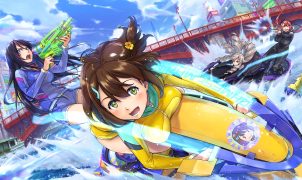 What a Rush     Have you ever been enjoying a game of Mario Kart: Double Dash!! and found yourself saying “man, I really like this game, but I wish…