Games that kick you when you’re down! The game over screen serves a simple purpose: to establish that you’ve failed, and to provide you the option to try again. Most games don’t rub it in too much when you bite the bullet, but some have no problems shoving your face in the dirt. Whether it’s giving you a true measure of the gravity of your failure, or simply by having a jolly amusing laugh at your expense, some games just go the extra mile.

I’ve decided not to include some more obvious entries like the Arkham series where a rogue’s gallery of villians lambast your demise, or the famously pained cries of the Metal Gear Solid game overs. This is a more personal list, hopefully including some titles you might not have expected. And yes: a shocking number of these entries are from the nineties. I suppose hearing Hanson on the radio constantly, and waiting for teeth-gnashingly slow dial-up modems to start must have made the games designers of the day extra sadistic! You remember the Lawnmower Man, don’t you? Pierce Brosnan plays a scientist who accidentally makes a Dunguree-wearing simpleton named Job into a virtual-reality conquering mastermind. It was based on a Stephen King story, but the author loathed the film so much, he refused to have his name put to it. There were two games made from the Lawnmover Man movie. The second was Cyberwar, where you’re cast as a silver-skinned virtual reality avatar of Pierce Bronhom, trying to stop Job from causing chaos in the virtual world.

There’s absoloutely no expense spared in the epic game over cutscene – where you’re quite literally sent to hell. Once you’ve used up all your lives, you appear on a dusty windswept plain, with Job pointing towards a grim, imposing tower. Your once silver skin has turned red as you’re forced to walk towards the tower – and down into a dungeon. Vile groans echo through the corridors; freakish hands grabbing at you from inside cages; chained-up skeletons festooning the walls. Finally you descend to the deepest part of the dungeon: a bone-laden pit. The camera shakes as it views your character, and a bestial growling can be heard, as if you’re watching yourself from the viewpoint of some unseen, nightmarish creature. The last thing you see is your eye opening in abject terror as the creature charges towards you – likely just the first agonizing experience in what is sure to be an eternity of cyber-torment.

Though Cyberwar is otherwise a forgettable movie tie-in, it’s one of the few games that really pull out all the stops in making you feel bloody awful for failing!

9. I have No Mouth and I Must Scream

With a name like that, would you believe it has a cruel game over screen? I Have No Mouth and I Must Scream was a point-n-click despair-em-up based on a classic short story – written in a single night by the charmingly misanthropic Harlan Ellisson – where civilization has been wiped out by an insane, hateful supercomputer named AM (voice acted by Ellisson himself). Only five humans remain – kept alive by AM for his twisted amusement so he can torture and torment them endlessly.

The game over is true to the short stories’ description of of AM’s ultimate revenge. Your character is transmogrified into a armless, legless, senseless, jelly-like being – forced to live an eternity of blindly oozing across a barren wasteland: trapped in its own painful, regretful thoughts.

Believe it or not, the game is actually significantly more positive and life-affirming than the short story! At least there’s a possibility for a “good ending” in the interactive version of I Have no Mouth and I Must Scream – whereas jellyfication is the canonical fate of the last surviving character in the original story. We can only assume Harlan Ellison must have mellowed slightly in the intervening years to at least offer the prospect of a light at the end of the tunnel! 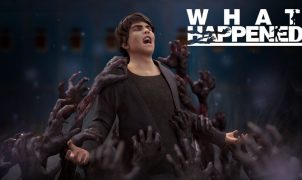 No, seriously. What Happened?     Developed by indie studio Genius Slackers, What Happened tells the story of Stiles, a high school student dealing with some heavy baggage. Plagued…