Copy Kitty: When you don’t realize the pun until you’re partially finished with planning the review.

Note: This review is based on an Early Access copy of the game; if you purchase this game after it gets out of early access, this may not be the most accurate to the final product.

You know, I don’t know if I can go back. I’ve tried, but it just isn’t the same; everything feels slower, and doesn’t challenge me as much as it used to.

Either I’ve become a gaming giant with reflexes of steel between this, Necropolis, and 10 Second Ninja X, or Copy Kitty might be one of those games that kicks you in the teeth, short-circuits your senses, and forces you to use all of your reflexes (and even some you didn’t think you had) to get through in one piece.

The fact that it’s good is a plus, too. 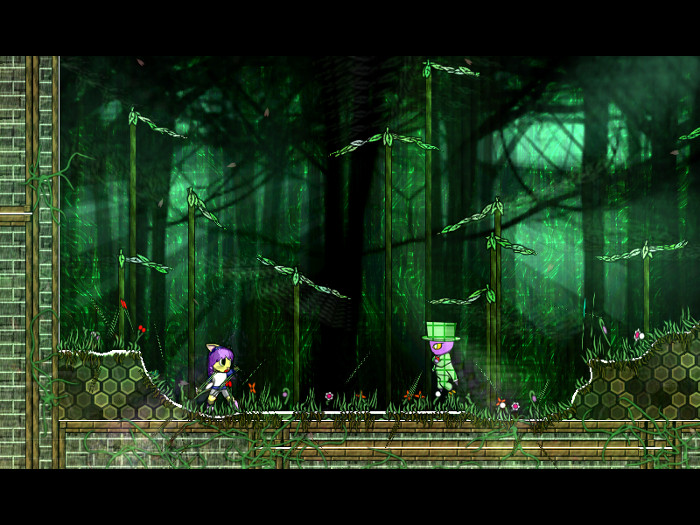 Copy Kitty is a 2-D platformer developed by Nuclear Strawberry and released on Itch.io a few years ago. After some time and plenty of tweaks, it was tossed onto the Steam Store for nine bucks, albeit in the early access stage. On the surface, it looks like another anime-inspired Mega Man clone in the vein of Mighty No. 9 and Rosenkreuzstilette, and to an extent, it’s not wrong. You jump and shoot just like the Blue Bomber, you collect weapons from enemies, and you go through different-themed stages and take down a boss at the end.

This is about where the similarities end, though. Copy Kitty‘s core gimmick is that you’re able to use three weapons at a time, and combine the attributes of all the weapons in your inventory to create a giant super-weapon, whose uses range from more utilitarian to the absolute destruction of everything on-screen. Nearly all enemies drop abilities, power-ups, or elemental amulets; from basic mooks to bosses, and while there are certainly a lot of abilities lying around and plenty of combinations, it never feels overwhelming. The system encourages you to experiment, and while you may have your mainstays, you’ll need to keep switching weapons and seeing what works in order to get through the game’s many stages. 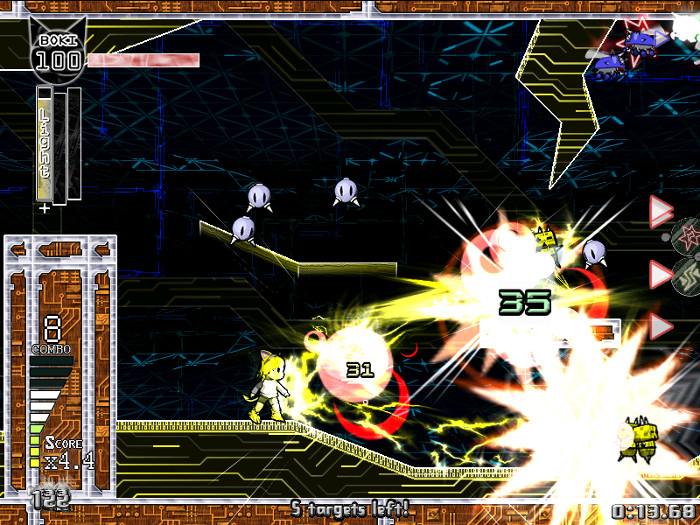 …Yeah, the game’s hard. That comes with the territory, though, doesn’t it? It’s at least a rule in the unwritten “Mega Man-inspired game development guide”, though in a lot of cases this is brought about by bad level design and cheap deaths. In Copy Kitty‘s case, it’s more about enemy placement, weapon usage, and the need for quick reflexes. Nothing feels like it’s the game’s fault, but rather that you didn’t ‘Git Gud’ as so many like to say. Obviously, this is not a good game for beginners to the genre. The difficulty sits at a good place and only keeps going up throughout the game, with the occasional easy level thrown in for good measure. Bosses are large, intimidating, and will usually take a try or two to figure out and beat, at least for mid-level veterans of the genre. Beginners will likely throw their controllers with frustration, and experts will feel right at home.

Experts (or just Mega Man Zero fans) will also feel right at home with how this game is almost designed around pushing your skills to the absolute limit. The story mode has multiple worlds, each broken up in 9 – 15 individual missions, where you aim to complete your goal in an allotted time, and reach for the high score. The Marathon mode is like a survival test, with randomly-designed layouts and as many enemies the game can throw at you, until you can’t handle any more abuse.

Thankfully, all of this is brought together by buttery-smooth controls, though they may take some getting used to for those used to the Blue Bomber’s linear blaster and simple setup. How you play depends on which character you select: the default character, Boki, controls like if Mega Man decided to use multiple weapons at once, shoot in eight directions, kick things, and use a dodge roll. The second character, Savant, controls more like if a Shmup decided to swallow a platformer, with a shield and teleport instead of a dodge roll. Regardless of which character you pick, the controls don’t lag and are as tight as they need to be. The lack of frame drops and performance issues helps, too.

Copy Kitty is, on the whole, a game that I can’t recommend enough. It’s not necessarily perfect, but it’s a bucket of fun and should be in every platformer fan’s Steam Library. Even though it’s still in early access, you owe it to yourself to give it a go, or at least show it to a friend who might be into this sort of thing.

I have a few quibbles, sure, but after that borderline marriage proposal, they almost feel quaint: the artwork isn’t anything to write home about (though the writing has plenty of charm, and more to spare), and the soundtrack can get grating after a while. Since Copy Kitty encourages multiple playthroughs, it’s best to mute the sound and play your favorite MP3s using a separate program to get the blood pumping, because the repetitive, generic techno tunes aren’t going to do it here.

Still, that’s a pretty low bar for quibbles. Music and presentation are negligible when a game controls this well, and feels this good to play. This has given me some of the most fun I’ve had playing platformers in years, and I’m glad it’s here. Copy Kitty is an inexpensive, fun little game that is worth every penny.

The Detail Episode 3 – Devil in the Detail Review…