Let it not be said that the game-buying crowd is unable to work themselves into a fever pitch over the products they consume. Sure, there’s been hype for games before, but not quite like the lead-up to No Man’s Sky, British developer Hello Games’ space explore-em-up. All folks needed was the number of planets: Eighteen quintillion — that’s eighteen with eighteen zeros — and they were off to the races. Consumers were ready to promise themselves, each other, and anybody else who would listen that this would be the ur-game. The public would never need to buy, play, or look at another video game after No Man’s Sky. This was it; the pinnacle of human achievement vis-a-vis digital entertainment. I could gush for thousands of words about how much I’ve wanted to play a game like this since I was a child, about the sense of wonder I got playing games like Wing Commander and Freelancer, about the amount of time I’ve spent pouring over libraries’ worth of information about space, astrophysics, and cosmology. The late Carl Sagan is one of my personal heroes, for what that’s worth.

As it turns out, maybe fans were deluding themselves a bit.

In reality, No Man’s Sky is your typical crafting, survival, and exploration game — think something akin to 3-dimensional Starbound — with everything that entails. You’re gathering resources to craft items to survive longer so you can gather more resources and craft more items to survive longer. It’s a gameplay loop which has worked so well for so many games, in part because the loop between gathering a resource and turning it into something useful is so short. You’re mining things like aluminum, copper, zinc, iron, and carbon (among other fictional elements) and turning them into more advanced resources like fuel, mining laser energy, and upgrades for your ship, suit, and multi-tool. It’s a simple gameplay loop, which is why it’s so satisfying. No Man’s Sky has four pillars of mechanics: Fight, Trade, Explore, and Survive. Explore and Survive are intrinsically tied to gathering and crafting, but what of the other two? Fighting is perhaps its weakest pillar. The on-foot shooter moments are not satisfying because your multi-tool’s “boltcaster” feels like a wet pool noodle, and the ship-to-ship combat is too simplistic to be fulfilling. It’s somewhat disappointing, because one of the major draws originally was that this was Freespace writ large. Not so. The fourth pillar, trading is extremely simple: you buy low in systems ostensibly with an abundance of a resource, and truck said resource to another system with a scarcity of that resource and sell it for a profit. Even survival is a pretty hollow, unsatisfying affair, as every single hazard — heat, cold, radiation, and toxic exposure — can be handled in literally the exact same way: Recharge your life support and suit hazard protection with isotope elements and oxide elements, respectively.

Fighting and trading are perhaps too shallow for their own good, but for somebody like myself who just wants to see what there is to see, exploring is the main draw here. I very much enjoyed warping into a new system, looking around at the planets, picking out whichever one looked interesting, and flying to it. I found ocean worlds, desert worlds, and even a few “garden” worlds. In one system, I made planetfall on an irradiated, heat-stricken “forsaken world,” realized there was nothing for me there, then scooted over to a nearby cold planet rich in resources and flora/fauna. The variety between planet types, while feeling very mechanical, is wild.

My biggest gripe with No Man’s Sky is two-fold. The first is that in a universe teeming with life, you feel alone. Every alien you encounter is part of a larger race, but that’s never represented in any meaningful way that I could see. There are no cities, no civilized planets, no large structures to speak of except for space stations, all of which, by the way, share an identical layout. You never feel like you’re part of anything other than a huge toybox with eighteen quintillion toys. Perhaps in the future, Hello Games will address this (because I’m sure they’re aware that it’s a problem), but right now, in a product on release, it’s a glaring omission in a universe which otherwise feels organic and awe-inspiring. The second is a point I sort of addressed before: All of the architecture is the same. All of it. There is zero differentiation between the space stations of the Korvax (a hivemind collective of androids obsessed with knowledge) and those of the Gek (a race of sentient amphibians with a proclivity for trade and science — think Salarians from Mass Effect but frogs instead of lizards). It’s maddening to me that any sense of discovery I got in my first few hours was all that there was. Now, every time I go into a space station, I know exactly where to go and for what. This should not be.

A final note, on the PS4 version specifically: It’s very pretty, and runs at a minimum of a stable 30 frames per second, but the texture pop-in when exploring planets is extremely noticeable and jarring, and there is very apparent aliasing on nearly every hand-built texture (space stations, NPC models, etc). I’m not kidding when I say that the planets don’t even fully finish loading until you’re close enough to Randy Johnson an alien bird. The PC version will probably see improvements to this, and will hopefully look and run better, but as it’s not out until Friday, there’s no way to know for sure. I want to say that No Man’s Sky could have had it all, and that maybe someday it will, but I’m not sure the things I want out of it are feasible or even possible. What is there — fun exploration, varied planetary environments, and a solid loot/craft/upgrade gameplay loop — entertained me for my thirty-odd hours with the game, and will likely continue to entertain me for several dozen more to come, but it’s hard to come away from the whole experience feeling anything other than emptiness. If you think just exploring new and untouched worlds will entertain you, No Man’s Sky might just be worth the admission price of $60. Otherwise, there are better experiences of the genre to be had elsewhere. 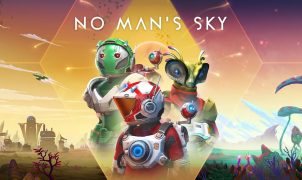 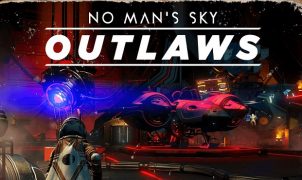