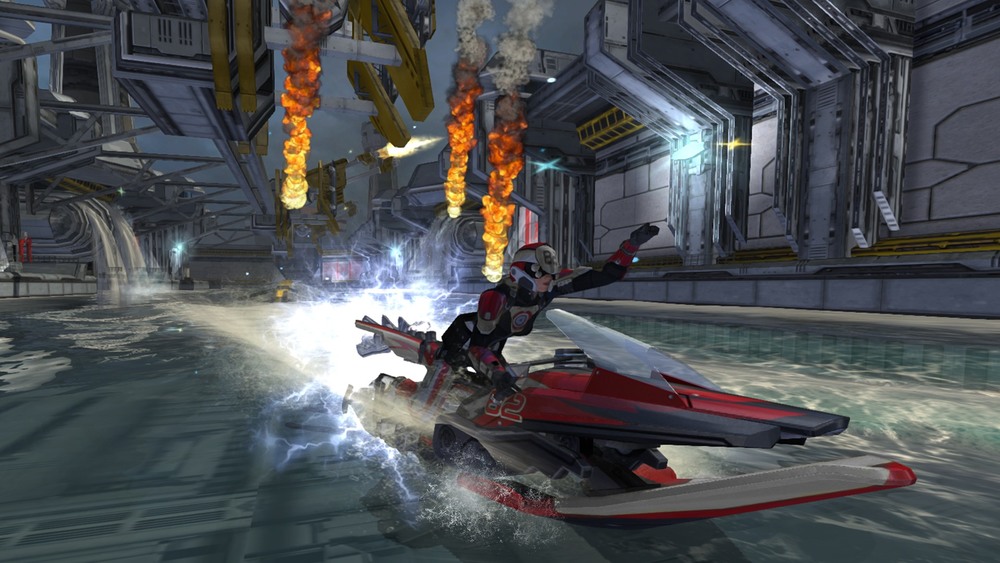 As mentioned in my Obliteracers review, I love all things racing.  This includes Jet Ski racing, although I have never partaken in it personally.  My experiences with it have unfortunately been limited to the digital world.  Games like Jet Moto and Wave Race 64 were a blast to play growing up, and I always welcome new entries to the genre (or sub-genre, if you will), especially if they are done well. Fortunately, game developer Vector Unit is very well versed in the world of watercraft racing games, being the creative minds behind titles such as Hydro Thunder Fury and Hydro Thunder Hurricane.  Their newest entry in their Riptide GP franchise, Riptide GP: Renegade, seeks to bring their expertise to the PS4 and Steam.  Where the original Riptide GP was designed around mobile hardware, Riptide GP: Renegade has been designed from the ground up as a home console and PC experience, and it shows through very well.

The first thing that you’ll notice upon starting up Riptide GP: Renegade is that it actually has a story.  Games like Midnight Club and Need for Speed usually have loose, rudimentary stories, but they’re certainly not the norm.  In Riptide GP: Renegade, you start the game as either Impact (male racer) or Poison (female racer).  He or she gets set up by fellow racer and professional douche Krex in an unsanctioned race that gets busted by the future police, with you taking the fall and getting sent to prison for two years.  When you finally get out, you’re swept right up into the underground racing circuit in an effort to clear your name and reclaim your place in the sanctioned racing league.  It’s admittedly clichéd and still fairly basic, but it is a nice element to see in a racing game nonetheless.  Aside from your two starting characters, there are plenty more to unlock over the course of the game, usually through beating a “boss” character in a race.  Each character has their own personality and gestures they perform, which really helps the characters feel more alive and less like cardboard cutouts while racing to liven the game up. 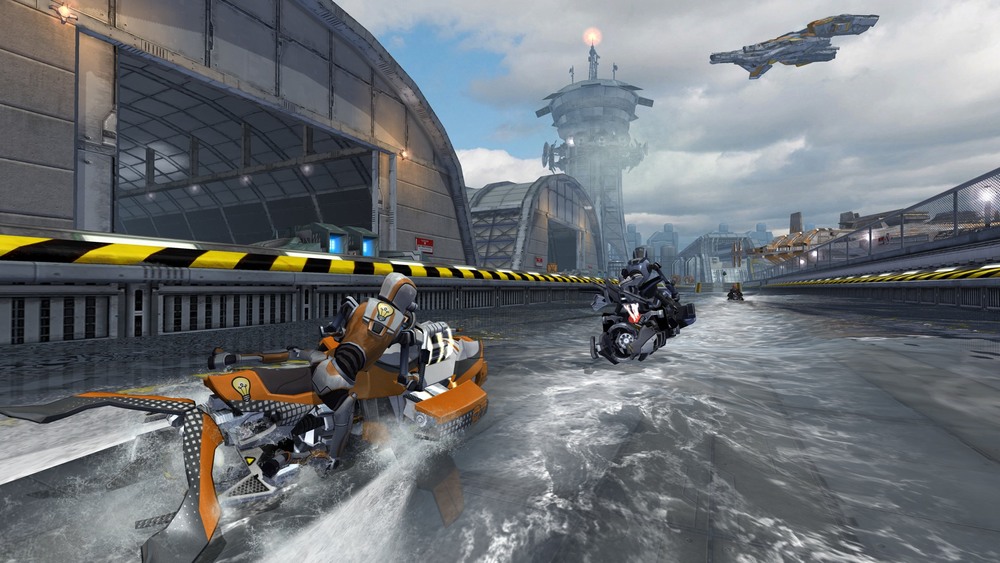 In a similar fashion to Jet Moto, Riptide GP: Renegade takes watercraft racing and puts a futuristic spin on it.  Racers take part in either single player mode, 2-4 player split screen multiplayer, or 8-player online race modes will find themselves racing through various futuristic landscapes including waterways in large metropolitan areas and rundown dystopian ruins.  Races mostly take place on water, although there are the occasional environmental ramps, obstacles, and juts through seemingly populated areas to keep things from feeling monotonous.  The environments are colorful and varied enough to hold your visual interest while having just enough detail to not be too distracting when zooming by at high speed.  Even so, they still look great and show plenty of polish, especially with the game running in 1080p and 60 frames per second, even in split screen mode.  The watercrafts and racers themselves also look great.  Both have all sorts of mechanical and textured details that really flesh them out and the water looks and behaves exactly as it should, including water droplets splashing onto the screen when you splash through waves.  Though everything looks and feels great, the character models due tend to suffer from some stiff animations here and there.  Fortunately, the game is so fast paced those issues typically aren’t that noticeable.

Race types are your typical assortment when it comes to watercraft racing.  Standard races where you have to aim to place first are most of the races you’ll encounter during your time with the game.  There are also buoy races where you have to slalom through each marker in order to pass the race, which adds a degree of difficulty to the already fast paced tracks.  Additionally, Riptide GP: Renegade capitalizes on your character going “underground” and also adds in police chases where you have to avoid capture by racing through the level and avoiding obstacles already in place on the tracks as well as the police themselves.  This is a nice touch which not only adds a gameplay mode one might not expect to find in a game about racing Jet Skis but also a bit of story depth as well.  In addition to the career mode, there is the aforementioned on and offline multiplayer, a challenge mode with available leaderboards for the competitive types, and quick races for those who just want some practice or a quick bit of fun with a friend. 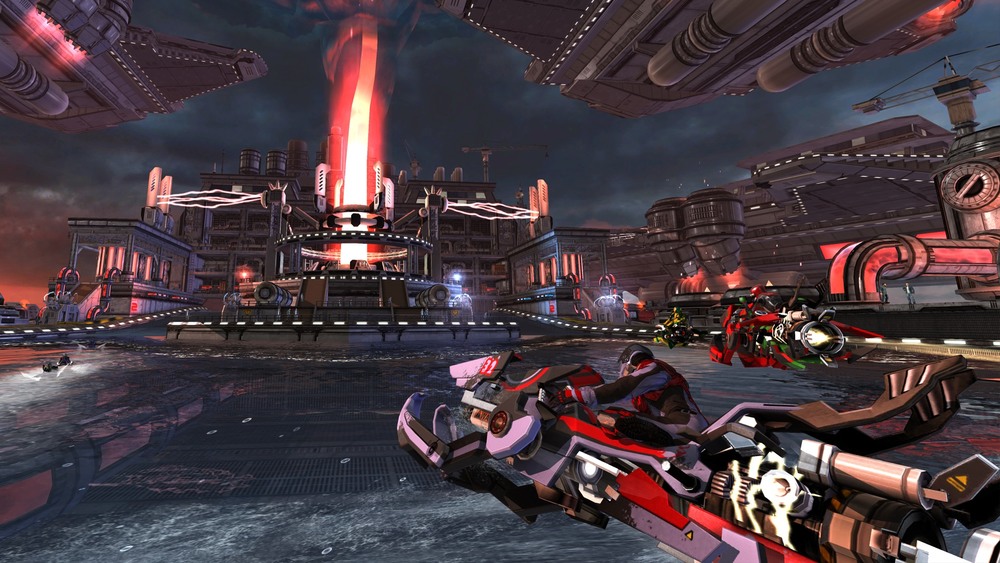 In addition to featuring multiple styles of play, Riptide GP: Renegade also features a robust upgrade system.  Players earn credits and experience that levels them up.  Players can use these credits to upgrade their watercraft’s acceleration, top speed, handling, and the amount of boost you can use.  The controls are already tight and spot-on at the start of the game, and these upgrades make your craft exponentially better the more you apply them.  You can also buy additional stylish moves that your racer can pull off through the skill points you get each level up.  These are typically pulled off by moving the analog sticks in the same or different directions, and are used to fill your boost gauge up.  New moves and abilities are unlocked as you gain more levels, so grinding a bit and stocking up on skill points and buying moves with them can really pay off.  Fortunately, there isn’t much grinding necessary to make your racer more competitive.  Credits and experience awarded for each race are pretty generous so as not to hamper your career based experience.

Music can add a lot to the atmosphere of a racing game.  Games like Midnight Club II and Wipeout, which feature amazing soundtracks are part of the reason I like those games so much.  Riptide GP: Renegade strikes another high point by having an excellent soundtrack attached to it.  Races are accompanied by high paced Drum and Bass beats, as well some Electronica and Trance tracks sprinkled in here and there.  The musical choices really fit with the high energy, competitive nature of the game, and add greatly to the game’s already high fun factor.

In all, Riptide GP: Renegade is an expertly constructed game in a sub-genre not exactly at the forefront of racing games.  It’s got some minor flaws here and there, but given its cheap price the overall quality far surpasses any minor flaws the game might have.  It should serve as a welcome addition to anyone’s device looking for an exciting racing experience, and I definitely recommend you check it out.  You’d be hard pressed to be disappointed with this game.

“Full disclosure: This review is based on a review copy of Riptide GP: Renegade for PS4 given to HeyPoorPlayer by Vector Unit.”

Adol Christin’s latest adventure is one of his best yet When it comes to action RPGs, very few have been around quite as long as Nihon Falcom’s Ys franchise.…