Prepare For Despair in Two Languages 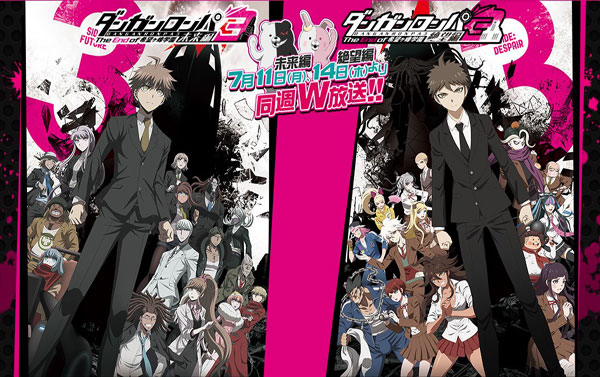 Funimation has announced its voice cast for the broadcast dub of the Danganronpa 3: End of Hope’s Peak Academy anime.

For those unaware, Funimation’s broadcast dubs are a fairly recent service where they dub select animes a few weeks after they air in Japan.

For the Despair Arc Funimation brought back the voice cast from the recent Danganronpa the Animation dub, which had a voice cast different from the game’s English dub to reprise the roles of Makoto Naegi, Kyoko Kirigiri, Aoi, Asahina, Hagakure, and Monokuma. Strangely the Future Arc dub features Kanji Tang, who voiced Hagakure in the original game and Erin Fitzgerald, who voiced both Toko Fukawa and Junko Enoshima in the games in roles of Kochi Kitamura and Seiko Kimura respectively.

The previous dub Funimation made for Danganronpa the Animation was poorly received by fans and only featured one returning voice actor from the games: Bryce Pappenbrook as the protagonist Makoto Naegi.

Funimation appears to have learned from it’s past mistake however and brought back most of the Danganronpa 2 voice cast for its’s dub of the Despair Arc. Nearly all voice actors from Danganronpa 2 reprise their roles in the anime with the exception of Fuyuhiko Kuzaryu, Ibuki Mioda, Akane Owari, Peko Pekoyama, and Gundam Tanaka, who are being voiced by Aaron Dismuke (Alphonse in Fullmetal Alchemist), Brienna Palencia (Mad Moxxi in the Borderlands games), Morgan Garret (Rico in Attack on Titan), Claire Harp (China in Hetalia), and Scott Frerich (better known as Team Four Star’s KaiserNeko) respectively. Characters from the Future Arc also reprise their roles in the Despair arc.

You can read the full casting for both parts Here

The Future arc dub premieres August 10th as part of Funimation’s Dubble talk segment (which also features the english dub for the Tales of Zesteria anime) while the Despair Arc premieres August 11th; the day afterwards.

Danganronpa 3: End of Hope’s Peak Academy is a two part anime project that concludes the storyline started in the first game: Trigger Happy Havoc. The Future Arc follows Makoto Naegi as he is being tried for treason by the Future Foundation after the events of Danganronpa 2. The trial goes awry when Monokuma traps everyone and forces them into one final killing game. The Despair Arc follows the cast of Danganronpa 2 prior to the events of the games.

What do you think of the voice picks? Let us know in the comments bellow.