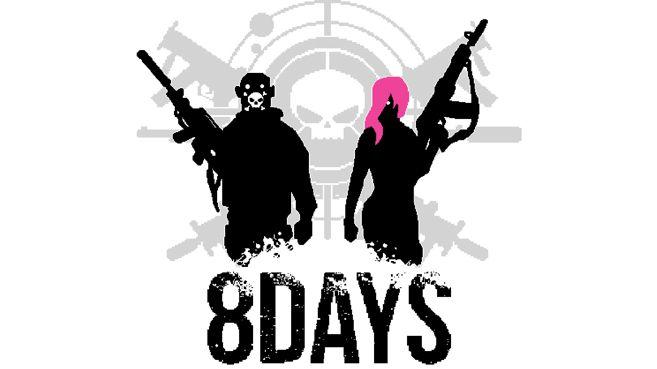 I don’t know the first thing about being a mercenary, but it must be pretty hard. You essentially live a kill-or-be-killed lifestyle, always pointing your gun at someone while making sure that no one pointing one at you. Your personality, your hopes, your dreams, and anything of the sort are all but meaningless; as a mercenary the only thing that truly matters is your usefulness as a hired gun, and when that skill set finally becomes unusable for some reason or another, you’re essentially as good as dead. Perhaps worst of all is the fact that, as a mercenary, you’re essentially just a glorified tool. No one really cares about you when you’re alive, and they certainly care even less (if that’s even possible) when you’re dead. Being a mercenary sounds pretty dreadful, and I’m sure most people wouldn’t wish that lifestyle on anyone. There is, however, one place where being a mercenary is acceptable and, if I may say so, even pretty darn cool; the video game world. And, wouldn’t you know it, that’s what 8DAYS is all about!

The story behind 8DAYS is pretty short and sweet. As a member G.O.D. (Gold, Oil, and Diamonds), an elite organization of “peacekeepers”, your job is to use “diplomacy” to “peacefully resolve” problems for your clients… at least, that’s what the media will have people thinking. In all reality, G.O.D. is nothing more than a high-status band of mercenaries, selling their skills to the highest bidder and killing anyone needed in order to make a profit. Though quite a skilled and knowledgeable G.O.D. mercenary yourself, the G.O.D. Chairman one day catches wind that you might be a little too skilled… that you just might know a little too much. And, hey, he can’t have someone like you running around now can he? Things would be a lot easier for him if you were out of the picture. Unfortunately for him, you don’t have any intention of dying or, if you do die, staying dead. 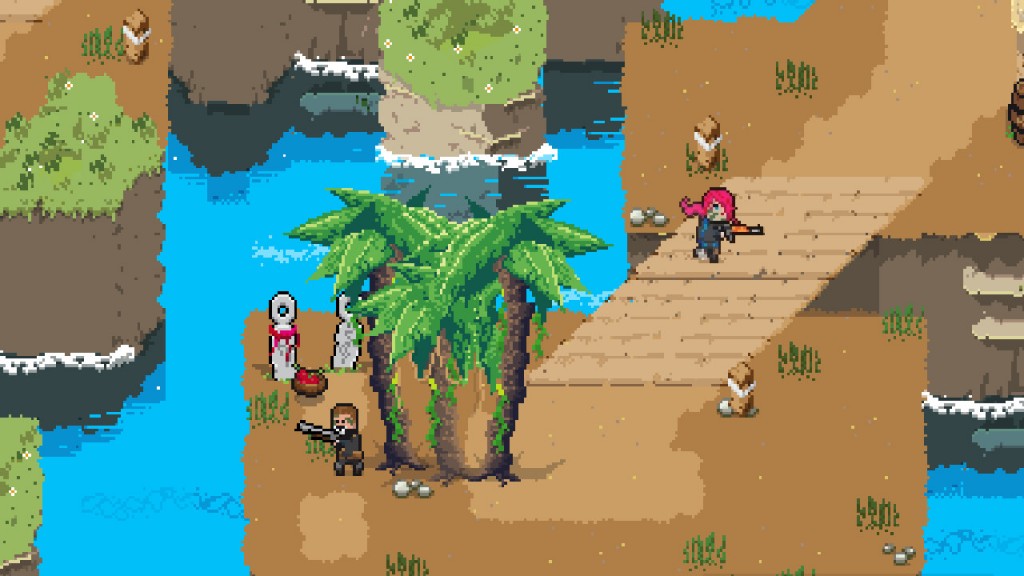 No time to take in the tropical sights when there are bad guys to kill!

8DAYS is a retro-inspired twin-stick shooter to its very core and mainly focuses on taking down any and all enemies in your path, although it isn’t as mindless as you may think. Many of the areas within the game have stealth-like elements to them, requiring players to plan out their assault as opposed to blindly running into each and every room while firing wildly. Even in the beginning of the game, there are only but a few areas in which you could get away with that kind of thing. Areas also, more often than not, allows players to play around with hit-and-run tactics. As important as waiting for an enemy to walk into your line of fire is, sometimes you’re going to have to go for them. Of course, being the retro-inspired game that it is, when one enemy in 8DAYS sees you, pretty much every enemy within the entire area will know where you are. If you’re not careful, that can (and most likely will) get you killed. Several times. Fortunately, you can generally use your surroundings to shake enemies off of your trail and take yourself off of “high alert” mode. While it can be a bit difficult here and there to figure out what does and does not exactly work when it comes to employing stealth tactics within 8DAYS, the level layouts are generally fair enough to allow for some sort of out no matter where you are (providing that you’re quick enough).

While stealth segments are relatively commonplace throughout a decent majority of the game the overall tone of 8DAYS changes a bit about 2/3rds of the way through, and the game adopts a style that focuses quite a bit less on hiding and a bit more on getting good at shooting enemies while avoiding being shot. The change itself is a bit unexpected, and occurs after a very strange event that involves a Samurai Ghost (I won’t get any further into that for the sake of spoilers), but it surprisingly doesn’t put a damper on things at all. In fact, as good as the game is in its entirety, I would almost say that the last section of 8DAYS is where the game really shines. Pre-Samurai-Ghost-Event, the game didn’t showcase intense combat a whole lot. Too often I would expect an area to allow for some run ‘n gun gameplay, only to become immediately surrounded by enemies, die, and have to take on a more stealth-based approach. As the game advanced, I found myself wanting more and more to be able to roam around a bit more freely and, for lack of a better term, raise some hell. It kind of felt as though the game developers were saying “oh, okay, I guess you’ve had enough stealth. Here’s what you’re after.” It was a very satisfying change overall. 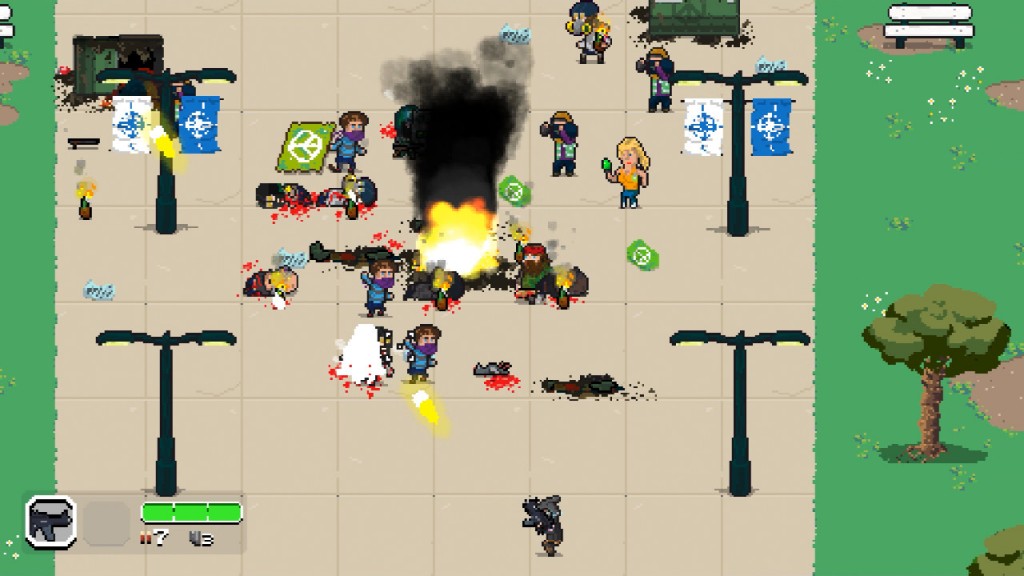 8DAYS’ action gets hot and heavy.

No arcade-style twin-stick shooter would be complete without a slew of boss battles, so don’t be surprised when I tell you that 8DAYS has bosses aplenty. Most levels consist of a miniboss, which shows up around halfway through the level (as expected), and a boss at the end of each level. All-in-all, there isn’t anything negative to say about the boss battles at all; they were difficult, scaled appropriately, and designed in a way that allows players to learn as they lose in order to eventually overcome each boss. In today’s gaming world, a lot of bosses can leave players feeling frustrated, asking “who was in charge of designing such an unfair boss?” Well, that certainly isn’t the case with the bosses of 8DAYS; each loss was nothing more than fuel for my desire to come out victorious. Losses weren’t “what’s wrong with the game”, but “what can I do to become better?” The firm-yet-fair styles in which the bosses are set up are highly reminiscent of older games, and are definitely one of the most enjoyable (albeit somewhat frustrating at times) parts of the game.

I’ve already said that 8DAYS is retro-inspired a few times, but one look at the game and you know that it really goes without saying. Graphically-speaking, 8DAYS is an homage to the earlier days of the home gaming console and it sports a clean pixelated look while still managing to contain within it a nice amount of detail. Levels are quite varied from one another, and each part of the game does a great job of staying vibrant and alive. 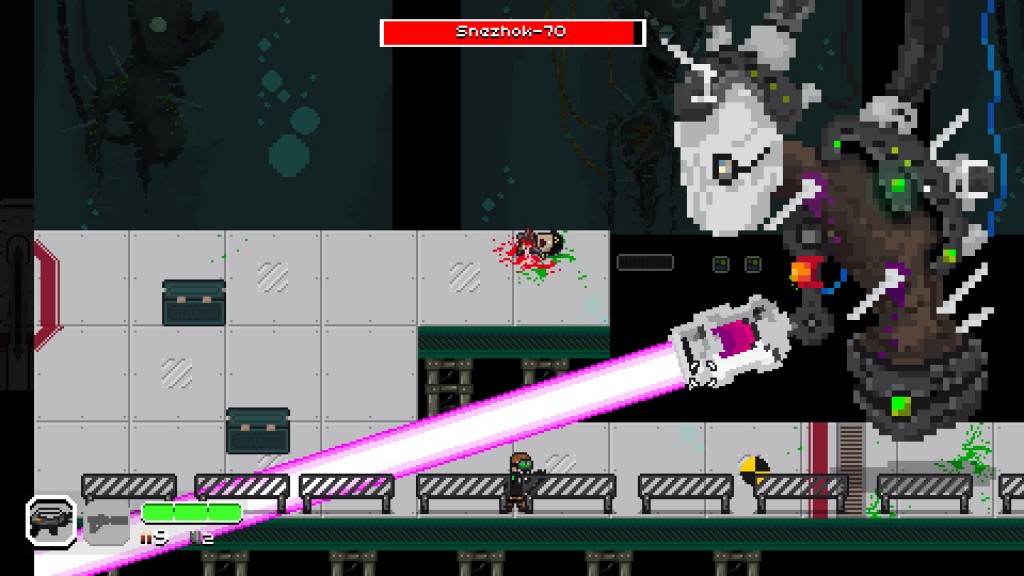 The soundtrack within 8DAYS continues on the path of retro goodness as well. While the game doesn’t have a ton of tracks, it doesn’t need to; 8DAYS is only 5 or so levels long, so it’s obviously not going to have some 100+ song OST. With that being said, every track within 8DAYS is really quite solid and none of them ever dip into the range of mediocrity. The themes largely cater to whatever area you may be in and do so with a catchy chiptune vibe that makes dying a bit less awful because, hey, at least you get to hear that cool song again.

Overall, 8DAYS is a very nice little package and does quite well for itself overall. While it may be a little tough for those not accustomed to twin-stick shooters, the game offers a great challenge for those with more experience and is both challenging and fun. Between a decently-high level of replayability, local co-op functionality, and arcade-style gameplay, 8DAYS is great for those looking for an action-packed adventure in the next game that they play.

Full disclosure: This review is based on a review copy of 8DAYS given to HeyPoorPlayer by the publisher.

Quite an Outing When the review code for Outlast 2 made its way to Hey Poor Player the reactions from the staff were genuinely hilarious. The game was turned…