For a long time now, gaming has been criticized for repeatedly falling back on the zombie trope. Ironically, zombie-themed games refuse to die, but occasionally a title comes along that approaches the topic with a degree of originality and freshness: case in point, Zombie Night Terror.

Zombie Night Terror isn’t about mowing down waves of zombies with a gun, nor is it an open-world survival sandbox game where the undead are among your most lethal predators. Instead, you’re the mastermind behind a zombie outbreak itself, unleashing your abominations upon the world to gradually bring about then apocalypse.

The zombie apocalypse is achieved incrementally by infecting assorted humans and letting them run amok. Infected humans will in turn attack and infect other humans, and before long you’ll have a massive army of ill-coordinated corpses. Unfortunately, the humans appear to have watched plenty of zombie flicks and have armed themselves with guns and melee weapons that make quick work of any potential un-deadly attack. Therefore, understanding which humans to infect first and how to eliminate defended humans becomes a top priority and is one of the primary strategic elements. This is coupled with a limited number of infections conceivable by the player, making it engrossing and thought-provoking yet never frustrating. Shuffling zombies aren’t the brightest tools in the shed and will simply wander back and forth without any intervention. Taking a cue from Lemmings, players are able to manipulate the environment slightly in order to make undead traversal all the more easy. For example, doors can be marked as breakable or staircases can be activated or deactivated as climbable. It’s a tiny degree of micromanagement that adds all sorts of considerations to play style, also opening up the possibility of stranding your zombies or sending them on a suicidal waltz. Regular old zombies are fine and dandy, but you’re gonna have to resort to some creativity in order to eliminate humanity. To maximize your zombification efforts, special zombies with strange mutations and super powers will eventually come under your control. You’ll be able to turn your dead denizens into Spiderman-esque crawlers that scale walls or hulking monstrosities akin to something out of the Resident Evil games. Most interestingly, you can opt to create an overlord which functions as a puppeteer, commanding your hordes and better directing them around the world’s assorted hazards.

Like the best games, Zombie Night Terror keeps throwing curveballs your way every time you think you’ve nailed its mechanics. It continually keeps itself fresh and interesting and never presents a gimmick that’s difficult to understand. Like the proverbial horde, the surprises just keep coming…

Of special mention is the presentation. A rough, bizarrely cute, simplistic pixel style is omnipresent, and it invokes comparisons to other indie titles such as Corporate Lifestyle Simulator. Everything is almost completely unsaturated, save for a few greens and reds (for the blood of course). Music is suitably creepy and the sound effects are spot-on, particularly the Rayman-esque gibberish that plays whenever characters speak. References to zombie flicks are littered throughout, from Dawn of the Dead to Re-Animator and horror aficionados will find a lot to love here. However, the single complaint I have with the game is that occasionally there’s too many things going on in the playing area and it can be difficult to see where exactly individuals are located. Other than that, it’s a nigh-flawless experience.

Zombie Night Terror is one of the best Lemmings-like games to appear in recent years. If you fancy yourself some indie strategy with a touch of dark comedy, this will definitely be one to sink your teeth into. Shuffle on over here to snag your copy post-haste.

Full disclosure: This review is based on a review copy of Zombie Night Terror given to HeyPoorPlayer by the publisher. 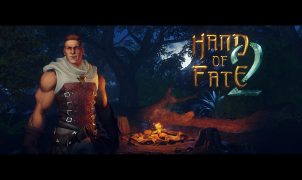 A Fate Gladly Welcomed     My experience with the iconic tabletop role-playing series Dungeons & Dragons, despite being somewhat limited, has been a very positive one overall. Letting yourself…