Graywalkers: Purgatory is a eclectic pastiche of a bit of everything, setting-wise – it’s set in a world where heaven and hell have converged to make a mismatched purgatory world in-between. You can see this right from the title screen where you’ve got a cyberpunk mage; a post-apocalpytic Paladin with a sword and shield made from a street sign; a sexy shade-wearing samurai who seems to be holding a bible in one arm like a preacher; along with a couple generic military-looking white dudes to round things out. The scattershot approach to the tone of the piece continues with the first mission on offer in the pre-alpha demo – where you’re dropped abruptly in front of a party of flaming-sword-wielding demons and told to give them a bloody good thrashing.

What’s there so far is an extremely threadbare X-Com style turn-based strategy. Your team of bad-asses politely take turns and expend a pool of action points to move and take actions. In a nod to a slightly more hardcore audience – some characters have guns which need to be reloaded with a limited number of magazines. Among these characters is one particularly useless character with a pistol that does pathetic damage (and it can’t even be reloaded since pistol clips haven’t been implemented yet). There’s some opportunity for basic strategic ploys. If you position one of your assault-rifle wielding characters so that he’s facing a line of demonic denizens, you can use full-auto fire to blast an opponent, with some of the scattered bullets hitting enemies behind. There’s also the cyber-mage’s fireball attack which does AOE damage across a wide area. She’s also got a remarkably overpowered melee attack called “cheap shot” which directs her blow right at her adversaries’ privates – doing extra damage to males (ouch). When not thwacking demons with his street sign, the paladin can also heal allies. Working together with your parties’ diverse range of skills and be fun and it’s satisfying to lure opponents into kill-zones where you can maximize damage over a group of them.

However, right now there’s not a great deal of complexity. Since ranged enemies haven’t been implemented yet, it’s perfectly viable to just backpedal away from baddies and gun them down. There’s also no cover mechanic or any kind of status effects, which further oversimplifies things. There’s a gentle suggestion that Greywalkers might develop more depth in future, but we’ll just have to wait and see. Right now, calling Graywalkers: Purgatory an RPG is something of a misnomer – as the RPG bit has yet to be implemented. The mission select screens note that there will be a fully functional world map where monsters and ne’er do wells will establish fortresses that will progressively get stronger when you neglect them. I do like the idea of actually roleplaying in this oddly random world and getting a taste of how Graywalker’s all-over-the-bloody-place setting coheres.

One thing that’s definitely worth noticing though, is that Graywalkers: Purgatory has some of the best main menu music I’ve ever heard. Seriously. It’s like the Command and Conquer and Dynasty Warriors soundtracks having a guitar-thrashing rock-off in hell – providing a bad-ass backing to our group of heroes nonchalantly walking away from a giant explosion which they’re too cool to look at.

Since the menu screen is really the most notable part of this title so far, I’ll have to sign off and say that though Graywalkers: Purgatory gives subtle hints of being some grand post-apocalyptic-fantasy party-based turn-based strategy-RPG (and man that’s a lot of hyphenating) – it’s really too early to tell whether it’s worth getting excited about just yet. You can find out more info about this upcoming title at the Graywalkers website. Keep checking HeyPoorPlayer for more news about Graywalkers: Purgatory, and a full review when it cooly walks away from a big explosion and into a full release. 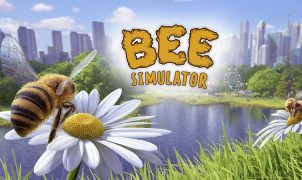