Adult Swim Games today released a new trailer showcasing two-and-a-half minutes of gameplay video for Headlander, developer Double Fine’s upcoming retro-futuristic, side-scrolling, action-adventure game set in a world inspired by 70’s science fiction. The latest trailer offers a fresh glimpse at this bizarre title, which has the player utilizing their rocket-powered noggin in a variety of ways to overcome various obstacles in a quirky sci-fi setting. The latest footage showcases never-before-seen locales including a Moon Base and Power Dome, as well as a few new abilities like the Overclock dash attack and Auto Sentry ability.

The game’s story is set in a world of automation, a doom utopia in which all of humanity have transferred their minds into robotic imposter bodies and are ruled by a deranged computer. It’s an interesting concept, and it makes for some pretty unique situations as the player literally uses their head in unconventional ways progress through the story.

Headlander is currently slated to release in late July on PlayStation 4 and PC. Stay tuned for more details on this funky adventure as they become available.

So, are you having trouble making heads or tails of Double Fine’s upcoming adventure? Be sure to sound off in the comments section and let us know what you think of Headlander so far. 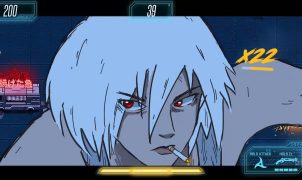