In which Frank gets hacked in real time. Jay “References to Previous Episodes” Petrequin, Francis “Time to make Sounds in the Microphone” DiPersio and Anthony “I Can’t Wait to Look Up Digimon Hentai Later” Spivey come together in the wake of E3 2016 to recap, reflect, and alliterate ad nauseum. Jay gives everyone funny names. Frank gets hacked. Anthony is a real life anime girl. If I were to describe a list of talking points, they might looks like: the atmosphere of this year’s E3, Mass Effect: Andromeda, Dishonored 2, Microsoft’s Project Scorpio and the rise of stop-gap consoles, a new Dead Rising that seems to remember to be fun, the obnoxious fact that zombie games STILL will not stop happening, the quality-versus quantity of The Last Guardian, the beauty of South Park: The Fractured but Whole, the immortal ghost of Tom Clancy, the wild call of The Legend of Zelda: Breath of the Wild, the importance of those little ribbons, a bunch of JRPGs, Overwatch, and Grand Kingdom.

Music for this episode comes from The Legend of Zelda: Breath of the Wild, Trials of the Blood Dragon, and The Quick Brown Fox. 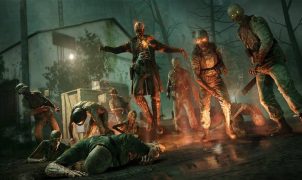 Undead, Undead, Undead.     The latest entry in Rebellion’s campy, team-based, undead shooter saga, Zombie Army 4: Dead War is the most ambitious entry in the series to…