The Legend of Zelda: Breath of the Wild Plays with Physics

The new Zelda is still about swords and gear, but its also about gravity and large objects.

Today’s Nintendo Treehouse broadcast started off strong with a new trailer for the oft-delayed and elusive new Zelda game coming for Wii U and NX. The game now has a name, titled The Legend of Zelda: Breath of the Wild, and shows a lot of new mechanics and ideas coming to the land of Hyrule. Link’s got new weapons and outfits, and a whole lot of new items. Something truly interesting about the trailer and gameplay footage shown, though, is the new emphasis that seems to be placed on utilizing physics. Check out the trailer released earlier today.

Okay, now that you’ve had a moment to compose yourself, let’s jam. We see a lot in this trailer, including Link wearing different outfits and fighting with things that are notably not swords. More importantly, we see him gearing up in ways that utilize his environment and open up new ways to kill those weird red orc-dudes that Nintendo is so fond of. We start off by seeing simple stuff, like chopping down a tree to cross a big gap. While simple, even this little touch is a step in crossing gaps in Hyrule that we haven’t really seen in Zelda before. If only we had that for the impossibly giant canyons in Twilight Princess.

Things got intriguing, though, when Link pushed a rock into some guys. 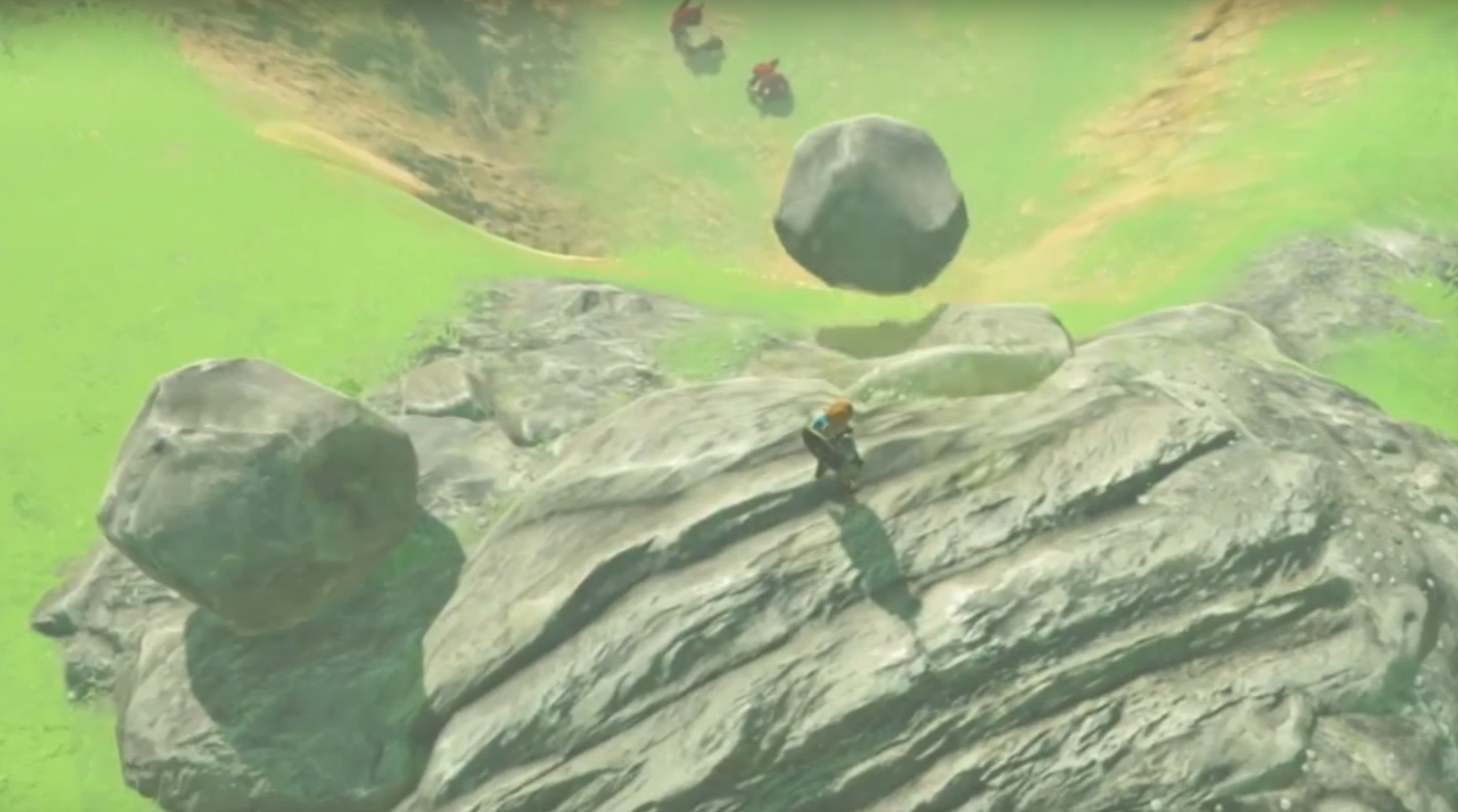 This marks a theme in this trailer, and the gameplay footage that came after, of The Legend of Zelda: Breath of the Wild being designed with an emphasis on using environmental resources and physics as an avenue to success. We see it immediately after, when Link begins playing with water in unusual ways.

We see Link use an item to pull a three-dimensional “brick” of water right out of this small lake, make it solidify, and then climb that bad boy like a tiny mountain (climbing is something else we can apparently do a lot of.) If the player is able to manifest whole bunches of these at a time, they could be used to mount ariel assaults on enemies, or even pen them in. 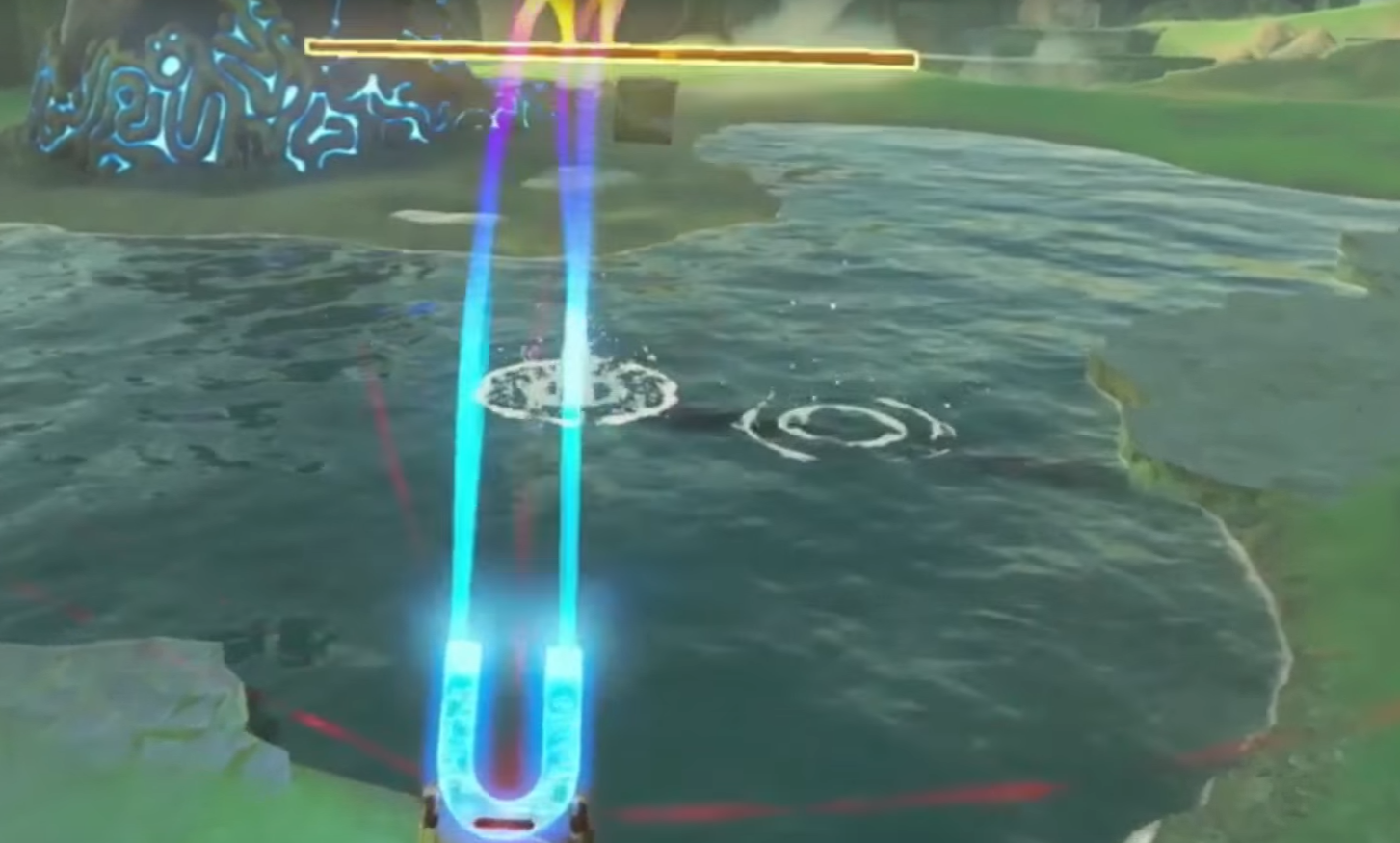 “Magnesis,” which we have now learned is one of many runes Link can utilize throughout teh game, allows for manipulation of anything metal. In the trailer, we see the power used to great effect, as Link drops a huge metal bar on a bunch of enemies without even being seen. Imagine doing this with even bigger items, like sending a huge metal crate sliding down a mountain and into a goblin who is about to have the worst of days.

From there we see Link working with space, fighting a foe on a  narrow bridge. We see huge vistas and landscapes of all different types. As I write this, we’re continuing to see more of The Legend of Zelda: Breath of the Wild at Nintendo’s treehouse stream, so the new orientation of physics and environment in gameplay is something I hope viewers will keep an eye on as we see more throughout the day. Let us know what other interesting mechanics you’ve noticed in the comments below! 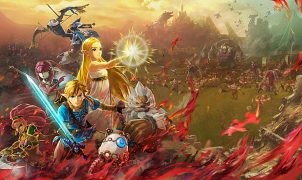 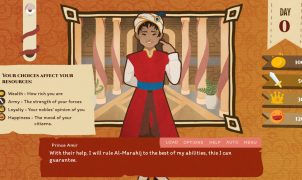