Titanfall 2 Is Launching This October

The release date for Respawn Entertainment’s Titanfall 2 has accidentally been confirmed, during the rehearsal for its pre-E3 conference online. Vince Zampella, has since addressed the issues via his Twitter page, and released the full HD video on YouTube.

During the mishap EA’s Devin Bennett was shown on stage, announcing Titanfall 2’s full single-player campaign which is playable offline. Stating that, “Titanfall 2’s single-player is crafted to dive deeper into the Titanfall universe, exploring the unique bonds between Pilot and Titan, and taking full advantage of the movement and combat, to deliver a feeling of being unstoppable together.”

The trailer displays a Titan AI explaining that its original Pilot has been killed and it has now been linked with Rifleman John Cooper, presumably the name of the campaigns main protagonist. From there it goes on to show a new reptile-like species fighting with each other, and a cargo bay showing off some new Titan classes.

It appears that these new Titans are more nimble and well equipped than those of the previous game. One can be seen displaying karate like movements, while another is brandishing a massive gatling gun. In epic Titanfall display, the trailer ends with an in cockpit view of Titans being dropped into battle from space.

It wraps everything up nicely with an October 28 release date. Unlike its predecessor, Titanfall 2 will be released on PS4, along side the Xbox One and PC versions. The game will be on display at EA Play, the publishers E3 showcase. While EA doesn’t have a booth at the expo, it will be hosting a live briefing Sunday, June 12 at 1 PM PST / 5PM EST.

Are you ready for more Titanfall? Where you expecting such an early release date to be announced? Let us know in the comments below.

Under The Radar: Titanfall 2 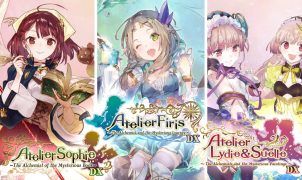 Back and Better than Ever     The Atelier Mysterious Trilogy marked a unique time for the Atelier series as a whole. The trio of games came during a time when…