On Ribbons and Respect at Bethesda’s E3 Conference

A little ribbon can send a big message. As I’m sure everyone reading this article must be aware by now, a mass shooting occurred at a gay bar in Orlando, Florida this morning. Over 50 were killed, and the shooting has been recorded as the worst in American history. It was, to not mince words, a massacre. And yes, this piece is about that.

At the same time, today was also the beginning of the 2016 Electronic Entertainment Expo. Bethesda’s conference ended, as I sit down to write this, less than an hour ago. This piece is also about that.

Adam Sessler and Morgan Webb were happily reunited for Bethesda’s pre-show commentary on their E3 stream, as a welcome sight to all. Through the whole event – switching camera angles to hide a guy’s ridiculous shirt, and the lady screaming for Skyrim Remastered – something consistently made me smile. Something that had nothing to do with my personal love for Dishonored 2, and everything to do with the rainbow ribbons both hosts wore on their lapels.

This brings up a topic I always find equal parts interesting and frustrating, as so many things in this world tend to be. Every host, presenter, and person in any way in the public eye today had a choice to make. Do we acknowledge the tragedy that took place this morning? If so, how? If not, how do we justify that to those who will inevitably ask? It seems that whenever some big event in the gaming world occurs, some internet commenters will always butt in with the chorus of something along the lines of “why are we worrying about this when people are starving to death.” And you know what? That’s a good question. Doesn’t an event like what occurred in Orlando today overshadow the need for us to see a reveal for a new Quake game?

Sessler and Webb’s answer to that question showed off a really cool “the show must go on” mentality, and one that I think is reflective of how these things should always be treated. Regardless of what tragedy may have suddenly befallen your world on the day you are putting on a show you have been planning for months, it’s impossible to simply pretend that it didn’t happen. Not only that, it’s disrespectful to those connected in some way, direct or indirect, to the event itself. Conversely, though, the murders don’t affect any of Bethesda’s upcoming game releases, so it didn’t change the way the presentation was intended to go. Acknowledgment is important, even if it doesn’t change the game plan.

Let me put it this way: as an openly bisexual individual, I spent most of my day today feeling angry, sad, threatened, and worried for my friends and loved ones within the LGBTQ+ community. It followed me from the moment I read the news this morning, on my phone before I even got up. It followed me into the shower. It ate breakfast with me. It drove me to work. But at the end of the day, I tuned in to Bethesda’s stream, and found myself comforted by the ribbons, and the silent acknowledgment that they bring. It sends a message: “we know you’re hurting, and so are we, but we’re in this together. You’re safe here.”

There’s pain, we know, but onward we go. 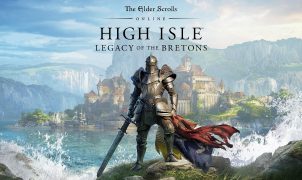