You should should get this DLC, just ’cause… 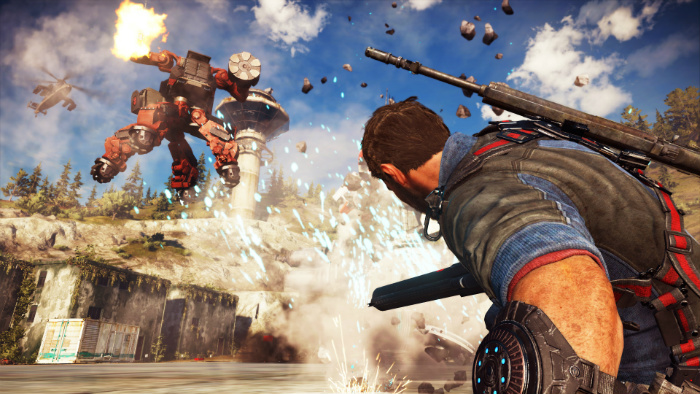 The already insane grapple-hooking, explosion-riddled Just Cause 3 takes a cue from giant robot anime, with a new expansion pack featuring two pilotable mechs.  Just Cause 3: Mech Land Assault is second content pack from the Air, Land and Sea Expansion Pass, and it will be available on June 3 for Expansion Pass Holders, with a wider release to follow on June 10.  Mech Land Assault brings our favourite dictator-removing CIA operative – Rico Rodriguez – to the brand spanking new island of Lacrima, which houses an abandoned eDen research base and a prison camp operated by the suitably evil-sounding Black Hand. Mighty Mecha patrol Lacrima, and Rico will need the new Bavarium Power Core rifle to disable their shields and hijack them for himself. Once he’s commited Grand Theft Mecha; Rico can use powerful cannons and the GRIP Gravity Guns to hurl and smash the enemy into bloody atoms. Just like real life then!   Just Cause 3: Mech Land Assault advertises the following key features:          * Pilot two types of powerful Mech and drive them anywhere in Medici.          * Unleash the Mech’s Gravitational Remote Influence Projector or “GRIP” to attract and hurl objects at your enemies.          * Jump and smash helicopters from the sky or ground pound tanks with the GRIPS’s “Force Pulse” attack.          * Prove your skills and earn upgrades in Mech arena challenges.          * Call in a Rebel Mech buddy for extra firepower when the going gets tough.

Tobias Andersson, Senior Producer at Avalanche Studios had the following to say about the upcoming release of Mech Land Assault:  “The Bavarium Wingsuit from the Sky Fortress DLC fundamentally changed how Rico could traverse Medici. This time, we wanted to shake up how Rico interacts with his environment in a similar way… The new Mechs allow Rico to throw enemies, vehicles and chaos objects around like tennis balls – increasing the scope for physics-based fun. Whether you’re juggling a small car or punching helicopters out of the sky, the Mechs give you the opportunity to mess with your surroundings in creative, explosive ways.”

The Mech Land Assault pack is priced at $11.99/EUR11.99/£9.49. You can get the Air, Land and Sea Expansion Pass for $24.99/EUR24.99/£19.99. The final content pack: Bavarium Sea Heist, comes out at the end of the summer of 2016, and will be available one week early to Expansion Pass holders. So if you’re that rare, uncommon sort of person that likes shooting, explosions AND rampaging mecha suits, give Mech Land Assault a gander!