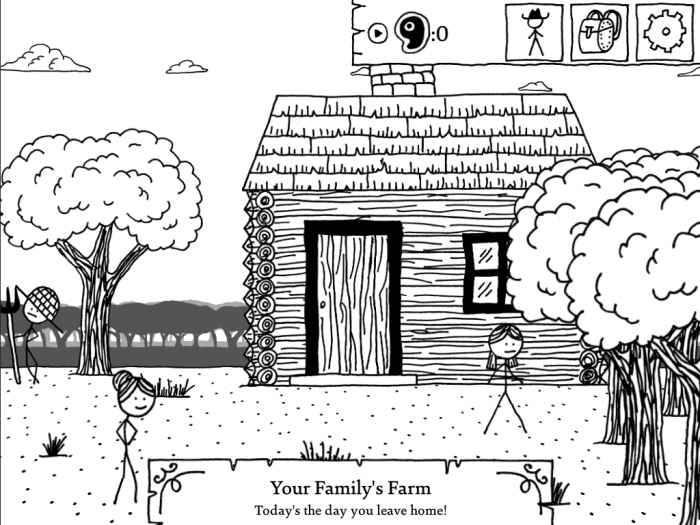 All the way back in 2003, a small development team known as Asymmetric Publications LLC published an MMORPG known as The Kingdom of Loathing. Clever, bizarre, and tongue-in-cheek to the max, this MMO is still up and running, having entertained and/or horrified over 2 million people. Now, 13 years after KoL first made its monochromatic debut, the second game in the Loathing series, an RPG by the name West of Loathing, has finally been announced and is set to release sometime in 2017. While exciting, news of this sequel spawned quite a few questions for us here at HPP. Fortunately, we were able to sit down with Asymmetric’s very own Zack Johnson to get the scoop on their upcoming game.

HPP: Can you give us a general overview as to what West of Loathing is all about?

HPP: What made you decide to settle on a Wild West theme?

ZJ: I’ve always felt like the Wild West genre was underrepresented in RPGs. I think it’s very similar to medieval fantasy in a lot of ways: a comprehensible level of technology (guns instead of swords,) a dangerous environment (snakes and outlaws instead of dragons and brigands,) and a primal, hero-centric mythology (gunslingers instead of knights.)

ZJ: We haven’t decided yet if we want to do something like a promotional KoL item for playing WoL, but I wouldn’t be surprised if we end up doing something along those lines.

HPP: Will those who have never played The Kingdom of Loathing before have a difficult time playing West of Loathing?

ZJ: Not at all. WoL’s rules and gameplay are completely different and completely self-contained (and hopefully self-explanatory.) The only thing coming over from KoL is the art style and comic sensibilities.

HPP: Kingdom of Loathing was originally released in 2003. Why wait 13 years to announce a second game within the Loathing series?

ZJ: We were given a contract to make an educational game a couple of years ago, and in doing so we realized “Wait a minute — we could totally make a KoL-style game in Unity and it would be like a modern video game instead of a weird throwback.” So… we did.

HPP: Have the players within the community for The Kingdom of Loathing been supportive of West of Loathing?

ZJ: Absolutely. From what we can tell, they’re very excited. Their support allowed our Greenlight campaign to be successful in just 9 days.

ZJ: Yes! The Steam comments on the Greenlight page were full of people saying “Oh yeah, KoL, I used to play that. This new thing looks fun!” And every time we post something about it to Facebook, former players come out of the woodwork to reminisce with the people they used to play with.

HPP: What helped steer you toward shaping West of Loathing into a standalone RPG rather than as an expansion for The Kingdom of Loathing, or as a completely new MMORPG altogether?

ZJ: Well, although it is obscure at this point, KoL is still very much a going concern, and it requires a ton of work to keep it running and to keep players interested by adding new content. We didn’t want to make another game that we’d have to support as a service the way we do KoL, because we’re still a pretty small team and there are only so many hours in the day. Plus, it seemed like making a smaller, standalone game would be a nice change of pace, creatively.

HPP: You’ve likened the game to Skyrim a few times. Are there any other games that you’ve drawn inspiration from?

ZJ: The game that was probably the most influential on West of Loathing was probably Hero’s Quest (later renamed to Quest for Glory.) It’s an adventure game with significant RPG elements that change the way the gameplay and the story unfold. I also played a lot of the Space Quest games, which I’m sure influenced the tone and humor of my games, and the early entries in the Might and Magic series, which were the beginning of a life-long fondness for RPGs.

HPP: Have you ever gotten any criticism for staying true to using stick figure art? If so, how do you handle it?

ZJ: That kind of criticism is very easy to ignore. My art style is crude, but it’s not careless or sloppy, and I’d like to think I’ve spent the last 13 years getting better at using it expressively. People can either handle the aesthetic or they can’t, and if they can’t there’s really no convincing them.

HPP: Can we expect a third game in the Loathing series in the future?

ZJ: I certainly hope so! Assuming West of Loathing sells well enough to justify keeping the team together, we’d love to continue making games in the engine we’ve developed for this one. A hypothetical next game would probably either be a Lovecraftian horror game set in the 1920s, or a Flash Gordon-like space opera.

HPP: Alright, one final question; just how dumb are the dumb jokes within West of Loathing? Don’t hold back on me; I can handle it.

ZJ: I need to find the worst joke we’ve written so far so I can have a ready answer for this kind of question. One of my favorite gags so far is the cemetery called Reboot Hill, where all the dead gunfighters have come back to life as dangerous skeletons.

We at Hey Poor Player appreciate Zack taking the time to talk to us about his upcoming game. For more on West of Loathing, be sure to check out Kenny’s recent preview of the game that you can find here. Additionally, be sure to visit West of Loathing’s official site for the latest news and media on this upcoming Weird West adventure.