With These Theories The Game Never Has To End Sometimes developers will include an Easter egg or shout-out to another game series. Far from being spiritual successors, these games tend to exist in entirely different worlds with only a tenuous connection included for the benefit of eagle-eyed players. Harmless fan-service.

However, if you’ve got some time and a bit of imagination these subtle references can take on a host of unexpected implications. Before anyone gets their shorts in a twist, I get that the examples I’m about to give are hardly conclusive, but games are meant to be fun dammit. So just this once, let’s suspend our disbelief and take the facts as they are presented. Who knows? It might just open up new dimensions of games you thought you knew.

Thief is a sequel to Skyrim

This entry is the low-hanging fruit of the bunch, but it’s probably the best way to gently ease the more skeptical of you into the realm of video game truthers.

In the Thief series, the protagonist Garrett is a master thief and former member of an ancient sect of observers called the Keepers. Garrett lives in “The City,” a large medieval steampunk metropolis bisected by a river. The twist? Garrett is actually a descendant of Cynric Endell from Skyrim.

“The City” Garrett explores and plunders in the Thief games is actually just Riften several hundreds of years later. In Skyrim, Cynric is a Breton member of the Thieves Guild situated in Riften. Cynric is not a viable option for marriage, no matter how much woo is flung his way. This is because he needs to be “available” for whoever ends up being Garrett’s grandma.

Not only are the characters similar; both wear stylish hoods, work as thieves, are handy with a bow,  and are voiced by Stephen Russell (at least until the 2014 reboot), but the world they live in is also extraordinarily similar.

Riften was the only walled city in Skyrim, with one of the entrances (the one leading to Morrowind) having been boarded up due to external threats. It’s not unreasonable to assume that over time the other three entrances to the open world would meet the same fate, thus isolating Riften from the rest of Skyrim.

The geography is also on point, as Riften is situated by a lake with parts of the city extending over the water, kinda like they would if the city eventually expanded over to cover the other side of the lake. There are any number of reasonable explanations for how the lake would eventually become a river by Garrett’s time.

Notably dragons have died out once again and, with little else to do, the remnants of the Greybeards and the Blades eventually morphed into the Keepers, who end up training Garrett. Both games also have an organized thieves guild based in subterranean sewer lairs. Some things never change. 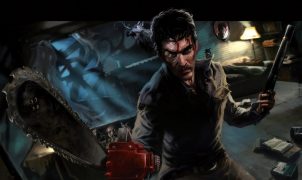