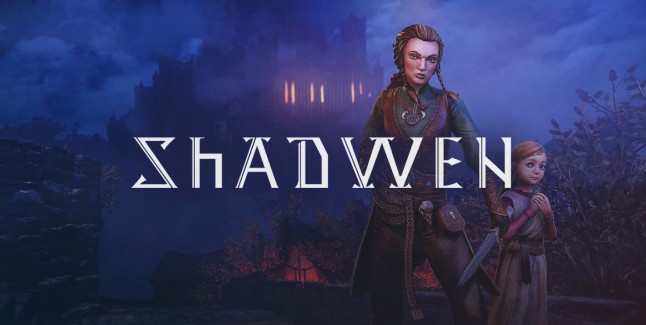 Imagine a world with a corrupt king at its head, so cruel in his workings that you feel you must take it upon yourself to take him down. Imagine a world where you can start and stop time at will as you sneak, swing, and strike your way to your opponents.

Now imagine a world where you decide to take a child along for the ride, for no reason other than that you find her love of apples endearing. Also, everything is miserably purple.

If you find that imagining all of these things in conjunction feels familiar, chances are pretty good that you’ve been playing Shadwen, the new game by the guys behind Trine. If you’ll excuse the pun, it doesn’t seem that the team was “Trine” very hard at all when making this thing, which takes a concept potential and turns it into a 6-hour chore. Welcome to Shadwen, assassins and assassinettes. Let’s begin. 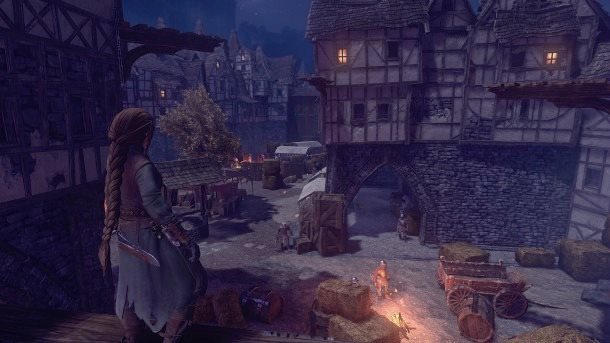 Shadwen is immediately interesting as a stealth game, due to the way things move – and don’t move – around the player. Time only moves when the player character, Shadwen herself, is in motion, or when a button is held down to make time pass. In theory, this is an awesome decision for a stealth game, as it gives the player time to stop, assess, and strategize at any time, all while still presenting challenge in motion. Shadwen herself can sneak, run, jump, and swing from a grappling hook to get where she needs to go. There’s also the option to rewind time if you get killed, ready to trace your actions all the way back to the start of the level if need be.

Levels consist of series of roads, tunnels, corridors and the like, all full of guards to avoid and obstacles to overcome. Every guard in the game is armed with a crossbow, and is an expert shot as soon as they see Shadwen scurrying about. With that in mind, it’s important to keep an eye out for the environmental assets laid out for maximum sneakage. There’s haystacks and bushes to hide in, rafters to grapple up onto, and, most usefully, a whole bunch of boxes and barrels to push around, all in the name of distracting the dudes who so rudely want to foil Shadwen’s purely recreational king-killing exploits. Shadwen also has a knife, which means eliminating soldiers in a more direct way is also an option. Beware, though, as any corpse left freshly murdered may be noticed by another guard. If they see your handiwork, they’ll be ringing alarm bells faster than you can say “I wonder when Dishonored 2 is supposed to come out.” 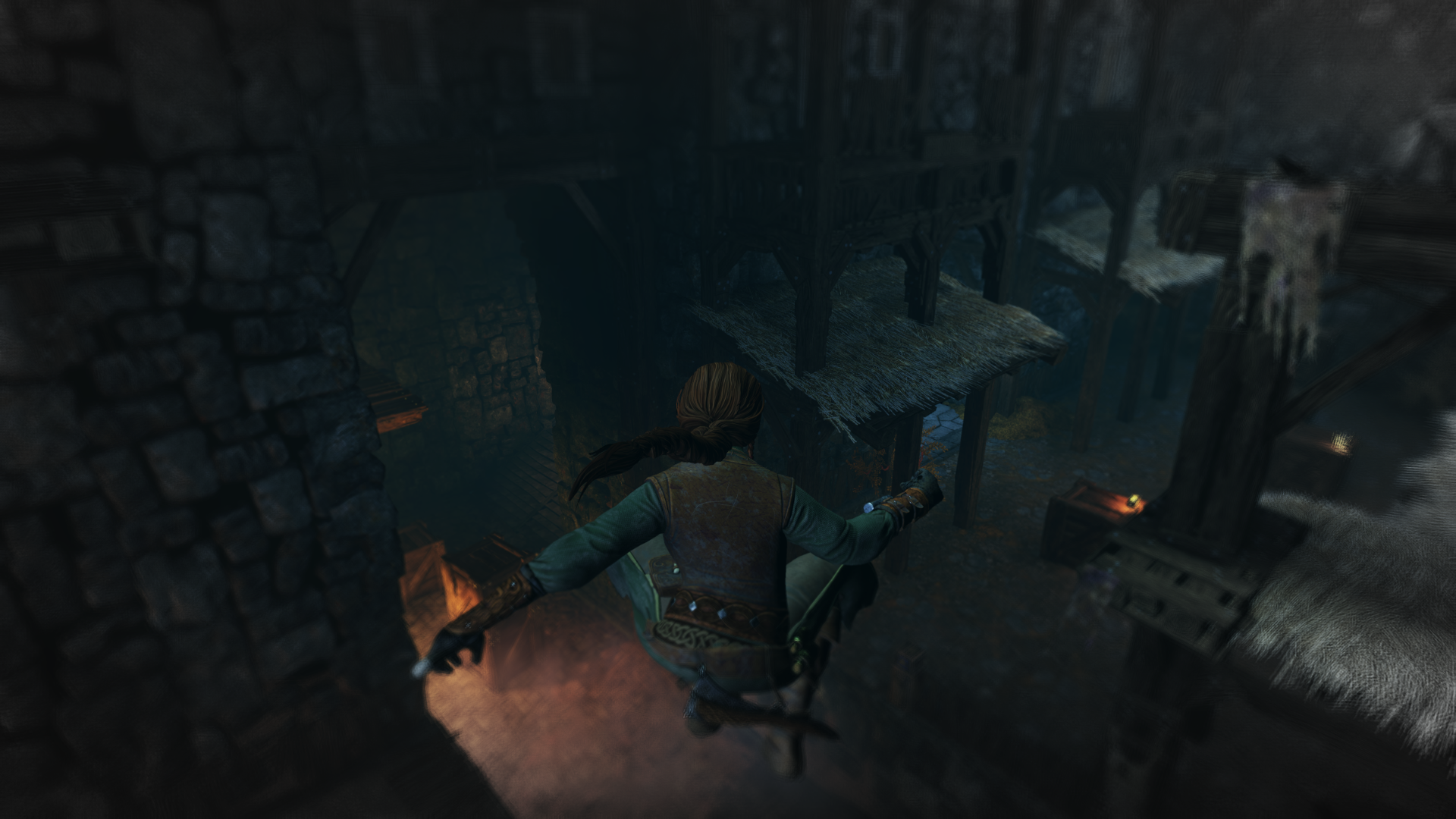 So, you’ve got your stealth route and your straight-up murder options, right? The game even lets you craft a couple more items as you progress, such as a poison dart trap or a decoy. This is all shaping up to sound like an overarchingly fun stealth experience, but there’s an elephant in the room. Her name is Lily, and she’s an orphan girl who Shadwen inexplicably decides to take with her on her journey. Lily isn’t particularly useful, existing only to occasionally help you open a door or…open a door. You have to keep her alongside you, though, as progression is utterly impossible without a second pair of hands. The central problem around Lily, though, is that she feels utterly valueless past this superficial level. She’s never in any real danger, as guards don’t even notice her. In my time with Shadwen, I saw her run into the path of guards numerous times, turn around in plain sight of them, and return to whatever haystack she had been biding her time in. She is literally nothing more than a tool with legs; and an inconvenient one, at that. Whenever you choose to fatally dispatch an enemy, you will be warned via text bubble that seeing a dead body will traumatize and terrify Lily, which will affect the ending of the game.

It doesn’t help, either, that Shadwen’s presentation leaves a bit to be desired. Games don’t need to have fully-animated cutscenes, and explaining story beats with hand-painted stills can be a lovely way to go (looking at you, Supergiant). Here, though, said stills don’t seem to always fit what’s being said, especially when there are very few to go around. Sometimes, voices won’t even sync up with the stills meant to go with them. Shadwen and Lily’s voice actors are largely fine, but there’s something about the way the former talks that makes her sound like she’s trying to be less of a murderer-to-be, and more of a stately old woman maintaining a manor out in the countryside. The voices are backed by music that actually feels quite fitting and moody at first, but then proceeds to recycle itself ad nauseum.

With the actual story of Shadwen consisting of the protagonists journey to King Future Dead Guy, the game itself becomes a sort of road trip story. Shadwen and Lily make their way through catacombs, city blocks, an old prison, and more locations. These levels very seldom feel unique, mostly due to the fact that the range of player action in them stays the same. There are rarely any puzzles or challenges presented in one of Shadwen’s fourteen levels that couldn’t just as easily have been presented in any other. To make matters worse still, despite the specific variety of locations across the game’s levels, everything kind of looks the same. From streets to tunnels, virtually every single environment in Shadwen is cast in moody purples, with the occasional soft orange to remind you that other colors still exist. Initially, the color choice is initially quite nice, lending a very particular mood to each alley being skulked down. After six hours or so, though, it’s another story. I find it telling that one of the few standout images I took away from the game was the first time I stepped into a corner of an area that was, mercifully, the color blue.

And that, really, is the core of Shadwen’s whole problem. Just like the violets hues keep on being violet, the game loop itself is tortuously repetitive. If you want to keep Lily’s sweet, innocent little orphan eyes from seeing your murderous side, you’ll be spending the whole game using your grappling hook to slightly move boxes, and then staying in cover until the guards (who, incidentally, are piloted by extremely gullible AI) are thoroughly distracted, and then make your escape. You will be running around, hoping Lily is behind you, only to find that a route that you were able to escape a guard through was deemed too much for her. There’s a simple rule that should work in a game like this; one where whatever footpath to success works for the player character should also work for whatever companion is following them. Unfortunately, the AI of Shadwen is too ill-programmed for that.

At the end of the day, the disappointment wafting from Shadwen is a product of its own wasted potential. The prospect of a stealth game with what amounts to an infinite time-freeze mechanic is a great one, but goes nowhere interesting. Nothing about the scenarios presented feel like they actually benefit from, or need, that design choice at all. The game shamelessly arms players with lethal methods of dealing with enemies, only to play the old good/bad ending card. The AI is easy to fool in the case of enemies, and impossible to coax in the case of Lily. Gliding over all, though, is the fact that Shadwen is, indeed, a six-hour escort mission. I came in here expecting Assassin’s Creed, and all I got was a whole bunch of Babysitters Club books. The ones you give to annoying baby cousins you hate.

Full disclosure: This review is based on Playstation 4 review code supplied by the game’s developer, Frozenbyte.