The PlayStation 2 certainly had no shortage of breathtaking adventures in its library. After all, this was the console that such spellbinding works as developer Level-5’s Dragon Quest VIII and Dark Cloud 2 called home. These titles, along with a stable of other drop-dead gorgeous epics as Final Fantasy XII and the stylish and surreal Shin Megami Tensei: Nocturne introduced players to a more aesthetically captivating worlds than they’d ever before experienced. These examples are barely scratching the surface, however. Sony’s second home console saw a steady stream of stellar RPGs over the course of its impressive 13-year run. And there were plenty of studios who took advantage of the PlayStation 2’s hardware to craft some of the most unforgettable and imaginative worlds the industry has ever seen.

Sure, the PlayStation 2 had some unbelievably good looking games under its belt, but few of them managed to take this things to the same level as developer Vanillaware’s 2007 classic, Odin Sphere.

One part kick-ass side-scrolling adventure, one part Wagnerian opera, Odin Sphere‘s sprawling land of Ragnanival was brought to life with immaculately detailed character sprites and lush backgrounds that would look more at home in the Louvre than on your television screen. Now, nearly a decade after the game was originally released, ATLUS and Vanillaware have added an extra layer of polish to this modern masterpiece, and the results are nothing short of incredible. While we’ve spent the past few weeks diving deep into Odin Sphere Leifthrasir on the Vita and PlayStation 4, we still can’t quite shake that feeling of wonder as we explore the game’s storybook landscapes. From the lush and verdant Forest of Elrit that’s populated by hordes of menacing teddy bears to the proud pillars and towering statues that loom over the halls of Nebulapolis, every subtle detail and careful brushstroke pops off the screen. This is all thanks to the game’s fresh 1080p/60fps facelift, of course. Sure, the original game still looks pretty phenomenal to this day, but being able to see even the finest detail in each character, from the delicate folds in a bed’s linens to the most minute etchings in an enemy’s armor, is really a sight to behold. And let’s not forget those bosses! Odin Sphere Leifthrasir features an entire bestiary of mammoth monstrosities that dominate the entire screen, and they look better than ever in glorious HD.

As remarkable as the upgraded visuals are, the boost to performance is just as welcome an addition to Odin Sphere Leifthrasir’s package. Whether it’s on the Vita or the PlayStation 4, the game moves at a lightning-fast pace, and never manages to slow down regardless of how many enemies and explosive potion and spell effects are on screen. That means you can glide, slash, and blast away baddies to your heart’s content while you focus on reaching that coveted 9999 hit combo without ever worrying about a sudden drop in the game’s frame rate bringing the action to a crawl. Odin Sphere: Leifthrasir’s enhanced visuals and performance are certainly welcome additions for this remastered classic. However, they’re not the only improvements over the original release included in Leifthrasir.  Developer Vanillaware has also managed to make a few changes to a few other areas of the game as well, further expanding on Odin Sphere’s alchemy system while also introducing a tasty new cooking feature for players to dig into.

In the original Odin Sphere, players were able to brew potions by mixing an item with a flask of liquid called a material. These potions did everything from heal your character to provide status buffs and inflict massive elemental damage on enemies (making them a must when battling the game’s challenging bosses). Odin Sphere Leifthrasir expands on this system by allowing you to now combine a potion with an item to create new recipes. Additionally, these concoctions can now be merged with each other or with food items to increase their potency. Also, unlike in the original release, it’s no longer necessary to have recipes on hand order to create potions, as you’re now able to figure out your own combinations by mixing, matching ingredients to your heart’s content. It’s a nifty little system that encourages experimentation and adds a welcome layer of depth to the game.

In addition to the updates to the alchemy system, the cooking mechanics have been overhauled as well. The biggest change to the system comes in the form of the Rest Areas players will discover during levels.  By ringing a bell, you can summon the Pooka chef, Maury. Here you can pull up a seat and scarf down some good, old fashioned home cooking at Maury’s Touring Restaurant. If you provide Maury with a recipe you’ve discovered on your journey along with the required ingrediants, he’ll whip up a hearty dish that will restore HP and raise players’ experience points. These meals offer bonuses to EXP accumulation as well, meaning you can gorge yourself with a multi-course meal and gain some serious levels. Take that, Guy Fieri!

We’ve thoroughly enjoyed falling in love with Odin Sphere Leifthrasir all over again over the past few weeks. While the changes to the core game are subtle, they do a solid job of further refining one of the most mesmerizing adventures of the past decade. The overhauled visuals are nothing short of astounding, and you’ll be hard pressed to take your eyes off of the screen when exploring the game’s lush fantasy world. Those wanting to get their mitts on Odin Sphere Leifthrasir won’t have to wait too long. The game is poised to release on June 7th for the PlayStation 4, Vita, and PlayStation 3. Those who manage to pre-order the game from participating retailers, will receive a 64-page softcover art book will come with standard versions of Odin Sphere Leifthrasir.  A special Odin Sphere Leifthrasir “Storybook Edition” premium version will also be available for the PS4 version of the game, which includes a hardcover version of the art book (shown above), a special Potion Recipe t-shirt, a metal slipcase for the game, an art print, and premium outer packaging.

For more on Odin Sphere Leifthrasir, stay tuned for our full review of the game when it goes live on June 1st.

So, are you looking forward to digging into the game when it releases in less than two weeks? Be sure to sound off in the comments section and let us know! 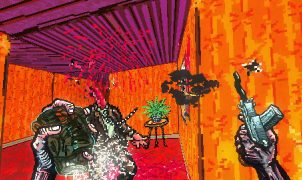 Going Postal Post Void is, without question, the strangest game I’ve played in ages. It violently blends the neon-soaked surrealism and bloody mayhem of Hotline Miami, the roguelike elements…