Any list consisting of famous video game number twos would be remiss without our green pal from Nintendo’s corner. Luigi is the definition of “shadow” character; Mario is always the character that gets the glory. Luigi, however, deserves to have his due recognition. While seemingly every title has Mario’s name, there are Luigi-centric games such as New Super Luigi Brothers and Luigi’s Mansion. While these titles serve their purpose, I believe it is not enough for our taller, skinnier friend. Luigi was my go-to character in New Super Mario Bros DS, and was my number 2 fighter in Super Smash Bros Brawl. I think we can all agree that Luigi lacks his rightful 15 minutes of fame, so here they are. In this article. At the number #4 slot… *sigh*. To learn more about the story of Luigi, I’ve embedded a very interesting video that is sure to fascinate viewers. 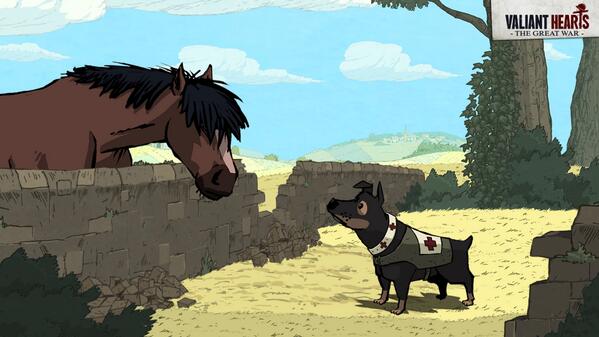 Humans are blessed to have the undying loyalty of the canine species. I think we have all had a loving connection with a dog at some point or another; this connection is embodied perfectly in Valiant Hearts. While the tale of the First Great War is a harrowing one, Walt’s persistent friendliness offers a comforting respite in the face of grave danger. Emile can give orders to Walt in order to ensure each other’s survival; indeed, it is a symbiotic relationship that perpetuates both pure survival as well as emotional survival; they needed each other to get through the war. I won’t spoil the moving story, but the ending only cements the bond that the two share. Walt is easily one of the most touching characters in gaming, and Valiant Hearts: The Great War did both gamers and dog lovers alike a great service by introducing them to Walt.