What happens when Sonic meets Doom? As a long-time Sonic the Hedgehog fan, it pains me to see the sorry state of SEGA’s once glorious mascot. The company has effectively buried the franchise after a slew of titles that range from mediocre to flat-out awful. But what happens when dedicated, lifelong fans unofficially try their hands at making a Sonic game without corporate baggage? One such result in the extensive library of Sonic fangames is the rather absurdly-named Sonic Robo Blast 2. It’s a 3D platformer built on a heavily-modified version of the Doom engine called Legacy. And it’s good. Really, really good.

The most notable design decision was to take influence from the early days of the Sonic franchise. That means Sonic doesn’t fall in love with humans, wear brand-name sneakers or grind on rails. It’s the familiar ring-collecting, robot-busting, fast-running gameplay that we all know and love from the 1990’s. And it’s all rendered in three dimensions with an eye towards complex, compelling level design. There’s even a special stage inspired by the gameplay of NiGHTS Into Dreams.

Owing to its Doom heritage, Sonic Robo Blast 2 also features multiplayer over a LAN or split screen. Modes of play are plentiful, including tackling the single-player campaigns cooperatively and a variation on classic FPS deathmatch where rings serve as both weapons and health. It’s a bit goofy and I’m not sure if I like it, but it’s certainly refreshing and different. The game also features extensive mapping and modding capabilities. There is a long-gestated, lively community creating new content for the game: these range from simple levels to entire map sets and add a considerable amount of play time. Two worth checking out are Tortured Planet and The Mystic Realm, which are so extensive that they’re almost new games in their own right. Sonic Robo Blast 2 is a great little freeware download for Sonic fans or anybody looking for a solid, 3D platforming experience. I won’t lie: the graphics could be a lot better, it’s a little rough around the edges and the difficulty spikes a bit too rapidly for its own good, but it’s still a thoroughly playable nugget of gaming goodness that’s crafted with a lot of love.

You’ll be able to get it from its official page here. Besides a Windows build, OS X and Linux users can also get into the action. Amusingly, a version for the PSP exists as well. It also has its own soundtrack available for download, which comes highly recommended and is far too catchy for its own good. 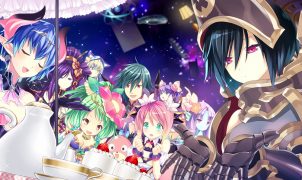 The Beauty of the Beast     As a reviewer, I’ve had plenty of experience with Japanese games that specialize in hitting players with heavy doses of… erm… shock…