Product Placement At Its Finest I have this tick about advertising within media. When I watched Superman II recently as an adult, I realized that most of the last half of the movie is nothing more than an ad campaign, and since then I am always pointing out the not so subtle marketing. I thought that the marketing in movies was too obvious, but that was until I saw the seventh episode of Bakuon!!

I noticed the references to the Japanese motorcycle manufacturers before in this series, but it was usually referenced in a conversation between the characters every so often; I think I was choosing to be ignorant. If there were a drinking game for this episode where you had to take a shot every time they mention a real manufacturer or model, no one would win in the end.

This episode centers around the race that was talked about in the previous episode. The girls have their bikes ready and they are walking the hallways to entice other students to bet on them. Gambling in schools; one more reason to love anime. The race itself was pretty boring as there wasn’t many nail biting moments to speak of.

The real focus of this episode, and what gave the race any real tension, was the immediate accident that Raimu was involved in and if she would be able to catch up with the rest in time. The funny part of this episode was the principal betting three million yen that Raimu Kawasaki would win based on her past friendship with her. The biggest eye roll moment was when Hane did an amazing jump and wings appeared from her Honda, metaphorically, that “happen” to be the Honda Motorbike Wings from the real logo. There is nothing much going on with this anime, as the majority of the people and their conversations consist of naming manufacturers consistently. I wonder how much money these companies threw at this show, if at all, and if the manufacturer that paid the most won the race in this episode. I am almost wondering if this show would even exist without it. I don’t have research to back any of that up mind you, but it does make one wonder.

This series has its ups and downs, but as much emphasis that was in the previous episode about the race, it was pretty anti-climactic. I am starting to believe that this series is nothing more than one big commercial and as a viewer of media, that just grates my nerves. I understand that product placement exists to help fund projects, but this too much. 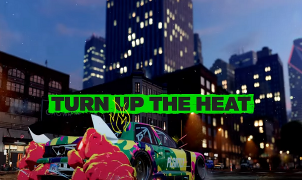