War seems like a game to some politicians, who use it to gain power and galvanize the populace into patriotic obedience. The imperial homeworld of Kronos, however, takes this callous mentality to a whole new level, as the entire planet is designated as a giant battlefield where the great families fight to determine who the next emperor is. This ceremonial war has strict rules to assure the life-or-death conflict is sportmanslike, such as a ban on chemical weapons. It also might explain – unlike most strategy games – why the battles seem somehow balanced as if to give each side a chance of victory. Clearly the arbiters of past succession wars have had time to carefully tune things after millennia of complaints one faction or another is OP and needs a nerf. In the campaign, you take on the role of an upcoming young commander of the great house Telit: the favourites to win the succession war.

Battle Worlds: Kronos is a back-to-basics turn-based strategy game – set on a playing field divided into hexagons – in the venerable tradition of the Panzer General series. Every unit has two actions. At the most basic level, you can move up to an opposing unit and attack, with the pair exchanging fire, subtracting hit points from each one. Ranged units like the nippy rocket-launching bandit can fire two hexes over without provoking a responsive attack, but they’re vulnerable as they can’t defend when they’re attacked in melee themselves. If you charge past your opponent’s line of tanks and infantry to attack their ranged units though, you can expose yourself to being surrounded. Surrounding an adversary with multiple units allows you to get big flanking bonuses when you attack, often leading to that unit being destroyed by overwhelming damage before it has a chance to respond. You have to think one step ahead of your opponents. Holding a line of tanks in a mountain pass presents a difficult defensive obstacle for your opponent, but being passive could allow your adversary to bring up his artillery; such as the devastating PRIEST howitzer, which takes a turn to set up but has massive range and firepower. Battles are satisfyingly complex because they require real foresight – and innovative use of the terrain – to overcome.

Battle Worlds: Kronos was a game that warned me in the tutorial of the first mission: “This game is very difficult, but you can’t complain about it”. When proceedings begin like this, you definitely know what to expect. Suffice to say, I’d barely started the second mission when I found myself yelling “BULLSHIT!” at my poor, innocent television. I quickly discovered one or two poor decisions could result in my entire army getting wiped out. I can only thank whatever occasionally beneficent deity who resides over this mortal realm (and the developers) for the fact there was an autosave every five turns. I used it. A lot. Luckily, though Battle Worlds: Kronos is challenging, it is not completely unforgiving. There are re-enforcements you can call upon every ten turns – giving you a much needed windfall of four fresh units – but the game will subtly imply that you’re a filthy plebian casual for using them! You’ll be rewarded with achievements for winning missions without re-enforcements, or by such other rubric as sustaining low causalties, or finishing quickly (not considered an achievement in real life, sadly).

If you don’t want to rely on re-enforcements, you can do things the old fashioned way by building your units in factories. To build these fresh footsoldiers on the frontlines of futility, you need resources, which you can find scattered around the battlefield or in supply depots you capture from your opponents. Your infantry can capture enemy buildings (which involves shooting them with miniguns apparently). Resources need to be conserved and used very judiciously, and so does ammunition. Your heavy artillery can only carry eight shot’s worth of ammunition, so you’ll have to keep a tally of how many times you’ve fired (unless you’re feeling lucky, punk). There’s no real base building or economic management to be done, but this makes sense as the core of Battle Worlds: Kronos is leveraging your finite armies and resources with strategy and tactics. The variability of how seemingly evenly matched battles can turn out depending on your skill level is vast, and shows a game that been well designed to reward good decision-making. I was pretty impressed at just how deeply your strategic prowess can effect battles. I blundered my way through my first few battles, suffering substantial losses. If you’ve got the tactical mind of Kasparov and Patton rolled into one however, it’s possible to win even the harder battles without losing a single unit.

Though the battles can be intense, they can, at times, devolve into a grinding battle of attrition towards the end. I had multiple missions where ended up just sticking it out, trading kills as I waited for the re-enforcements that would grant me victory. A few more ways to win a quick and decisive victory – rather than having to mop up every single enemy unit – would’ve made many of the missions less of a slog. Also, points between battles where you’re shuttling your huge, 20-plus unit army across the scenery can also get quite tedious. Since units can’t occupy the same tile, your army can get into “traffic jams” when crossing bridges or peninsulas – a pain many Civilization players will be well aware of. Though solving such logistical concerns might delight the hardest-of-the-hardcore strategy fans, this part of Kronos isn’t so interesting for the rest of us.

There’s a surprisingly in-depth story underlying the campaign which, oddly enough, was a big motivation to keep playing. The cutscenes really add to the intriguingly absurd nature of the reality show style war for the domination of Kronos. I particularly loved the intro movie where a general watches a devastated city from his window, seemingly ordering a nuclear strike, only to reveal the entire window was merely a giant TV screen. There’s also points during the battles where you’ll meet different characters and talk to them through rudimentary dialogue trees. Contained in these dialogues are often little nuggets of wisdom, suggesting which strategy you should take. Hidden challenges sometimes lurk in these dialogue trees as well, such as your supercilious rival Commander Parker challenging you try and capture an enemy base before he does.

Battle Worlds: Kronos is an in-depth strategy game that requires patience – and it left me feeling exhausted at times – but it rewards your perseverance. Though Kronos presents itself as a more involved experience, it’s not as dauntingly complex as a Victoria or Europa Universalis, and more casual strategy fans might be able to dip their toe in without getting burned. With an entertainingly quirky narrative to carry things along, I found myself wanting to rise to the ample challenge of each mission and win the succession war. If you’re tired of fighting your battles in real time and want to venture into something slower and more ponderous, Battle Words: Kronos is a good, bullet-strewn beach-head to make your attack. 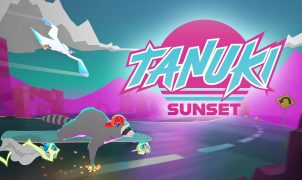 skate fast eat trash The year is 19-retro-x. You’re just a trash panda with a longboard, looking to roll wherever the road takes you. As cars and dumpsters whizz…