Japan and its love for fan created works is very interesting. Where in the west fans have to be very careful with how they approach showing off their admiration for a particular series lest they get a cease and desist order (see: various fan project remakes a la Chrono Trigger) or get sued, Japan warmly welcomes fan creativity and encourages it. In fact, there’s a whole market built around it. Comic Market and Wonder Festival (typically referred to as Comiket and Wonfes for short) are two huge conventions held semiannually in Tokyo and Chiba, respectively. At these conventions, fans of various anime, manga, and games create their own works, called doujinshi (literally: fan made work) and sell them to other like-minded fans. While doujinshi is typically associated with more adult-oriented entertainment, there is also plenty of kosher doujinshi made for fans of all ages to enjoy as well. One area doujinshi works cover are what is colloquially known as the doujin fighter. Just as it sounds, doujin fighters take characters from other media, typically visual novels, and put them into a fighting game scenario. This is similar to what people do in engines such as MUGEN, but these games are typically far more polished and are also usually made from scratch.

I have fond memories of doujin fighters, although to be fair I didn’t delve into them quite as deep as my other friends did, and I wasn’t exactly aware of what they were at the time. My first experience with them was in high school, when my friends and I were into anime/visual novel series such as To Heart and Kanon. One of my friends stumbled across some fighting games featuring characters from these games and we had a blast playing them. The games that stick out in my mind were Twilight Frontier’s Eternal Fighter Zero, and French-Bread’s Party’s Breaker: Queen of Heart ’99 and 2001. I didn’t realize it at the time, but French-Bread also made another doujin fighter that caught my interest, yet I never had the chance to play until now: Melty Blood. Originally sold at Comiket in 2002, Melty Blood is a series that closely follows characters and events from TYPE-MOON’s critically acclaimed Tsukihime visual novel games. In these games, players assume the role of Tohno Shiki, a teenage boy from Misaki Town who after a childhood accident gains the ability to see “death lines”. These lines are essentially what hold an object or person together and if they are cut or pierced, they completely destroy them. After being banished from his household due to his injury, he receives glasses from a mysterious red haired woman to control his ability and after eight years, returns home. After returning home, he begins to learn about his mysterious past and gets implicated into an otherworldly adventure dealing with vampires, secret church organizations, and romance with a host of lovely ladies, some alive, some not so much.

Melty Blood takes place one year after the events in Tsukihime and its followup, Kagetsu Tohya. The series begins with Shiki hearing of a new series of murders taking place in Misaki Town and his investigation into what is causing them. The series initially maintained its visual novel roots, with the outcomes of battles affecting the path the story branches on. Melty Blood: Actress Again Current Code is the third game in the series and is actually an arcade port of the PS2 version of the second game, Act Cadenza. While it lacks the more story driven modes found in the original release from 2002, there are still story segments that play out in the standard Arcade mode, with some character matchups having cutscenes in between. There is also online play for people looking to scratch that ranked multiplayer itch, as well as local player versus player and training modes. Players entering Melty Blood for the first time will notice a host of characters at their disposal, 31 in total to be precise. While some may appear as minor variations of one another, each character has their own unique feel and set play mechanics to them. In addition, characters have three different fighting styles to choose from, each cleverly referring to different cycles of the moon, Crescent, Half, and Full. These modes not only effect how life and magic meters operate, but basic and special attacks as well. Taking these playstyle aspects into account, there is plenty of flexibility here to suit even the most seasoned fighting game professional’s preferred style of play.

The most important aspect of a fighter are the controls, and fortunately they are remarkably tight and responsive here. Melty Blood prides itself on being fast paced and combo driven, and even for an admittedly amateurish player like myself this game was very easy to pick up. Combos are very easy to chain together while simultaneously refraining from being hand-holding, basic and special attack commands aren’t overly complex, and animations are easy to follow and read. In addition, the main game window is presented in a 4:3 perspective, the remaining area of your 16:9 screen is dedicated to showing each character’s moveset. This is a very wise design choice as it has your moveset always at the ready, preventing any inconveniencing pause sessions to get a refresher on any given character’s moves. Though the game is capable of being played on keyboard, I would strongly recommend using a controller or hopefully a joystick if you have one, as it make the experience that much more fun to play.

The graphics, while certainly not worthy of any accolades today, still manage to have an air of a nostalgic charm. The sprites have a deliciously pixelated look to them (although there are HD filters you can apply if you so wish), and they animate wonderfully. Visual effects are on point as well, with each strike having just the right amount of “oomph” behind it so as not to distract you too much from the fighting going on. There are also a plethora of alternate pallette swaps for each character available, so you can customize your preferred character essentially to your liking. Backgrounds aren’t exactly the best offered in comparison to other fighting games on the market, but they do serve as a nice backdrop to have focus remain on the characters. All of this serves to make Melty Blood very easy on your PC when it comes to system requirements. In fact, this game could almost run on a literal toaster. It is nice seeing games get released on Steam that are fun and manage to look good while not being made with financially demanding setups in mind.

The sound is great in Melty Blood, easily on par with Capcom arcade games that utilized QSound. Each stage has very nicely composed music that sounds great on its own and is clear and crisp. Each level has its own unique music that fits the stage well and adds nicely to the energy of each fight. Sound effects are excellent as well, and have the right amount of “chop” to them to make each of your hits feel like they have the proper amount of weight behind them. Additionally, cutscenes before and after fights are fully voiced, and the actors do a fantastic job of matching their voices with the way the characters look. There is no dub option, so if Japanese voices aren’t your thing that may be a downside for you. The weeaboo in me loved it, however.

All in all, Melty Blood holds its weight very well against the bigger fighters out there such as Street Fighter and Guilty Gear. Its name if fairly ridiculous and it isn’t quite on par with a current gen AAA fighter, but its level of polish belies something one would expect to see from a small team of independent developers. It’s a fast, frantic, and above all else, fun title that most anyone can pick up and enjoy. Whether it’s a game you look to play on your own, with friends on your couch, or online, Melty Blood: Actress Again Current Code is a game I would highly recommend checking out if you’re looking for a fighter that lingers more on the side of the obscure and niche. 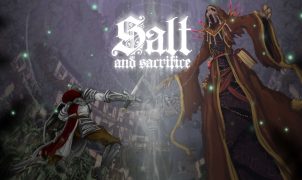 Salt and Sacrifice Review: Pleasure That’s Worth the Pain     It was just a little over a month ago that I previewed the long-awaited sequel to Salt and Sanctuary, Salt…