This fox is definitely destined for greatness You know what I used to freaking love when I was going through Middle School? Those Choose-Your-Own Adventure books. You know the kind, the sort that as you read, you make pivotal choices and progressed to the page that held the continuation of your adventure. Like a low-tech, well, adventure game. Yeah, those were pretty awesome. Imagine my delight, then, when the very embodiment of the CYOA (is that an accepted acronym?) books was married to classic action-RPG gameplay reminiscent of Baulder’s Gate: Dark Alliance with a cast of memorable characters and simply amazing narration. Indeed, Stories: The Path of Destinies seems to have it all, even if its title seems to leave a little to be desired.

You play the role of Reynardo, a fox with a vested interest in leading a rebellion against a corrupt empire. Looking to destroy the empire or die trying, players guide him through a series of areas infested with raven guards and deadly traps. Not all choices are going to see Reynardo safely through his adventure. In fact, most will invariably lead to his untimely demise. But the journey is long and varied, with over 25 outcomes to the story and a multitude of truths to uncover as you do so. The actual gameplay in Stories is actually pretty slick. Stage exploration is natural and not especially confusing, with a solid direction for players to follow and certain areas being gated off as players progress. While this will often prevent a player from backtracking if they had forgotten a chest, for example, players will typically not be penalized in ways that prevent them from progressing regardless.

While enemies are fairly plentiful, they will only appear in waves. Only when a wave is dealt with will Reynardo gain experience, which is tallied up taking enemy kills, style and whether Reynardo gets hit r not into consideration. At level up, players gain an attribute point that can be used to unlock new abilities, increase health, and more. Fighting is pretty fluid too, allowing for some pretty epic showdowns when done properly. Attacking with Reynardo’s sword is as simple as pressing the Square button, but parries, throws and magic sword attacks also enhance battle in fun and varied ways, especially when new and dangerous enemy types are introduced and thrown in for good measure. Chances are, you’re going to take a butt-load of damage in battle though. Smashing stage pieces like pots, crystals and the like will often yield curative items to recover HP and sword energy and sometimes, every now and again, a bit of ore. Blue Chests will also spit a bunch of ore, as well as elemental bits and the odd curative item while Red Chests really dish out the goods in the form of elemental essence and gems. Collected materials can be used at crafting carts to create and strengthen various hero’s swords in a variety of elemental types; as such, Hero’s swords are critical in opening doors of their respective element, often leading to the coveted Red chests. These carts are also where Reynardo can equip gemstones to enhance various attributes, such as skill speed, luck, physical and elemental resistance and more.

Not only are the areas to explore of fair length, a number of branching paths allows players to explore new facets to areas that they may have already played through, thanks to its New Game Plus-style system which allows players to carry over obtained weapons, gems, stat enhancements and materials. As players get stronger, enemy opposition will increase in difficulty too, even at the outset of a story arc. This can often lead to a swift death if players aren’t careful.

It’s super fun as it is, but what really keeps me coming back for more is the expert narration. Delivered by Julian Casey (Assassin’s Creed series, Watch_Dogs, Deus Ex: Human Revolution) complete with voice changes depending who’s speaking (yes, even the girls,) the story is constantly and consistently being told, even in the middle of exploration. Add to that some hilarious pop culture references (the ones from Star Fox and Starcraft are my favourites… so far) and bits and pieces of Reynardo’s back story (TWIST! It was him!) and not just the story but its delivery will surely keep players entertained, interested and coming back for more. And when I say “hilarious,” I truly mean it. Like, really laugh-out-loud like a lunatic funny stuff. Voice delivery aside, the soundtrack to Stories, not to mention its overall sound design is truly great stuff. Always fitting and never faltering, Stories definitely sounds as good as it looks; quite a feat, given that Stories is powered by the Unreal 4 engine, delivering some truly amazing looking environments, excellent lighting, environmental effects and particularly great shadows. It al runs pretty smoothly too, mostly at 30 frames-per-second, but with some areas rocking a solid 60 FPS. The only sticking point to the visual design are the character models of the supporting cast; they’re just a little too tall and a bit too spindly. Regardless, it’s all really just a matter of taste, as the rest of the art here is just fantastic. The airships in particular look like something taken straight out of Magic: The Gathering, with Reynardo’s ship, the Farfarer looking more or less like a scaled-down Weatherlight.

There are a couple of issues, but nothing crippling, since they seem to have been addressed and fixed already: Sometimes bits of a stage failed to load and there were times when Reynardo would get stuck in the ground or even fall through it (but reappeared and dropped to the ground where he fell through. Nice save.) But patches have also been added to deal with these issues, too. Good on ya, Spearhead Games!

Basically what I’m getting at here, is that Stories: The Path of Destinies is easily one of the most entertaining games I’ve played so far this year. Its definitely a game that I’m not soon to forget and one that for me – and especially for people out there that liked choose Your Own Adventure books like I did back in the day – works very well on every level.

Full disclosure: This review was based on review code supplied by the publisher. 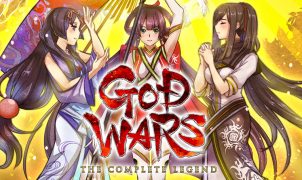